In a rain-soaked graveyard, a small group of men stands around a coffin bound with heavy chains. "We are here to mourn the passing of Jean de Cardeau," intones the village priest. " Let us pray that his rest is eternal and that he never returns."
As the pallbearers lift the coffin, something scrapes on the wood from inside. Quickly and without emotion, the attendants slide the casket into a crypt. Then they seal the door and flee. Behind them, unheard, a dull thudding begins, growing louder with the onset of twilight. There can be no peace for those who linger in the earthly realm after death. And there can be no sanctuary on the Night of the Walking Dead! Set in a zombie-infested swampland, "Night of the Walking Dead" is an ideal first-time Ravenloft adventure. Players must unravel the mystery behind a string of murders and disappearances in a village plagued by ambulant undead--and all is not as simple as it seems! The hour of fear is upon us. Are you ready to face the Demiplane of Dread?
For 4 to 6 players, levels 1st-3rd. 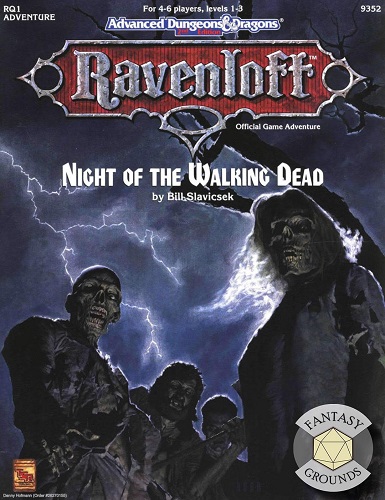