Escape Games are all the rage these days, in which players are locked in a room and must solve a series of puzzle to escape. The origin of the game varies depending on the source: someone's daughter heard about it in Europe, it was inspired by Agatha Christie's works, developers wanted to mimic video game challenges. Whatever their origin, Gen Con attendees have been playing escape games before they became so popular. 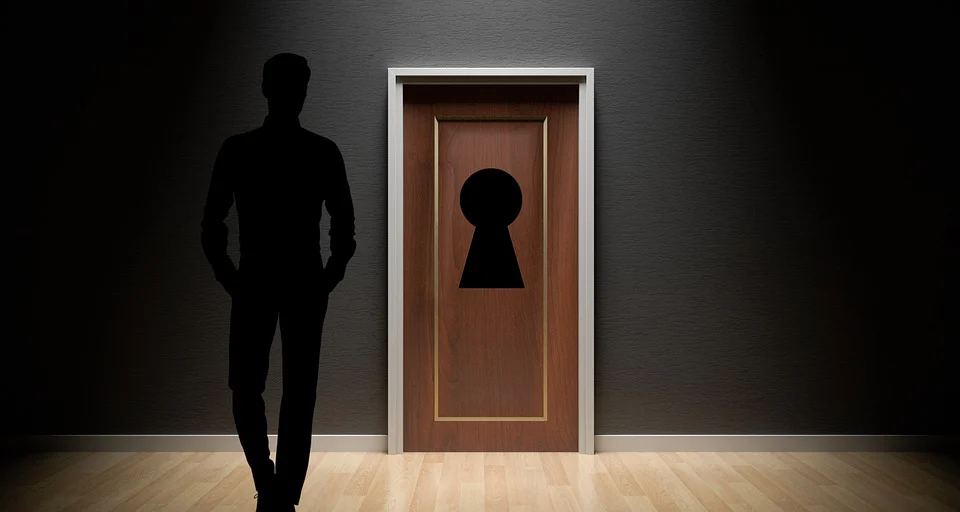 Escape games have a simple but effective structure. A team of disparate players (possibly strangers, although escape games are also used as team building events) experience a crisis inside a room. They must work together to solve a puzzle within a time limit (usually an hour), with the ultimate goal to escape the room. Sometimes, a guiding force (a non-player character who is part of the game) will give them clues. Escape games have experienced a massive surge in popularity in recent years. To get an idea of just how popular, see the this comprehensive list at the Escape Room Directory.

The parallels between an escape game and a Dungeons & Dragons are numerous. There's even a game master:

Escape rooms are live action team based games where players discover clues, solve puzzles, and accomplish tasks in one or more rooms in order to accomplish a specific goal (usually escaping from the room) in a limited amount of time. The escape room experience starts with the players meeting their gamemaster, who briefs them on what will be happening over the next hour and gives them the rules for the game. If there is a backstory, the players may watch a video or be given a passage to read. The door is closed and locked and a countdown clock begins.
Click to expand...


There are plenty of D&D trapped rooms that replicate this effect. Gygax's Tomb of Horrors comes to mind. The difference is that in D&D, players are taking on a role but sitting a table. Some escape rooms look a lot like tabletop sessions:

Most games cost $25 to $30 per person for a one-hour game, and typically allow 10 to 12 players at a time. For owners, the chief costs are payroll and rent, plus the one-time expense of building the room out. Some rooms comprise little more than a table with pens and paper.
Click to expand...

​
Players have been escaping rooms in D&D since the game debuted. It took True Dungeon to bring it to life in an organized fashion.

True Dungeon is descended from a combination of tabletop and Live Action Role-Playing (LARP) games which have existed since the 1960s:

The 1960s saw the creation of fantasy LARPs (as distinct from pure historical re-enactments), which probably originate with the founding of the Society for Creative Anachronism in Berkeley, California on May 1, 1966. A similar group, the Markland Medieval Mercenary Militia, began holding events on the University of Maryland, College Park in 1969. These groups were largely dedicated to accurately recreating medieval history and culture, however, with only mild fantasy elements, and were probably mostly influenced by historical re-enactment.
Click to expand...


True Dungeon took live action in a different direction. The players had roles, but those roles were chiefly game-based rather than role-based. And it all started with Jeff Martin:

The True Dungeon module that you will be running through at GenCon has a long evolutionary track that started in 1997, when Dungeon Master Jeff Martin decided to host an all weekend game-a-thon with five of his gamer buddies. This gaming group, consisting primarily of 1st Edition AD&D purists who favored combat tactics, problem solving and puzzles over role-playing and character development, were promised the best D&D adventure they had ever experienced.
Click to expand...


Jeff eventually turned to prop-making, which led to puzzle-making:

He even got so bold as to make actual physical puzzles for his players -- the hard part being the conjuration of original puzzles. To end this riveting tale, Jeff's first annual "JefCON" was a success, as the players thought his props and puzzles were very cool indeed. And as each year's JefCON took place, Jeff's wife saw less and less of her husband as he spent more and more time trying to top the previous year's D&D adventure.
Click to expand...


Dwarven Forge owner Stefan Pokorny played in one of Jeff's games and made the introduction to Peter Adkison, who was hooked:

To make this long tale find its happy end, GenCon LLC showed its vision and utter coolness by giving a large budget to a bunch of crazy gamers. Through a lot of hard work and heated debates (interrupted by soda runs, of course), these gamers fashioned a set of cool D&D rules. True Dungeon was born, and its first run in 2003 had 500 enthusiastic gamers. As with JefCon, DM Jeff and a horde of friends/volunteers/minions strive every year to top the previous year's adventure.
Click to expand...


If D&D is a distant ancestor of escape games, True Dungeon is most certainly a close relative:

Not a LARP, True Dungeon instead focuses on problem solving, teamwork and tactics while providing exciting sets and interactive props. Players may find themselves creeping down a dark passageway and entering a long-forgotten crypt. After dispatching a lurking guardian, the players may have to solve a cryptic puzzle or find a secret door in order to gain a wondrous treasure chest. This might be a chest that might hold a shocking surprise if opened without care. It takes two hours to explore the dungeon, and teams of ten players need only bring their imagination and quick wit.
Click to expand...


It's clear that True Dungeon and the escape games that followed are a new form of gaming.

Escape games proliferated in Asia (Beijing has over 180) and spread to the U.S. with over 20 in LA. They drew their inspiration from a variety of sources:

About 65% of the survey respondents said that their inspiration came from playing in or learning about another escape room; common organizations named were SCRAP from Japan, Parapark in Budapest, Hinthunt in London, and Escape the Room in NYC. The rest of the respondents were not aware of other escape rooms when they started. Their inspiration came from a variety of sources. A few of them were inspired by adventure movies like the Indiana Jones series or horror films like Cube, Saw.

Uncoupled from their fantasy origins, escape games follow the flow of popular culture. Only 12% of the escape games surveyed were fantasy-based, with the majority taking place in the modern era.

With such a varied origin, escape games are something new: live action exploration without role-playing. Escape games and True Dungeon lack the RP of LARPs but have more physical interaction than D&D. Dr. Nicholson recommends using the phrase "live-action adventures" to categorize the new genre.

It's an exciting time for role-players. Live-action adventures can act as a gateway for future role-players. The escape rooms, if their solutions are ever published, can also make for fun dungeon puzzle rooms. It may well be worth it for enterprising game masters to pitch their games as "escape room games without the room."

All this time, D&D gamers sitting around a table have been escaping rooms in their minds. Now that the rooms have been brought into the physical space, the basic concepts of role-play are being enjoyed more than ever before -- even if they're not playing a role.
Last edited: Sep 2, 2022
Click to expand...


I recall Monte Cook blogged about running a game where the players entered the game world. IIRC they could bring with them whatever they could grab in the room within the next few seconds!


There was some heartbreaker RPG where the players played themselves, but I forget the name.


Anyone know of RPGs where you play yourself?


I'm surprised it hasn't been a more common entryway for RPGs. Like the Kids of the D&D Cartoon Show. I suppose TSR got scared of mixing fantasy and reality. Now that the 1980s D&D-scare has passed, I think WotC ought to issue a book about that.


Yeah, there's a spectrum within that:


A) Trying to exactly model our six ability scores. Which I imagine could hurt feelings - like, hey, why do you have a higher INT, WIS, or CHA score than me?
B) Looking exactly like ourself, but having whatever ability array we choose. We might just be a lot stronger (or charismatic or wise) than we look.
C) Having the same facial features, but body is visually enhanced (or atrophied) to match the ability scores we choose. Like a super buffed up version of ourselves.
D) Same mind (and maybe facial features), but another body, incl. other fantasy races.

Polyhedral Columbia said:
Anyone know of RPGs where you play yourself?
Click to expand...