Completing the holy trinity of the Justice League, the Dark Knight - Batman! 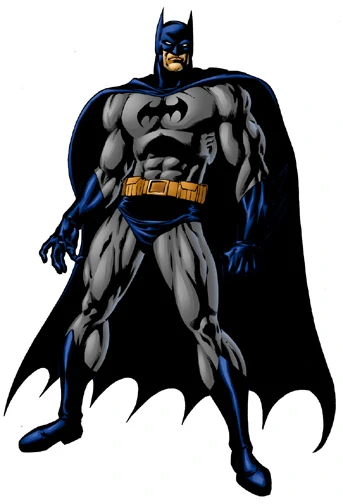 Batman vs “Batman with Prep”: The saying goes that Batman can basically beat anyone if you give him enough prep time. I think the best way to handle this is effectively stat out two “forms” for the Bat. In his first form we will make him the peak of mortal power, but still weak compared to many other leaguers. Then we will give him an epic boost if he has time to prepare, allowing him to challenge and even beat other members of the league.

CR: 20 for Base Batman. This seems an appropriate level for the peak of humanity. For Batman with Prep, we will put him at a CR 26, a match for Superman and capable of victory against any other leaguer.

Master of Skills: Batman is a true renaissance man, and is proficient on almost every skill there is. He is then an expert is several skills, like intimidation, stealth, and athletics, acrobatics. Further, Batman is incredibly consistent with his skills (no mortal could stand in his arena if they made mistakes), so we will give him the reliable skill talent. Some will argue that Batman should be an “expert” in everything, but I think there are skills that Batman has that are clearly better than others, and he is not the best at singular skills….even among other humans. So regular proficiency should be more than sufficient.

Intimidating Aura: Batman is the scariest leaguer there is, which we could showcase by simply giving him a lot of intimidation. But it’s a bit more than that, Batman seems almost “innately” intimidating. People are scared just to approach him. Even further, Batman doesn’t even have to show his face, often criminals often become fearful just with Batman in the area. So to highlight this, we are going to give Batman a fear aura.

Stats: Batman is often described as the epitome of humanity, both physically and mentally. I can think of few more suited for a 20 in every stat than the Bat.

Control over Damage: While Batman does good damage compared to the goons he often fights, compared to the other leaguers he does very little damage and rarely is the one “beating up” the big bads (at least big by Justice League standards). Instead he acts as a controller, applying a wealth of conditions and distractions that ties up enemies until he either wears the creature down, or until another leaguer finishes the job. So we will use this model in his attacks, lower damage but very strong condition application. This will change a bit when he gets his prep time, which will translate into a major damage boost for Bats.

A Gadget for Everything: A Hallmark for Batman is his gadgets, I think we could safely say that the utility belt was the inspiration for the bag of holdingJ. Any static list is not going to going to do justice to the insanity of things Batman can unleash, so I will provide some flexible options for the DM here, who could creatively use anything he wishes.

Even when down, he’s never out: A common theme for Batman in the cartoons is that even in the rare instance you get him down, he is two steps ahead, and releases some trap or distraction he had already planted that buys him time he needs to recover. We will incorporate a version of that into his character.

Filthy Rich: Batman is ridiculously wealthy, so its easy to just note that he can buy anything he wants, GP wise. But not just money, but his resources allow him to acquire incredible technology, and is a part of his ability to “prepare for anything”. Since tech is approximate to magic in Dnd terms, we will give Batman the ability to acquire magic for the tasks at hand…. But we will add some non-magical attributes to make it more techy.

Tracker: Something Batman does a lot of in the animated movies is placing trackers on people who get away…no one gets away from Batman! So we will give him some high level abilities in this area.

Beyond Evasive: Even though Batman is mortal, many of his feats of dodging are pretty special. He is dodged explosions, automatic gunfire from dozens of weapons at once, even Darkseid’s Omega beams! So we are going to give Batman an extremely strong avoidance power, to highlight how is able to stick it out with the other leaguers. This will also showcase how goons just can’t hit Batman.

Insane Willpower: Batman’s mind is often touted not just for his intelligence, but his immense mental fortitude. We will note high saves for him in mental areas to highlight this quality.

Because I’m Batman: It’s a bit of a joke in various shows and cartoons, but the idea that Batman can do certain things “because he’s Batman” is a fun part of the narrative, and I will include just a hint of it for fun.

Alertness: Batman gains a +5 to initiative rolls and cannot be surprised.

Combat Reflexes: At the start of an opponent’s turn, Batman regains all of his reactions.

Evasion: Batman suffers no effect when he passes a dexterity saving throw, and takes only half damage when he fails.

Intimidating Aura: Anyone who starts their turn within 100 ft of Batman (even if they are not aware of his presence) must succeed on a DC 18 Wisdom saving throw or become frightened for 1 minute. Batman can choose to exclude creatures from this effect.

Wonderful Toys (1/long rest): After a short rest, Batman may acquire any item that has a GP cost. He may instead acquire an item that can cast any 5th level spell. The item can cast the spell up to 3 times, but it must be the same spell each time. These spells are not considered magical, cannot be dispelled or counter spelled, and do not detect as magic.

Tracker: The first time Batman successfully attacks a creature in melee, the target makes a Wisdom (Perception) check vs Batman's Dexterity (Sleight of Hand) check. If the target fails, a tiny object is placed on them. As long as the tracker is on the same plane, Batman knows its location.

Master of Skill: When Batman makes an ability check, if the die result is 9 or less, treat the result as a 10. Batman may perform Dexterity (Stealth) and Intelligence (Investigation) checks as a bonus action.

Two Steps Ahead (1/short rest): At the start of his turn, if Batman is unable to use actions, he may use the Contingent Trap action. He may immediately make a new saving throw against any condition affecting him that allows saves.

Ninja Arts: Batman adds his wisdom modifier to his attack and damage, and his base damage is a d10 (noted in his statblock). If he has advantage on the attack, any maneuver’s saving throw is made at disadvantage.

Tactics: Whenever Batman hits with an attack, he may add one of the following conditions to the attack. All saving throws are DC 18 and noted in parenthesis. The condition lasts for 1 minute unless noted, and the target may make a new saving throw at the end of each of their turns to end the condition.
Dark Knight Rises: If Batman spends 1 week researching a target (or an adventuring party), he may uses his Epic Traits against that target or party. See The Dark Knight for details.

Utility Belt: Batman may produce and immediately use any tool or piece of Adventuring Gear.

Contingent Trap: Batman chooses a 10 ft radius area within 100 ft. Batman does not need line of sight or line of effect to target this area. All creatures within this area are subject to one of Batman’s tactics. See Tactics for more information.

REACTIONS
Absolute Evasion: Batman can turn one successful attack against him into a miss.

Martial Arts: Batman makes a Punch, Baterang, or Utility Belt action.
Slippery: Batman may attempt to escape a grapple. He moves his speed without provoking an Opportunity Attack.
Vanish: Batman can take the Hide action.


The Dark Knight (Epic Traits)
Against a target that Batman has used his Dark Knight Rises ability against, he gains the following traits. When using these traits, Batman is considered a CR 26 creature.

Offensive CR: 16. Batman is doing 60 damage a round, but with a massive +16 to hit. That gets us to CR 14. Factoring in that he is also releasing an enormous amount of status effects every round, that is worth at least a +2 CR bump.

Defensive CR: 24. Base stats start at a homely CR 9, but there is so much to do! So I am using Resistance for Batman’s Absolute Evasion ability, as that plus his combat reflexes means he is automatically dodging one attack from every opponent every round, and as most fighters get 2 attacks that’s a rough 50% damage negation. We then throw in his fear aura, his stealth as a bonus action (similar to goblin’s nimble escape), and his 4 saving throw bonuses…which rachet him up to CR 24.

Offensive CR 28: With the double damage of vulnerability factored in, that jumps our DPR to 120, and advantage on all attacks we consider a rough +3 to attacks. That’s CR 26, and then again a +2 to CR for the crazy amount of conditions (including the new knockout option).

Defensive CR 25: Now that Batman can auto dodge twice per target’s round, we are going to consider that like immunity (as many creatures will just not be able to actually damage Batman). Also, Batman gets a +3 to his AC for having the disadvantage ability.

This is brilliant, I do like how you’ve modelled The Dark Knight as Epic Batman. Just reading through the abilities you’ve given him has me intimidated as I imagine just how difficult he would be too face.

My Girlfriend was intrigued by this ability till she read it.

Flamestrike said:
My Girlfriend was intrigued by this ability till she read it.
Click to expand...

We can't forget there is a future Batman the Gotham Chronicles d20 RPG, with the stats for Batman as nPC. Batman also has got stats as nPC for the Mutants & Masterminds sourcebook about DC universe.

My suggestion is to create an alternate DC elseword created by "shards" of worlds destroyed or altered in the last multiverse crisis. Here in one of the worlds the power level totally different, because everybody potentially can become superhumans. How? easy reason, as the cultivators from xianxia fantasy novels. Then batman or green arrow could defeat doomday or darkesid (as in Injustice videogames).

I like Shadow monk better. He literally spent a lot of time in a 'not Ninja but Ninjas' monastery learning to beat people up, and is apparently a master of several forms of martial arts.

He has the following magical items:

While you hold this item in your hand you can fire a grappling hook with a rope attached as an action, tethering the rope to a fixed point within 60' you can see. Until the start of your next turn you gain a 60' climb speed that can be used to climb the rope.

This functions as a robe of useful items. Its charges replenish daily at dawn.