the DCC RPG book serves all needs for all people, and languages like 'Lizard Man' or 'Elf' are generic. Too generic. If monsters are supposed to be weird and wonderful, and our inspiration is Appendix N, would a backwards tribe in Michael Moorcock's world speak Elven, or would they speak Eq'uel'tabalaa?

Here's the chart we use in our campaign to determine languages. It's got the alignment languages and the standby languages of Dwarven, Elven, Demonic, Druidic, etc, but many of them have evocative names. I've also thrown in some regional human languages, campaign-specific monster languages, and some other nice things like a magic-specific script.

Enjoy, and may your tombs be filled with antediluvian texts, your whispers in tavern corners be mysterious, and your rings of power have inscriptions you dare not utter in the tongue of the Grue! 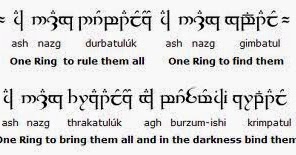 T he DCC RPG rulebook serves all needs for all people, and languages like 'Lizard Man' or 'Elf' are generic. Too generic. If monsters a...

Nice! Thanks for sharing. As someone who has lived in a number of countries, the simplicity of how languages are dealt with in most TTRPGs is rather unfulfilling. I understand that the abstraction and simplification helps GMs run games and let's players focus on what they most find interesting. Communication challenges are not interesting to most players, I would guess, especially if it is a constant and common element of the game.

What I tend to do is assume that along major trade routes, larger towns, etc. that most of the merchants and educated people speak sufficient common (or the common language for the region they are in) that communication issues do not come up. But when they get to more remote areas, travel far outside their region, etc., I like to throw in communication challenges so that the languages you know matters and to give a sense of verisimilitude.

Another thing I like to do, instead of focusing on whether you are able to communicate or not, assume that the players can communicate in common, but if they know the NPC's mother tongue, perhaps they get advantage on persuasion checks, etc.

You are right there!

Harnmaster RPG had a great language world map that showed the different language families, and had rules for people trying to communicate from the same language tree. They also had a rule for their percentile communication skills like Persuasion that couldn't be higher than the actual language skill being used to communicate, so someone with a broken language skill of 31% could only have a Persuasion of 31%.

In my campaign world Auldpater is the traveller's tongue, so 'how much for those apples' and 'I need to stay the night in your tavern' would be common phrases that people would learn and use that language for.

I loved the chart for real modern languages in Champions/HSR 4e...

And the similar one in Dragon Warriors.

But when I'm running a typical fantasy game I'm glad that the language handling is usually abridged. I'm fluent in one language (English, comfortable with the Western US, Alaskan, and Western Canadian dialects), conversational in a second (ASL), used to be conversational in a third (Russian), have made efforts to study 3 more (Spanish, Japanese, Church Slavonic), dabbled in study of 3 others as well (Latin, Hebrew and Arabic)... I can order from the menu in Spanish, Russian, or Ukrainian, and have a decent idea of what I'm getting. I've also studied pronunciation but not the language itself (Italian, Haut Deutsch, French, Scots, Irish, Polish, Russian Church Slavonic, Ukrainian)... and pronunciation often renders French or Italian inteligible enough to get the gist.

Plus I'm conversant in several dialects of BASIC, was at one point truly fluent in VAX Basic (able to execute code bitwise accurate using only an ascii chart, pencil, and copious graph paper - the final was closed book execution of code...), able to work in C/C++ for console-level to a basic level (sufficient to execute console code manually, never really got functional with GUI interfaces), Comfortable in console python. Dabbled in Logo. Found Hypercard difficult, but doable, and NewtScript wonderfully intelligible.

I am really glad that most games simplify language heavily. Because it's insanely convoluted in the real world.

Hero System's 0-5 scale works really well, but it's overly complicated for when I'm playing a fantasy game, and having to remember which language is which, but in a Victorian to modern Earth, or close parallel with the same nations (EG: Champions setting, Space 1889, Deadlands, Castle Falkenstein etc), it's quite good for buy-in and verisimilitude, as modern education already makes us aware of their nations.

Likewise, in Dragon Warriors, the human tongues have clear relationships... but not the non-human ones.

I'll note also that many languages are essentially referred to by something other than the name the speakers use. Deutsch is normally called German by the English world, Po-Nemjecki in Russian, etc. Japanese is known in Japan as Nihongo (日本語).

So, while labeling the language of the local elves as "elven" may be mildly unrealistic, it's much simpler, and unless they've been dominated by the elves, local humans are unlikely to care what the locals call it..