If you want your adventures to take place in a large fantasy setting that encompasses different civilizations, cultures, pantheons, technologies, perhaps even actual rules... do you prefer to set them in a different region/continent of the world on a single plane of existence (e.g. Forgotten Realms), or do you separate them further on different alternate material planes (e.g. Magic: The Gathering)?

For the sake of discussion you should not be thinking of extreme or obvious cases. Preferring the "different regions" approach doesn't mean you have to set also heaven & hell on the material world, and conversely preferring the "different planes" approach doesn't mean that every elven or orcish kindgom must be made extraplanar.

The choice is interesting when you have to choose what to do with a non-obvious case, since there are pros and cons to both approaches. Think for example of something like Ravenloft, oriental adventures, or other places strongly based on real-world civilizations of the past such as Maztica, Mulhorand or Al Qadim. Would you rather make room for these within your single-plane fantasy world or make them separate planes and why? Consider also whether it makes a difference if you are adding them before the start of a new campaign or during the adventures of an existing group.

I am asking because when I started DMing ~20 years ago I first followed the "Great Wheel" cosmology with a single material plane, but later I realized how boring it was for me to have everything so orderly organized, so I began watering down the cosmology to be less-defined and rewriting many outer planes as alternate materials (because I find them interesting to use for adventures, but fairly dumb as someone's "afterlife"). However, I kept assuming that I would add to the main material plane everything that wasn't differentiated by different laws of physics, or just couldn't fit together as a whole (for example, setting an adventure in a non-afterlife version of Acheron still required me an alternate plane because of its disintegrated geography), while adventures like Desert of Desolation would normally prompt me to just add an appropriately-themed region somewhere in the material world. OTOH the M:tG planar approach has its merits: it allows greater room for changing how things work in a new region without having to explain why nobody has previously heard about it or how it interacts with the rest through the ages.

There is also a third and somewhat intermediate approach, that of "different planets", although it can deliver too much of a sci-fi flavor to some. I don't think the core rules usually support this idea directly, and instead just suppose that the material plane is a single planet: when the RAW says that a teleport spell can take you anywhere on the material plane (no range limit) it's not really because it's designed to allow you to teleport to the other side of the galaxy, it's because it assumes you would never do it. Nevertheless, it's still a valid possibility, whether you decide to keep that teleport spell as-is, or amend it and then presumably add your own rules for travelling between planets.

So what is your take on the subject?

My campaign world takes place on the inside surface of a giant air bubble approximately one million miles in diameter. There's a lot of room for different stuff going on there, and very little has been explored by pcs. That bubble is set within a cosmology that is filled with different planes, each (well, most, anyhow) of literally infinite extent.

Generally, if I want different cultures, elsewhere in the world is enough. If I want to use different rules or rule sets, I use another plane.

Supporter
The homebrew world I'm running on is pretty new, but at this point most of the other cultures are probably going to be on the world, not in other planes. Earth is and has been host to many cultures, so I see no reason why a fantasy world (which in my case is explicitly a lot like Earth) wouldn't be. I'm using the Great Wheel Cosmology (very much mostly, at least), primarily because it's less work when it comes to explaining it to the players. I can say something along the lines of, "The Planes work pretty much as described in the DMG, with some exceptions ..." and be done with it; I don't have to work out and write up the entire arrangement of the Planes and the world's place therein.

That's a fascinating question! I haven't really thought about in a while.

In my opinion, it's very hard to avoid "Star Trek-itis" when it comes to populating areas (whether they are planes, realms, worlds, or countries within a single setting). In other words, it's like watching the Enterprise go to a different planet, where that planet has a monolithic culture that is typified by a few traits (and/or forehead ridges).

It's very hard to capture real diversity. Imagine if someone said that, for example, all of the UK or all of the US was exactly the same, not realizing that there was differences between regions, or cities, or even within regions and cities!

More often than not, either out of laziness or habit, I prefer to keep places separate; I think it's easier to have a well-defined homebrew campaign world, and to leave true variety to places that players must be more diligent about traveling to (alternate worlds in the Prime Material, or outer planes, for example). It could also be due to a lingering distaste for how the Forgotten Realms devoured so many settings. I liked it much better when it was just the 1987 boxed set, but I might be alone in that.

I have become Toril, destroyer of settings.

the system I currently use:

The Ethereal Plane is the bridge between the Material Plane and the Astral Sea, Elemental Chaos, Shadowfell, and Abyss.

The Material Plane is a super-kitchen sink, where each setting (Forgotten Realms, Dark Sun, Mystara, etc) is a different planet orbiting a different star within the same universe.

My buddy’s setting that I love playing in has just the material plane, hell, wherever angels come from (no one knows), and the border ethereal. The Feywild and Shadowfell are just places in the world, and most of the other planes just aren’t interesting enough to anyone in the group to bother with.

In the space opera setting we are building, the Feywild and hell are regions of space, and if you piss of a demon they may just come after you, and follow you through space all the way to your home.

Theres an old Pirate themed maze runner game where you controlled a pirate ship that had to avoid enemy ships, canon fire from towers etc in order to collect treasure and reach the portal to the next realm/level. Your ship could collect weapon upgrades (I remember the lightning gun) and one realm even featured a
dragon.

Anyway I liked the game so much that I used it as a setting for my version of Spelljammers where PCs navigated the Portal network across the Astral Sea and could thus enter various Realms (as Realms I used the Isle of Dread, another one with a Skeleton Island theme, an Aztec theme, a sci fi cyber (lasers and drones) theme and a dragons and vocanoes theme).
Last edited: Jun 13, 2020

Bitbrain said:
the system I currently use:

The Ethereal Plane is the bridge between the Material Plane and the Astral Sea, Elemental Chaos, Shadowfell, and Abyss.

The Material Plane is a super-kitchen sink, where each setting (Forgotten Realms, Dark Sun, Mystara, etc) is a different planet orbiting a different star within the same universe.
Click to expand...


Mine is almost like yours, except you explained it much better and simpler. I made a planar chart. 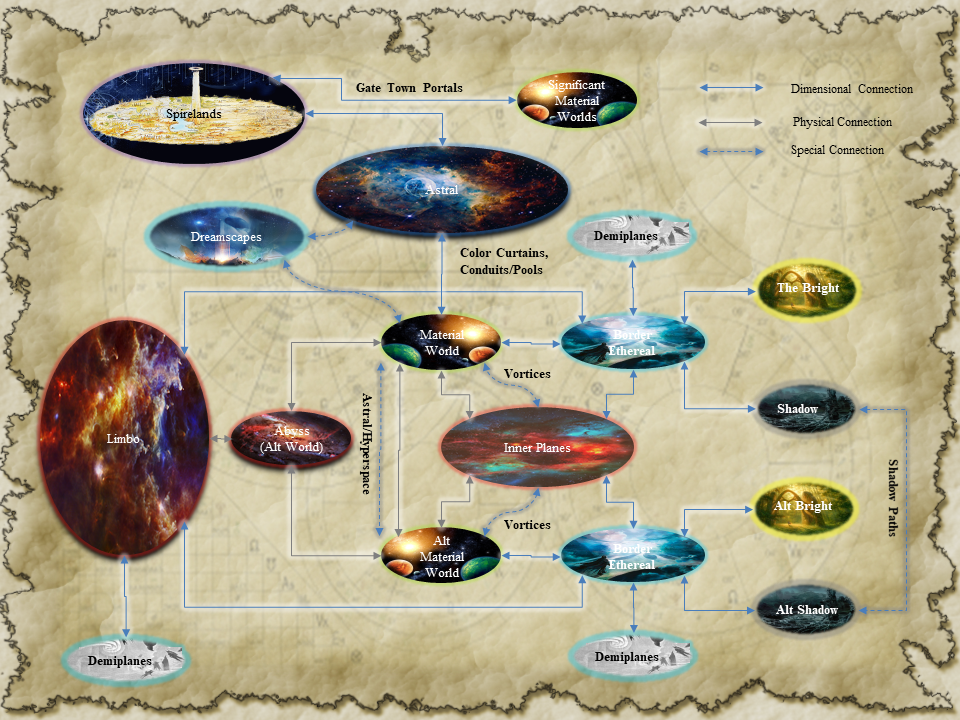 For different cultures, there's plenty of room in my world. I haven't had to address the issue of different rules/settings, but in practical terms I'm not sure I'd see much difference between "different planets" and "alternate material planes". For any one campaign, I think I can create plenty of problems for the PCs on one world, and on the off chance that the question of traveling between places ever came up, it's going to be via magic anyway, not spaceships.

I guess there is the issue of various rules that refer to being "on the same plane". I suppose my answer might derive from how I want those to work. Or I might just change how they work.

I run most things in my Known Cosmology that consists of a Prime Material Plane (PMP), 3 Transitive Planes (Shadowfell, Feywild, Ethereal), 1 Elemental Plane 1 Astral Plane, 1 Heaven Plane, and 1 Hell Plane. A separate entire Cosmology, the Far Realm, is crashing into the Known Cosmology. There are also a bunch of pocket dimensions off the Astral Plane, but I find that simplified model works wonders.

The PMP has a GIGANTIC primary world (rough 2000 the surface area of Earth, although most of it is covered with water). There are hundreds of additional planets in the PMP. This allows me to put almost anything in my known universe.

However, I also run games in different settings, like the Forgotten Realms, that use traditional Great Wheel Cosmologies. I have connections between these campaign settings and my Known Cosmology.

Honestly, except for major technological and rule differences, you can have pretty much anything all on the same planet, but in a different region/continent. A culture that has advanced enough to be able to travel the globe, however, would significantly impact every other culture, so they are best left to other planets or alternate planes (for a single use campaign, this could be an interesting idea to have the expansion enter the PCs region). A spacefaring race could be on another planet, with limited interaction with the main planet, but then you get into sci-fi, which you wanted to avoid.

Unless you have a very specific reason why the laws of the universe work differently in a region, that's going to need to be another plane of existence. Even if you have a cool reason for something, you really shouldn't pull it off more than once, unless you expect such radical changes to be the norm for the entire world. Some players might enjoy Weirdworld, but I imagine the novelty would wear off quickly for many.

D&D General Which material planes do you like in your cosmology?
2 3

D&D 5E The Tale of the First World: What Do We Know About it and How Does it Connect to the Rest of the Lore? (+)