The Dragon Issue 23 was published in March 1979. It is 32 pages long, with a cover price of $2.00. In this issue, we have permanent damage rules, variant rules for En Garde!, and a random fiend generator! 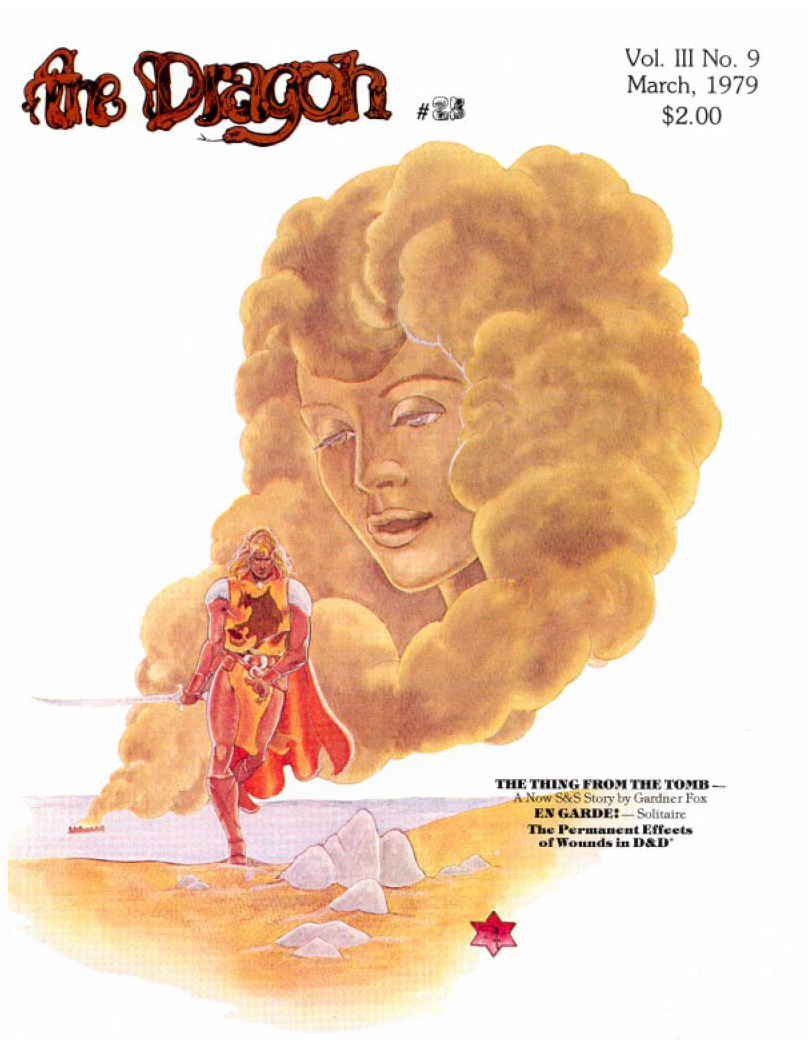 ​
In the editorial, Tim Kask discusses the upcoming convention season and notes that Origins will be late this year due to some organizational problems. He then criticizes the convention more fundamentally:

"The entire concept behind Origins is faulty and self serving. From the onset, AH and SPI have treated Origins as theirs, rather than the hobby's. Under its present format, Origins serves the manufacturers first, and the gamers second. AH and SPI expect to be able to find a group of volunteer gamers willing to hustle their collective butt off, so that the lustre of the show accrues to them (AH and SPI), while the work, sweat and hassles all fall to the misused volunteers."​
And so the toxic rivalry between TSR, SPI, and Avalon Hill continued. As it happened, three years after Kask wrote this, TSR bought SPI. About twenty years later, Avalon Hill was acquired by Hasbro, who also later acquired all of TSR's former assets. A little ironic!

A full quarter of this issue is taken up by "The Thing from the Tomb," a new story from Gardner F. Fox, who is best known for his work in comic books. Kask frequently defended the inclusion of fiction in the magazine as necessary grist for the imaginative mill. But readers complained that these very long stories severely restricted the amount of gaming content provided, and they surely had a point.

An article called "En Garde in Solitaire" includes variant rules for En Garde!, an RPG published by Game Designer's Workshop. En Garde! was primarily written by Frank Chadwick, one of the finest game designers to emerge from this period. Chadwick's other credits included Traveller (with Marc Miller), Twilight 2000, Space: 1889, and the massive Europa series of war games. The variation proposed in this article allows players to conduct duels in solitaire play, something not covered by the original rules. This contribution is noteworthy because it was so rare for The Dragon to publish variant rules for non-TSR RPGs.

"Water Adventures on the Starship Warden" is a collection of aquatic monsters for use with Metamorphosis Alpha. The layout for the monster statistics is confusing, and some of the monsters lack imagination, with entries such as the sharkoid and the sea flyer. I rather liked the brain fish, however.

The remaining feature articles are devoted to D&D. In "It Weighs WHAT?!!!" Michael Mornard disputes the excessively heavy weight given to armor and swords in RPGs. Citing historical examples, he puts the weight of plate armor at 60 pounds, mail shirts at 20 pounds, and swords between 2 and 5½ pounds. These figures all align nicely with the 5e Player's Handbook, by the way. Interestingly, Mornard was the only person to have a regular character in both Gygax's Greyhawk and Arneson's Blackmoor campaign.

A short article called "Dungeons & Prisons" suggests a new solution to the "problem" of high-level characters. The author proposes that DMs embed a few escape-proof prisons in their dungeons to trap the unwary and take them out of the game for a while. It's a contrived solution, but it shows that the difficulty of finding appropriate challenges for high-level characters has been part of the game since its early days.

In "Mind Wrestling," we have variant psionic rules that try to capture the presumed ebb and flow of a mental battle. In "Damage Permanency," Jim Ward gives us a permanent injury table, somewhat similar to the "Lingering Injuries" table now found in 5e. Interestingly, Tim Kask includes an editorial note disputing the idea that hit points correspond to anything physical at all. He states, "hit points represent the ability/facility to evade a fatal blow/injury. It is an abstraction that includes such considerations as fatigue, armor durability, fighting technique, fighting "tricks" learned, and so forth."

The best article in the issue comes from the pen of Gary Gygax. In his "From the Sorcerer's Scroll" column, he includes random tables that generate creatures from the lower planes. Similar tables appeared in previous issues, but this one is much more sophisticated and colorful. Using them, I created a rotting fiend with a spined bat-like head, slitted eyes, a long, humanoid body, tentacled arms, and bluish, warty skin. Did Gygax use these tables to create the fiends in the Monster Manual? It seems possible.

Next issue, we have more Monty Haul, another variation on psionics, and the return of the letters column!

This article was contributed by M.T. Black as part of EN World's Columnist (ENWC) program. M.T. Black is a game designer and DMs Guild Adept. Please follow him on Twitter @mtblack2567 and sign up to his mailing list. If you enjoy the daily news and articles from EN World, please consider contributing to our Patreon!

Super fun read. I was a kid when I started playing and only got cast off dragons from older kids who were done with them. I spent hours perusing them so it's fun to get a window into other issues!

Heh, thirty years before 4e, we already had HP=Meat arguments.

Another great article - thank you for sharing!

Some of these articles sound very familiar, but the cover doesn't. Were any of them in any of the Best Ofs?


Heh, even more "hilarious/interesting", given this unambiguous description of Hit Points as released in the AD&D Players Handbook a year prior:


Gary Gygax & al said:
Each character has a varying number of hit points, just as monsters do. These hit points represent how much damage (actual or potential) the character can withstand before being killed. A certain amount of these hit points represent the actual physical punishment which can be sustained. The remainder, a significant portion of hit points at higher levels, stands for skill, luck, and/or magical factors. A typical man-at-arms can take about 5 hit points of damage before being killed. let us suppose that a 10th level fighter has 55 hit points, plus a bonus of 30 hit points for his constitution, for a total of 85 hit points. This is the equivalent of about 18 hit dice for creatures, about what it would take to kill four huge warhorses. It is ridiculous to assume that even a fantastic fighter can take that much punishment. The same holds true to a lesser extent for clerics, thieves, and the other classes. Thus, the majority of hit points are symbolic of combat skill, luck (bestowed by supernatural powers), and magical forces.
Click to expand...


(Thus I would say Tim Kask's editorial in the Dragon magazine article doesn't dispute anything insofar as reiterate/remind what was so and intended within the game rules. )

Thanks again M.T. I love hearing what was in Dragon mags. I still grab random ones from my shelf to read regularly


I don't know anyone from back in the day in my group (1974 and later) who didn't believe that increasing hit points were the result of increasing skill / ability and, in general, immaterial factors (luck, the gods favor, etc.). The alternative would be... weird

Thanks for another trip down memory lane M.T.. Love it. It sparks the memory and helps bring back ideas that I haven't thought of for years.

I was not a fan of Gardner's Niall (if I recall the name correctly) stories btw... I think Conan pretty much wore out the "barbarian hero" trope. And did it better. I read pretty much all the science fiction and fantasy I could get my hands on then. I didn't need random fantasy stories cropping up in the Dragon and eating up pages.

R_Chance said:
I don't know anyone from back in the day in my group (1974 and later) who didn't believe that increasing hit points were the result of increasing skill / ability and, in general, immaterial factors (luck, the gods favor, etc.). The alternative would be... weird
Click to expand...


People are.... well, people. Nothing, not reason, logic, or even words in the DMG can alter that