TSR Periodicals published The Dragon Issue 24 in April 1979. It is 48 pages long, with a cover price of $2.00. In a packed issue, we revisit psionics (again), Monty Haul returns, and we finally hear from the readers! 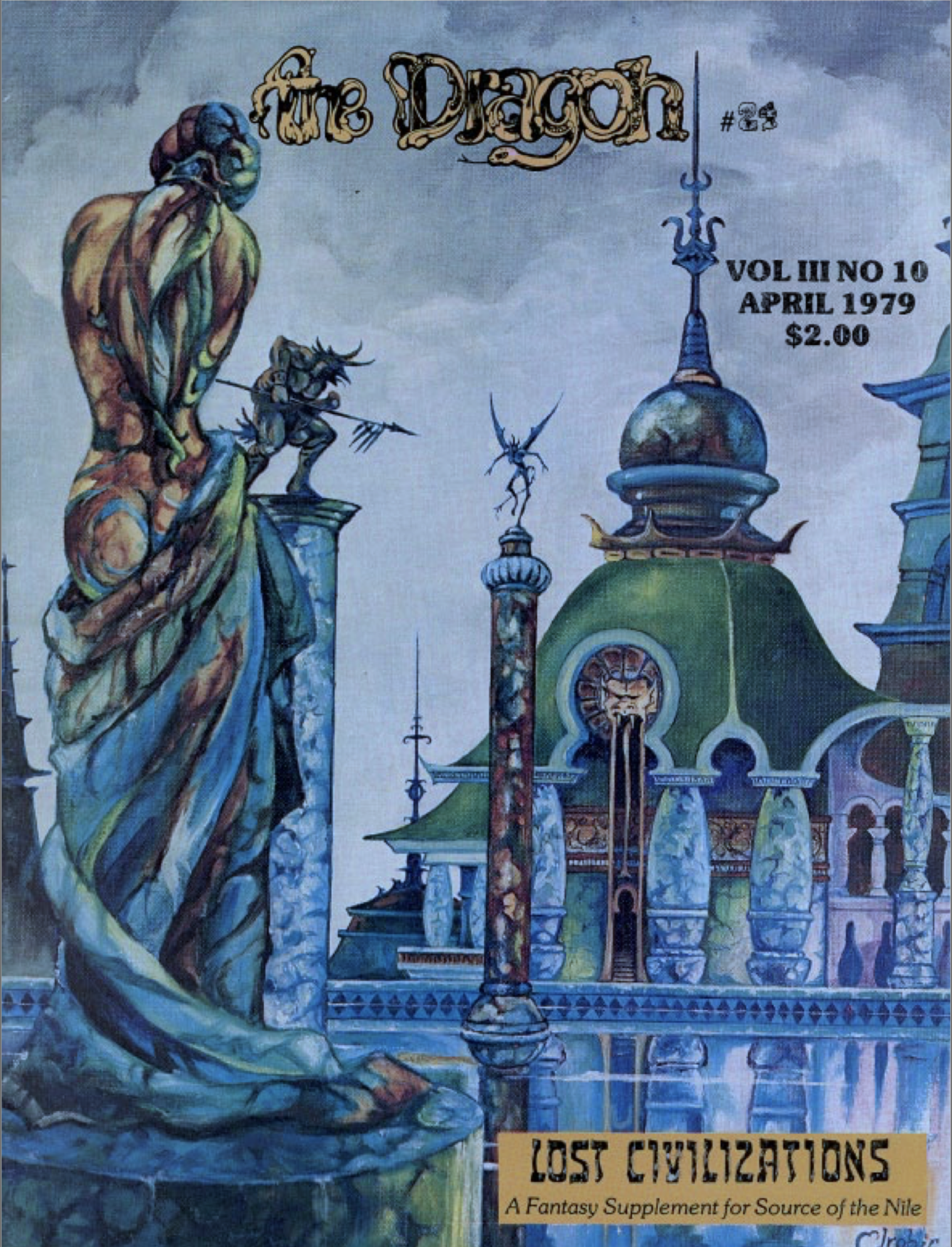 Tim Kask discusses the new format of the magazine, the result of a merger with Little Wars (see issue #22). Kask wants The Dragon to become "THE magazine of gaming, whatever the form." TSR Periodicals have no plans to diminish their coverage of fantasy and roleplaying games but plan to increase their coverage of miniatures games and board games. Kask wants gamers to stop being so parochial about their preferred form. He grandly proclaims that "This magazine intends to be the tool that allows this interfacing of ideas, concepts, approaches and genres."

There is a good selection of the sort of articles previously published in Little Wars. "A Viking Campaign in the Caspian Sea" describes a miniatures wargame scenario, complete with background information and the order of battle. Part 2 of the "Armies of the Renaissance" series chronicles the Swiss forces from that era, while "Bergenhone '77" recounts a recent international tank gunnery competition. Much to the chagrin of the writer, the Americans did poorly.

Gary Gygax contributes "Roman Military Organization," which provides updates to his own Classic Warfare miniatures rules. There is also an article relating the history of the Society for Creative Anachronism, and another describing Conán mac Morna, a figure from Irish mythology.

Two articles deal with boardgames. "Lost Civilizations" is a fantasy supplement for the Source of the Nile boardgame, which TSR seemed to be promoting heavily in their magazine. Meanwhile, "Dungeon - more variations on the theme" provided alternative rules for the ever-popular board game.

This issue announces the winner of an art competition named "Featured Creature." Although the quality of submissions was high, there were very few entrants, and so TSR Periodicals will not do another contest like it.

"Naming People, Places and Things In Petal Throne" is a rare article focused on Empire of the Petal Throne. It contains a name generator of a type that would become very common in RPGs in future years. This one is well done. Rolling a few d8s, I quickly conjured up the name "Nalljaandar." Nice.

There are about a dozen D&D related articles in the magazine, confirming Kask's comment that the new format would not see Fantasy RPGs neglected! "Keeping the Magic-User in His Place" is another one of those tedious pieces describing ways to nerf the practitioners of magic. In the early days of the hobby, people were already worried about what later became called the "quadratic wizard" problem.

Gygax spends his "Sorcerer's Scroll" column defending the D&D combat system against those who claim it is too unrealistic. In "Choir Practice at the First Church of Lawful Evil (Orthodox): The Ramifications of Alignment," Lawrence Schick (author of White Plume Mountain), attempts to integrate the D&D alignment system with a consistent religious framework. The results did not excite me.

"In Defense of Extraordinary Characters" is a strange little article that seeks to justify the power of high-level characters. "Chinese Dragons" expands on some notes found in the D&D supplement, Gods, Demi-Gods & Heroes, supplying us with some serviceable new monsters. "Another Look at Lycanthropy" provides variants on the lycanthropy rules found in Blackmoor, with the possibility of the character permanently changing into their monstrous form, among other things. A tiny article called "Disease" presents some tables that allow you to determine the lethality and symptoms of any disease randomly. Not bad, but it would have benefited from a disease name generator.

A not very funny article describes a new monster, the Narcisstics, easily recognizable to "any player of high school age." We find another attempt at humor in "The Infamous Miscellaneous Monster," with said monster given statistics such as "AC: Yes" and "Move: Usually."

Much better is the latest instalment of "Monty Haul," Jim Ward's satirical retelling of the TSR staff D&D campaign. The tale bounces along at a spirited pace, and there are lots of giggles along the way. The line, "When Tim pulled out his Rod of Seven Parts, we all knew the game was really do or die..." cracked me up, for some reason!

In "Psionics Revisited," the author aims to address two drawbacks he perceives in the psionic rules - "the scarcity of characters with psychic potential and the relatively random assignment of powers to different character classes." His proposed variant sees psionic powers effectively replicate the behavior of some spells. The system makes a bit more sense than the original psionic rules but leaves psionics feeling somewhat less like their own thing.

We've left the best til last (arguably). This issue sees the return of "Out on a Limb," the magazine's letter column, last spotted in issue #5. The reader letters are usually fun, and you can observe the entirety of social media prefigured there. Michael from Missouri complains about Gary Gygax's "character assassination" of Richard Berg in issue #22 and Raymond from South Carolina is unhappy about The Dragon merging with Little Wars.

Meanwhile, Douglas from Minnesota and Kevin from New York are both upset by a variant monster described way back in issue #17. The Crs'Tchen was described as "smiling, well-dressed" and "never without their Book of Eternal Existence." The editor, Tim Kask, scoffs at the notion that anyone might think TSR's games are anti-christian or anti-bible. It's a ridiculous suggestion, right? Just four months after this issue was published, James Dallas Egbert III went missing from his dorm room, and the so-called "Satanic Panic" began.

Next issue, we have lots of Gamma World, new Traveller rules, and social class in D&D!

This article was contributed by M.T. Black as part of EN World's Columnist (ENWC) program. M.T. Black is a game designer and DMs Guild Adept. Please follow him on Twitter @mtblack2567 and sign up to his mailing list. If you enjoy the daily news and articles from EN World, please consider contributing to our Patreon!

Hah, I’ve never heard of the Crs’Tchen monster before. Funny to see that sort of a nudge and wink. TSR knew that controversy was only bumping their sales up that much more.

Great review as always. It's facinating to see the history of the hobby.

Supporter
I'd been playing slightly over a year at the time that Dragon came out. I found the cover fascinating, it nailed an Atlantis feel or Elric's Melnibone. Even a little over a year into my ttrpg playing I had issues with DnD and ADnD 1st edition, Gygax could defend its combat mechanics but they felt stilted, restrictive and didn't excite me all that much.

We'd already roamed into playing more Runequest and some Traveller at the time of that Dragon, though we were still playing DnD to be sure. A couple years later(83"-ish) when the Paladium rpg came out we mostly moved to playing that. Though it was a hot mess, it just felt more active and fun to play. You still had character classes, levels but you were rolling to hit and over come the armor of your foe who might parry, dodge or block you. It just felt more fun.

Heh, this is a bit before my time. I was, what, 7 years old in 1979, so, not really into gaming quite yet. It wouldn't be until a couple of years later.

There where still occasional old issues of Dragon floating around in the early 80s. It took them a couple of years to migrate to the UK!

Nice to see the site back. This was a good issue. The "new" format didn't bother my crew too much; we played miniatures and board games as well as RPGs. RPGs (D&D and Traveller) did dominate our playing time though. Thanks for another (good) nostalgia fix, it's appreciated.