TSR Periodicals published The Dragon Issue 25 in May 1979. It is 48 pages long, with a cover price of $2.00. In this issue, we have lots of Gamma World, new vampire variations, and the return of the letters page! 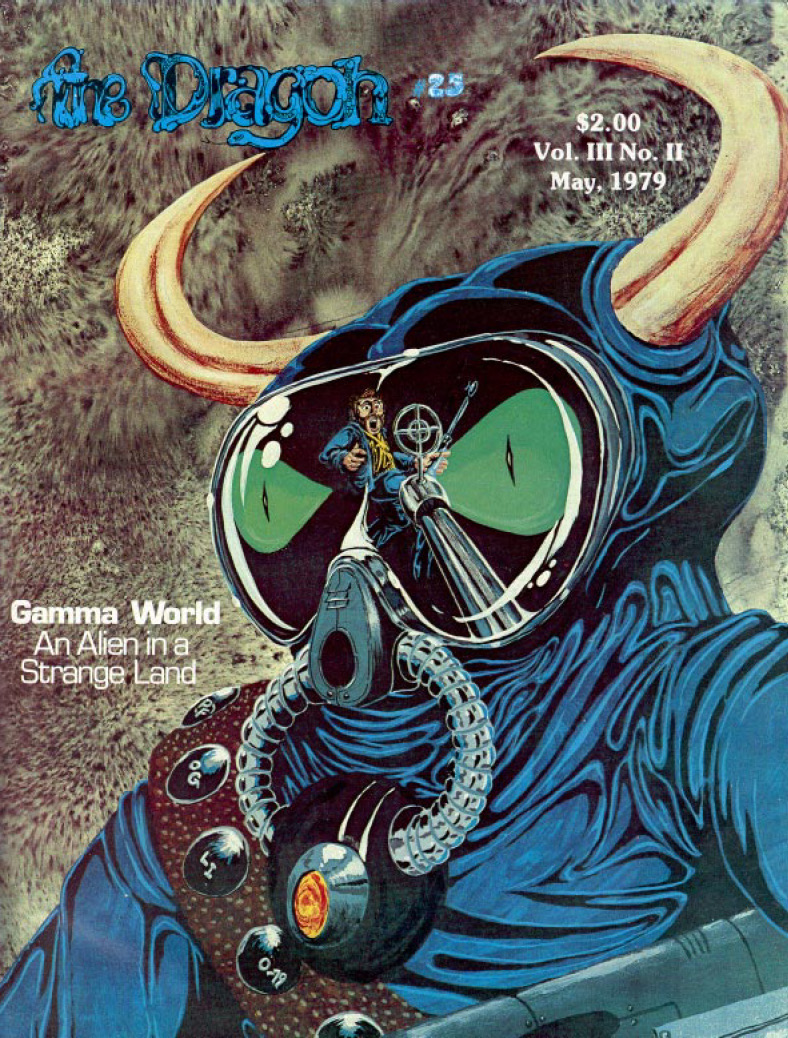 Editor Tim Kask informs readers that the letters column, called "Out on a Limb" is back. But he has a warning:

"Early on in our publishing life, we had a letters page that died for lack of participation. Two issues ago, we revived it. I use that word "revive" guardedly, because it might as well be still dead, judging from the response it has failed to generate. As I write this, I have serious doubts as to whether or not there will be a letters page in upcoming issues, as I have received none to speak of. This is the best and only chance the readers are going to get to make their thoughts known; let's hear from some of you."
Click to expand...


There are just three letters included in this issue. Mark Cummings complains about the recent "Lord of the Rings" animated film. Kenneth W. Burke complains about The Dragon's recent review of the Alpha Omega board game. Michael J. Sutton complains about a poorly run tournament he attended. Readers may wonder whether it was worth reviving "Out on a Limb" after all! 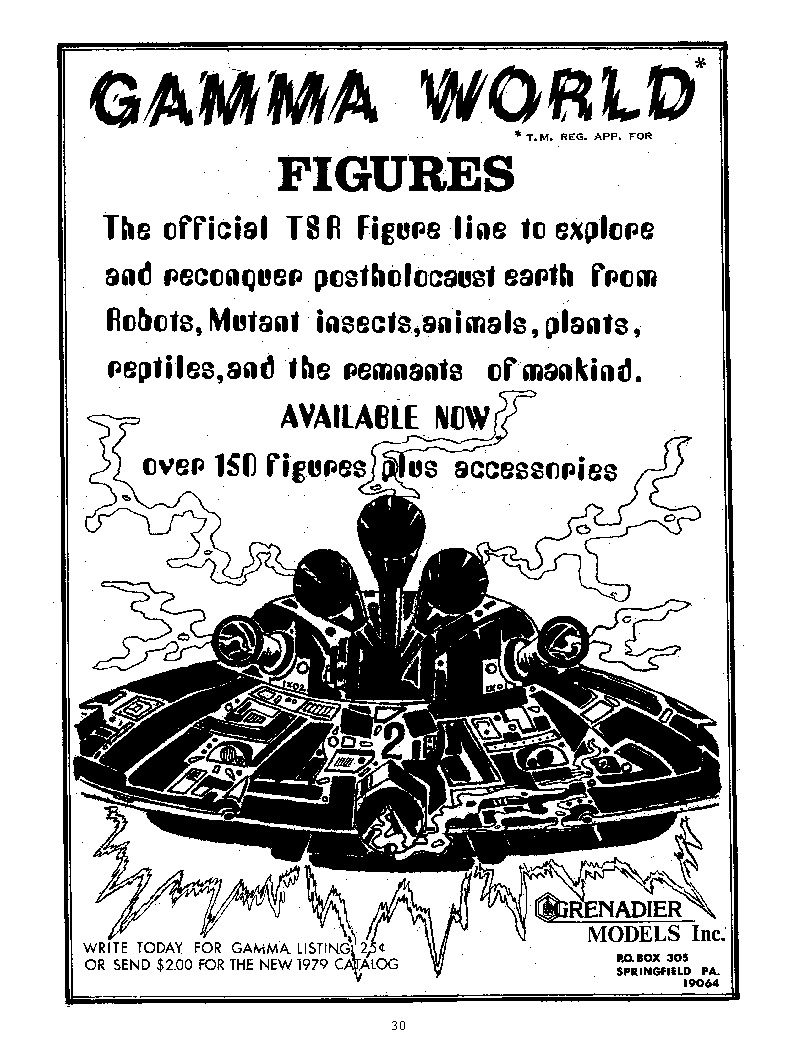 This issue focuses strongly on Gamma World, which was still only about a year old. In "A Part of Gamma World Revisited," Jim Ward details a bunch of new Gamma World factions, which were an essential part of the original game. In "Judging and You," Ward gives some general game mastering advice, such as figuring out what sort of game you are looking to run and being willing to improvise. Ward also gives us a short story set in the Gamma World universe, called "An Alien in a Strange Land."

Gary Jaquet, who would soon take over editing The Dragon, has two short Gamma World articles. In "Gamma World Artifact Use Chart," he offers an alternative to the standard Artifact Use Chart in the game. This chart is used to enable players to determine how to handle unknown technology. Jaquet's new chart has the great advantage of allowing the players to make decisions, but it is too abstract to be an excellent design. In "20th Century Primitive," Jaquet encourages referees to maintain a low level of technology in the early stages of the campaign to avoid it becoming "an exercise in collecting exotic weapons of destruction."

There is another science fiction short story, "The Tug of Machine" by Allen Evans. In it, a man faces off against a group of enemies using a bow and sword. Before the combat ends, he wakes up, and we learn the whole episode was an immersive computer simulation. This sort of virtual reality trope is widespread these days, but probably still packed a punch in 1979.

We also have a bunch of D&D articles. In the "Sorceror's Scroll," Gygax discusses the place of social class in D&D. He outlines various forms of government and describes the social hierarchy in a typical feudal system, and then basically says it is up to the DM to use the information effectively.

As an addendum to this article, Gygax mentions that he has finished the manuscript for the Dungeon Master's Guide. He gives special thanks to the following people, listed by the size of their contribution: Len Lakofka, Tom Holsinger, Gary Jaquet, Will Niebling, and Jim Ward. He also mentions that Lawrence Shick and Jean Wells authored two sections. One thing I've noticed, reading through the history of the hobby, is that Lakofka's name comes up a LOT.

In "To Select a Mythos," Bob Bledsaw (the founder of Judges Guild) gives some of his world design principles. In "Varieties of Vampires," we meet other vampire concepts from around the world. The color text is very evocative (for example, the asanbosam from Africa has books instead of feet), but there is very little to distinguish them mechanically from regular vampires. Had some innovative mechanics been included, this would have been a top-shelf article.

We have another one of those "Interview with a..." articles, this time with an iron golem. The joke is wearing a bit thin. An article called "Will the Real Orc Please Step Forward" discusses the different ways miniatures have represented orcs. This variation is present in the game art as well, with orc representation changing significantly over the years.

The final RPG article is "The Traveller Navy Wants to Join You." I assume it should have been "Wants You to Join," but perhaps there is a joke in there that I'm missing. It is a bunch of variant tables for the naval career option. The Traveller community seemed to love these sorts of tables, and these look as well done as any.

The remaining articles are all military background material, of the sort that Little Wars used to publish. "The Armada's Disasters" discusses the Spanish Armada. The third part of the "Armies of the Renaissance" series examines mercenary companies in medieval Italy. The "War of Flowers" discusses the military structure and tactics of the Aztec states, and "Xochiyaoyotl" is a little wargame modeling that information - good stuff! Finally, "Arms and Armor of the Conquistadores" explains how the Spanish were able to conquer the Aztec empire.

Another issue full of solid content, though there were no real "stand out" articles. Still, the magazine is becoming increasingly professional, and this will only continue. Next issue, we have Giants in the Earth, D&D vs. AD&D, and the Bazaar of the Bizarre!

Supporter
Len did a lot of good stuff in those early years. I tended to snag anything that had his name on it at the time.

Thank you as always for these articles. I look forward to them quite a bit.

There are just three letters included in this issue. Mark Cummings complains about the recent "Lord of the Rings" animated film. Kenneth W. Burke complains about The Dragon's recent review of the Alpha Omega board game. Michael J. Sutton complains about a poorly run tournament he attended. Readers may wonder whether it was worth reviving "Out on a Limb" after all!
Click to expand...


Proving that we've always had "forums" before the internet. Makes me wonder if the Imperial Roman Senate was just more of the same, but people got to vote for the best (worst?) complaint.

I remember owning this issue when I purchased a large back stock of TD from a friend of mine for $20!

I liked the variant artifact use chart for Gamma World. The advice on keeping tech scarce in the game was, as I recall, a bit problematic. There was no experience / character advancement in the game. The tech / "treasure" you found was the only "advancement" there was. Otoh I can remember a variety of home brewed experience systems... that's been a while

As always, thanks for the trip down memory lane MT!