TSR Periodicals published The Dragon Issue 27 in July 1979. It is 52 pages long, with a cover price of $2.00. In this issue, The Dragon celebrates a milestone, we explore lots of wargame content, and the Bazaar of the Bizarre introduces us to the bag of wind! 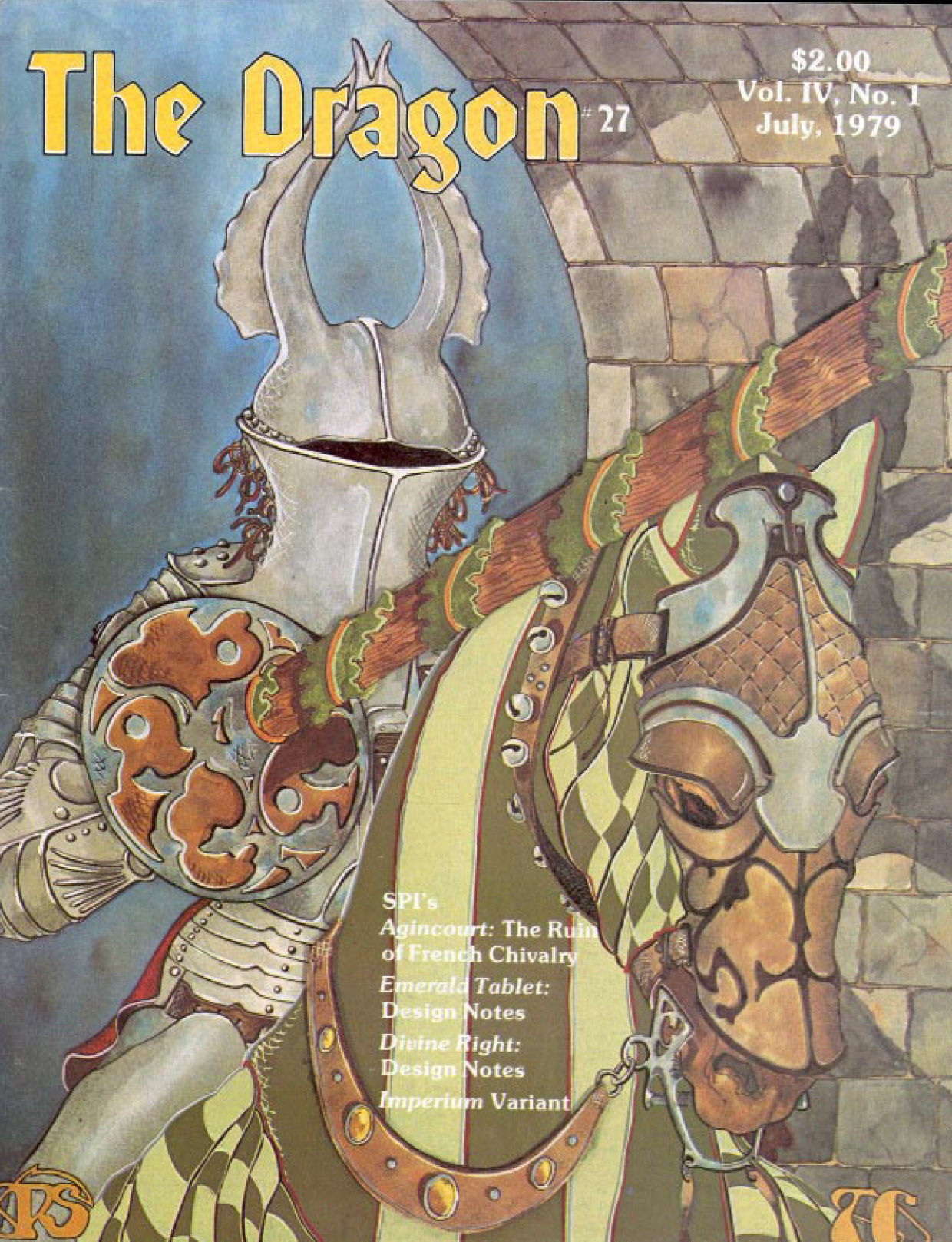 "I still find myself wondering if all of this is real; it seems too dream-like to have so much fun at what you do for a living, and certainly shoots the old Protestant work-ethic down in flames."
Click to expand...

This comment is intriguing, given Kask would resign from TSR within twelve months. As he reflects on what The Dragon has achieved, he nominates things such as becoming the largest magazine of its type, expanding into foreign markets, and publishing quality fiction. Surprisingly, he adds this comment:

"Our landmark achievement remains in having published the two Snit games. I still find it hard to believe that SNIT'S REVENGE is now a boxed game, and selling very well for TSR Hobbies, Inc."
Click to expand...

To this, he wryly adds, "Too bad we couldn't have published it ourselves." It's important to remember that TSR Hobbies and TSR Periodicals were two separate entities under a parent company. This comment is one of the few hints I've seen of any friction between the entities. It might also suggest that Kask would prefer to have been publishing games rather than magazines.

“Out on a Limb” is back. Ray Rahman offers a lengthy criticism of the recent Lord of the Ring’s review, while Mark Hermansen complains about the plethora of material now required to play D&D. This was in 1979!

There are five feature articles this month. "From the Sorcerer's Scroll" has a guest author, Bob Bledsaw, the founder of Judge's Guild. Bledslaw subtitled his column "What Judges Guild has done for Dungeons and Dragons." In it, he discusses some of the supplements the company has produced under license from TSR, such as the excellent Wilderlands of High Fantasy. Judges Guild were true innovators, and the company continues to publish material today, under the leadership of Bledslaw's son.

"Giants in the Earth" gives us statistics for Fafhrd and the Gray Mouser, John Carter of Mars, as well as Durathror (a dwarf prince from The Weirdstone of Brisingamen). "Dragon's Bestiary" presents the Horast, a six-legged, whip-tailed monstrosity that does not appear in any official books. "Bazaar of the Bizarre" offers a new magic item, the bag of wind, by Gary Gygax. It is a fun item with lots of options and effects. The final feature is "A Quick Look at Dwarves." Aimed at miniatures wargamers, it describes the organization of dwarven armies and draws heavily on Tolkien.

The issue includes two variants for D&D. "Elementals and the Philosophers Stone" expands the four elements to twelve, including things such as heat, moisture, and (strangely) pleasure. The ideas are ok but undeveloped. This area was treated much more effectively later on with the creation of the para-elemental planes in Monster Manual II. "The Mythos of Africa in Dungeons & Dragons" gives game statistics for gods such as Mulungu, Shango, and Ala. The statistics in these articles always seemed uninspiring to me.

There are two variants for Traveller. "Tesseracts: A Traveller Artifact" presents these strange hypercubes as an optional extra for starships, while "Star System Generation" provides a random system for generating star types, solar orbits, and so on. "Go Boldly Where No Man Has Gone Before" provides rules for expanding the Imperium boardgame.

There are three game reviews, none of them RPG-related. Agincourt by SPI is "incredibly playable" and "incredibly complex." The English Civil War by Philmar is "a great game in a lousy box," while MiG Killers by Gamescience is the "best single air warfare game available."

There are "Designer's Notes" for no less than three games included in this issue. James Dunnigen discusses how he combined realism with playability in Agincourt. Glenn and Kenneth Rahman describe how Divine Right came to be, while Jay Facciolo explains what makes Emerald Tablet unique.

Rounding out the Agincourt theme, "The Political and Military Effects of Agincourt on the Hundred Years War" is a long historical article that gives you exactly what it promises on the tin.

It's a substantial issue with a lot of wargame content. The RPG articles are generally useful, though none of them approaches the level of a classic. Tim Kask's editorial was probably the highlight for me!

The next issue is a good one, and includes the Politics of Hell, the return of Monty Haul, and Awful Green Things from Outer Space!

I feel like these magazines were at their best when they had mixed content. Nexus from TFG started out talking about RPG Adventure games as well as TFG's house games (Star Fleet Battles and such). That buffet of content made the individual zine more useful. OR it could just be me.

SMHWorlds said:
I feel like these magazines were at their best when they had mixed content. Nexus from TFG started out talking about RPG Adventure games as well as TFG's house games (Star Fleet Battles and such). That buffet of content made the individual zine more useful. OR it could just be me.
Click to expand...


No I'm the same. I loved Dragon, and White Dwarf, before they became house mags more. Even articles for games I didn't play were interesting as I got a glimpse into different systems.

"Giants in the Earth" gives us statistics for Fafhrd and the Gray Mouser, John Carter of Mars, as well as Durathror (a dwarf prince from The Weirdstone of Brisingamen). "
Click to expand...


If I had known about D&D back then, I would have loved this issue. I always said a few tweaked races and renaming/reskinning things would easily turn bog standard D&D into a JCoM game. Years later, I proved it to myself with a Castles and Crusades one-shot. And of course some DIY game designers have done it as actual products.

SMHWorlds said:
I feel like these magazines were at their best when they had mixed content. Nexus from TFG started out talking about RPG Adventure games as well as TFG's house games (Star Fleet Battles and such). That buffet of content made the individual zine more useful. OR it could just be me.
Click to expand...


Its not just you I agree. I loved both the Dragon and White Dwarf when they covered other games. While I liked some mags which centered on just one game (i.e. The Journal of the Traveller's Aid Society) the inclusion of a wide variety of articles gave me exposure to other systems and also ideas which could be adopted for my favorite systems.

My feeling is that the boardgame and wargame content really diminished after Kask left the magazine (coming up in a few issues). We'll see if that theory holds true. There's part of me that wishes that Dragon+ were a little more expansive than it currently is.

White Dwarf used to be brilliant when it covered all PnP RPGs.