TSR Periodicals published The Dragon Issue 27 in August 1979. It is 59 pages long, with a cover price of $2.00. In this issue, we have the Politics of Hell, the return of Monty Haul, and Awful Green Things from Outer Space! 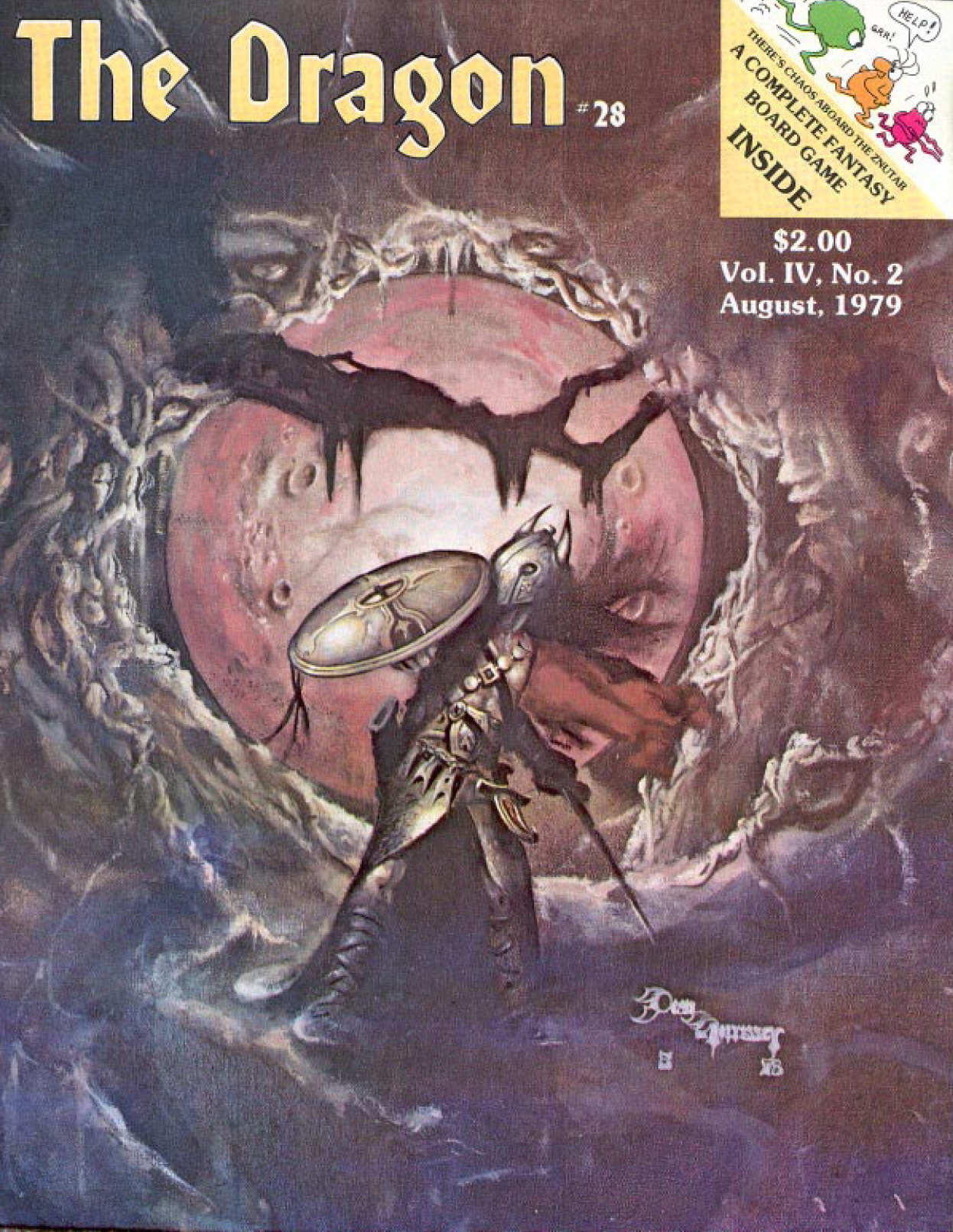 In a short editorial, Tim Kask encourages readers to help dispel the misconceptions that have accrued around gamers. He says:

"To many people, the appelation 'wargamer' conjures up visions of a budding group of warmongers, intent on world destruction, or some sort of blood and violence freak that gets his jollies on carnage and mayhem. Mention fantasy, and many think that we are a bunch of hopeless Walter Mitty types, disassociated from the real world."
Click to expand...

He may have been discouraged to know that it would take nearly 40 years for the stigma around this sort of gaming to start to evaporate.

"Dragon's Bestiary" presents us with the Slinger by Jake Jaquet, "a reptilian creature somewhat like an iguana" that can throw spines from its tail. It did not make it to any official books. TSR paid $20 for monsters, which then became TSR's intellectual property. It will be interesting to see how many reader-submitted monsters were ultimately re-printed in the hardcovers.

"Giants in the Earth" gives us statistics for Eric John Stark from "People of the Talisman" by Leigh Brackett, and Welleran from "The Sword of Welleran" by Lord Dunsany. "Bazaar of the Bizarre" shares a collection of minor magic items from Len Lakofka, including Leomund's Plate & Cup. In "Sorcerer's Scroll," Gygax discusses the difference between lawful evil and chaotic evil.

There are a bunch of minor feature articles. In "A Short Course in D&D," a teacher describes how he instructs students in the game. In "Six Guns & Sorcery," TSR staff member Allen Hammack explains how to do Boot Hill / AD&D crossovers, while "Fantasysmith's Notebook" has tips on miniature collecting.

There are several wargame-related features. "Simulating the Cavalry Plain" is a scenario for System Seven Napoleonics, while "Elvish Tactics" discusses the formation and deployment of Elvish armies, and seems aimed at Lord of the Rings-style miniature wargames. There are two historical military articles, one concerning "The Cavalry Plain at Austerlitz" and the other describing the "Armies of the Renaissance." This sort of material disappeared from the magazine altogether once Tim Kask left.

The most notable feature is "The Politics of Hell" by Alexander von Thorn, who later wrote for GURPS. It is a bizarre but compelling essay that weaves medieval and puritan conceptions of hell into the D&D multiverse. The article was influential in its own right and was later included in The Best of Dragon. Ed Greenwood made good use of some of its ideas a few years later when he wrote his authoritative articles on the Nine Hells.

There is a single rule variant in this issue. "Level Progression for Players and Dungeon Masters" suggests awarding experience points to players and DMs depending on how much they play. The purpose of these awards would be to allow people to gauge relative experience at conventions. It did not catch on.

There are two reviews. Divine Right by TSR Hobbies is "an outstanding, fascinating, challenging, and interesting game, well worth anyone's attention." Sorcerer by SPI is "enjoyable," but "has several features that only serve to overcomplicate the game."

Jim Ward returns with some more Monty Haul madness. For D&D history buffs, it's fun to figure out who was attending these games. Ward writes:

"We were on a winter level tonight and were far from pleased. It was Friday, one of our usual D&D nights and we were going down into a refrigerated level of Monty's that we had found weeks before. We had all made fur coats for our figures and most of the group was going down. Robert, Jake, and Dave (I) (Tractics boys through and through) were going down as their 20th level fighters; Brian (a tractics lover too, but a fanatic on Western Gunfight) was going as his 21st level thief/fighter/cleric dwarf; Ernie, Dave (II), and I were going down as wizards of the 18th level (just little guys); Freddie was his stupid high level sword carried by a flesh golem from Jake's golem squadron; Tom and Tim went as druids (probably because they liked all types of herbs)."
Click to expand...

I'm guessing this group included Rob Kuntz, Jake Jaquet, Brian Blume, Ernie Gygax, Dave Megarry, Tom Wham, and Tim Kask. I'm not sure who Freddie or the second Dave is, but someone in the comments will know. Nor am I sure how much these columns describe actual games, and how much are amalgamations, expansions, and downright inventions! It's all good fun, nonetheless.

There is an extended interview with Gary Gygax about the recent Dungeon Master's Guide, with a lot of time spent discussing how and why original D&D players should switch over to Advanced D&D. The irony (as Skip Williams recently noted) is that experienced players stuck with original D&D (and later, BECMI D&D) while beginning players tended to favour Advanced D&D!

I've saved the best until last. This already packed issue includes a full board game—The Awful Green Things from Outer Space by Tom Wham. In this whimsical little board game, crew members battle aliens for control of a spaceship. It was so popular that TSR Hobbies released a boxed version the following year, before Steve Jackson Games picked up the rights and published multiple editions. Black Gate magazine was undoubtedly correct to call it "one of the great mini-games of all time."

Next issue, we learn all about inns and taverns, Wormy returns, and a future legend joins The Dragon!

My guess is the two Dave's are likely Tramp and Sutherland- both Staff artists at the time, Tramp was staying above the Dungeon Hobby Shop in the old TSR building/House around this time according to Tim.

"Experience points for GMs" has sort of shown up as the star system for GMs in Pathfinder's organized play. (I don't know if other OP campaigns do similar things.)