Dragon Publishing released Dragon issue 58 in February 1982. It is 88 pages long and has a cover price of $3.00. In this issue, we have the Spellminders playing aid, a special section on dwarves, and many new cleric spells! 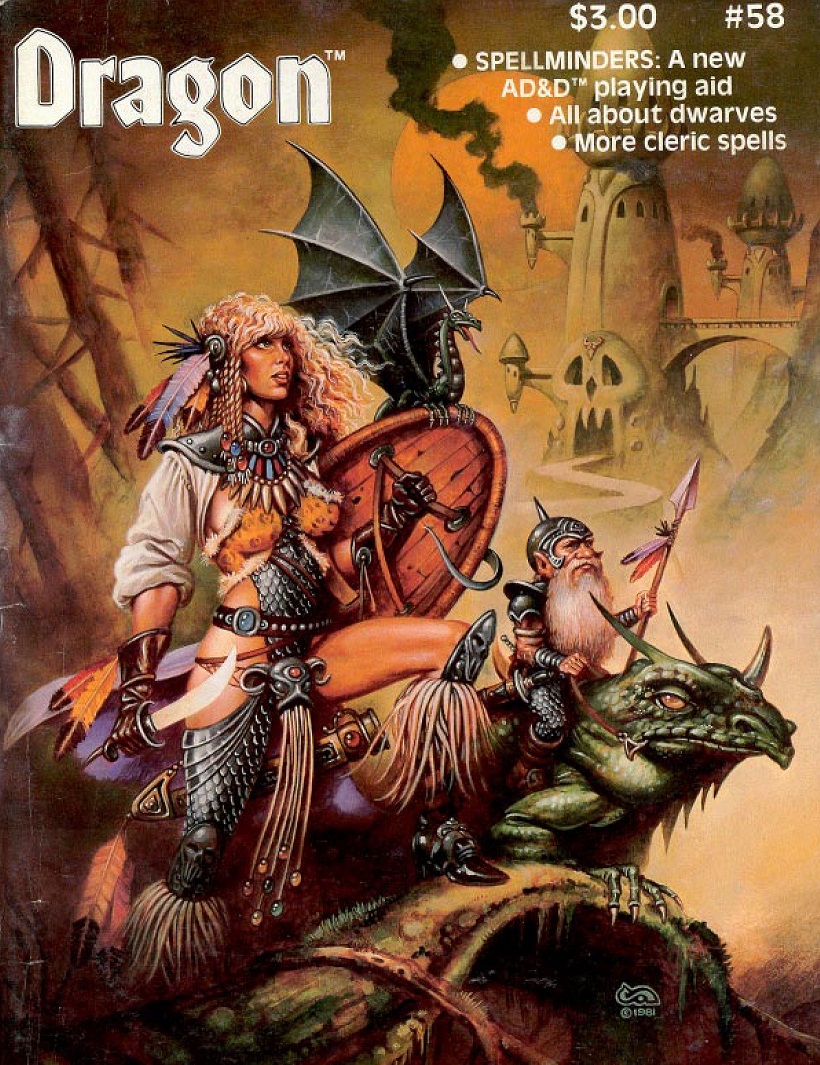 This month's special attraction is Spellminders, a playing aid developed by Bill Fawcett and Lance Davenport. It comprises a sheet of small cardboard chits, each with the core details of a spell printed on it. These details include spell name, level, casting time, range, and saving throw effect. The tool aims to help spellcasters track their spell usage and save time looking up details in the Player's Handbook. However, unsurprisingly, it did not catch on.

We have an impressive collection of other features. "The Blood of Medusa" by Michael Parkinson gives D&D statistics for the offspring of the famous snake-haired monster. "Four Myths from Greece" by Roger Moore and Katherine Kerr has stats for Atalanta, Daedalus, the Sybil of Cumae, and Chiron.

There is a mini-section by Roger Moore with four feature articles devoted to dwarves. "The dwarven point of view" gives a general overview of these stocky demi-humans. "Bazaar of the Bizarre" describes two magic items, the High Anvil of the Dwarves and the Helm of Subterranean Sagacity. Sage Advice answers questions such as, "Could an elf or dwarf who has reached the highest level possible use an Ioun Stone to gain further levels?" Finally, "The gods of the dwarves" introduces us to deities such as Vergadain, Dumathoin, and Abbathor.

"In the Bag" is a short story by J. Eric Holmes, creator of the D&D Basic Set. This was the third story he published in Dragon about Boinger the Halfling, who was based on his son's first D&D character. It was also Holmes' final publication for TSR as Dragon rejected the follow-up fiction.

There are several articles on the bow. "Aiming for realism in archery" by Robert Barrow, "Bowmanship made more meaningful" by Carl Parlagreco, and "A long bow isn't always a strong bow" by Robert Bowling all offer crunchy archery rules for D&D. They stand in a long tradition of Dragon articles aimed at turning the game into a better combat simulation.

David Nalle's "Swords: Slicing into a sharp topic" is a potted history of D&D's most popular weapon. "Being a bad knight" by Glenn Rahman is a rules variant for the Knights of Camelot game. Finally, "Anything but human" by John Mattson offers up alien rules for Traveller.

On to the regular offerings! In "Leomund's Tiny Hut," Len Lakofka brings us twenty-six new cleric spells. These are especially noteworthy because Gary Gygax introduces the column and informs us this is "official" material.

"Dragon's Bestiary" has three new monsters. The sull by Ed Greenwood resembles a floating mushroom cap; the beguiler, also by Ed, is a mouselike creature; and Magenta's cat by Roger Moore is a psionic feline.

"Dragon's Augury" has four game reviews by Bill Fawcett and Tony Watson. Griffin Mountain is a Runequest supplement from Chaosium and boasts a "truly impressive scope." Star Patrol by Gamescience is "worth considering." Trillion Credit Squadron "carries on the high standards GDW set with the Traveller line." Finally, Beyond and Vanguard Reaches by Paranoia Press are "nicely done and well thought out."

"Off the Shelf" returns with seven book reviews by Chris Henderson. The Pride of Chanur by C.J. Cherryh is "a great book to start the new year with," and The Death of a Legend is one of Robert Adams' "best works." By contrast, Guardsman of Gor by John Norman is "designed for Gor fans... it drags on, battle after battle."

There are several anthologies. The Dark Between the Stars is "one of the best collections" of Poul Anderson stories, while Whispers III by Stuart David Schiff is "very important." Fantasy Annual IV by Terry Carr is a "winner." Finally, Scarlet Dream by C. L. Moore is "a dream come true."

And that's a wrap! A solid issue with "The Blood of Medusa" and "Leomund's Tiny Hut" being the highlights. Next issue, we have a Traveller adventure, cantrips for D&D, and a special feature on halflings!
Click to expand...

Thank you once again for this; always a buzz when I see one of your Dragon Reflections posts.
I remember getting good use from the Medusa’s offspring as well as designing an adventure around the evil dwarf god, Abbathor. The new cleric spells were great too.

This is a great issue. I read this so many times.

I've not read this one, but a whole section on dwarves penned by Roger E. Moore makes this one next on my to-buy list.

This issue had staying power: a character in my game right now is a Cleric to Dumathoin.

I also like to use gnomes to protect my shins.

Need to cast permanent Silence on 'em though or their screeching will drive you nuts within the hour...

Something I've never noticed.... The look on the dragon's face. He looks like he's almost rolling his eyes, with that mouth.

Did any of the cleric's spells make it to later editions?

mach1.9pants said:
Did any of the cleric's spells make it to later editions?
Click to expand...

Pretty much all of them were in 2nd edition from day one, and a few made it through to 3rd (notably negative plane protection.) The big introduction here, though, was ceremony, which was added back into 5th edition in Xanathar's.

Love the article, but now I want to know the answer to if a elf/dwarf of max level can use an Ioun stone to get another level in.

Silver Griffin said:
Love the article, but now I want to know the answer to if a elf/dwarf of max level can use an Ioun stone to get another level in.
Click to expand...

Sage answers "No", followed by some rationalization about how Ioun stones that increase ability scores don't do so if that would raise them above 18.

One of the more iconic covers for me during the heyday of my middle school/high school Dragon collection. The next issue is my favorite issue of all time with Exonidas Spaceport for Traveller.

We are getting to the dragon magazines that were the ones that poured over and know fairly well. Been enjoying this immensely.