Dragon Publishing released Dragon issue 59 in March 1982. It is 84 pages long and has a cover price of $3.00. In this issue, we have Doom Knights, monster making, and dozens of new poisons! 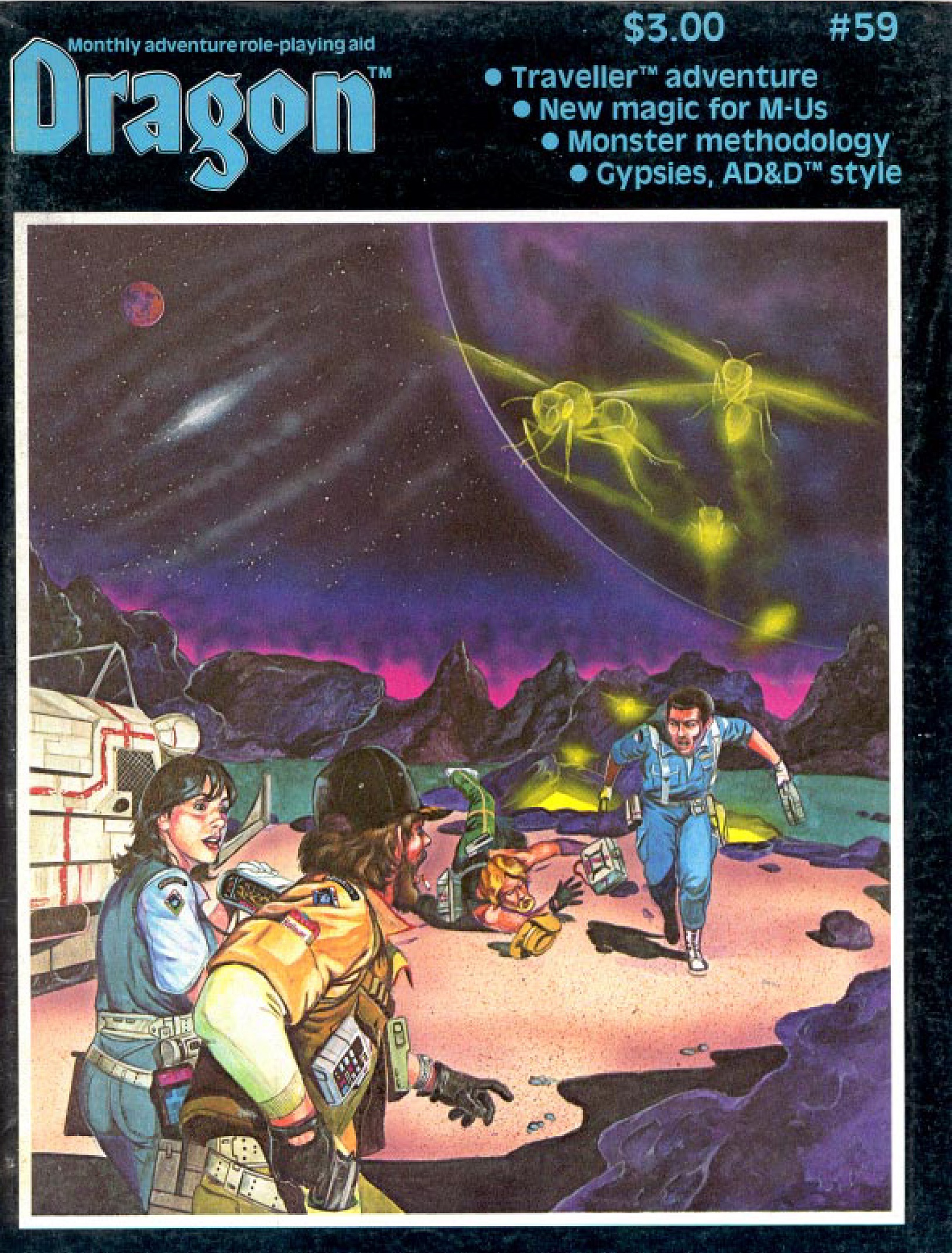 This month's special attraction is "Exondias Spaceport," a Traveller adventure by Jeff Swycaffer. It is 16-pages long and describes a mini-sandbox setting that includes a small planet and its spaceport. The feature packs a lot of detail and is enhanced by several excellent illustrations. Swycaffer was a regular contributor to Dragon at this time, though he is better known now for his "Concordat" series of science fiction novels.

Keeping with the sci-fi theme, "Skitterbugging" is a short story about astro-geophysicists and their encounter with a new life form. In a nice postscript, designer Steve Winter gives Traveller stats for the crew, equipment, and alien species.

There are a pair of features on halflings, both by Roger E. Moore. "The Halfling Point of View" describes the culture of the game's most diminutive race, while "The gods of the halflings" introduces us to deities such as Arvoreen, Brandobaris, and Cyrrollalee.

Rob Kuntz makes a rare appearance in the pages of Dragon with "The Great Kingdom and the Knights of Doom." It provides some recent Greyhawk news and a description of the titular Knights, created by Ivid the Undying for nefarious pursuits. The editor intended this to be a regular column, but it lasted only a few issues.

In "Poisons: The toxins of Cerilon," Larry DiTillio describes various poisons and their effects. If you are familiar with DiTillio's work, you will not be surprised to hear that this is high-quality content. Speaking of quality, "Make monsters, not monstrosities" by Lewis Pulsipher offers a valuable set of guidelines for creating credible D&D monsters. I can't recall another article of this nature in Dragon, and it is very welcome.

On to the regular offerings! In "From the Sorcerer's Scroll," Gary Gygax introduces us to cantrips, which are the minor spells "learned and used by apprentices during their long, rigorous, and tedious training for the craft of magic-use." They are primarily domestic in focus, with names such as Clean, Dust, Stitch, and Sweeten. But imaginative players may have found a use for them in an adventuring context.

"Dragon's Bestiary" has three new monsters. The bleeder by Ed Greenwood is a kind of bloodsucking beholder; the stymphalian birds by Michael Parkinson are carnivorous storks; and the spriggan by Roger Moore is a tiny, grotesque humanoid. Of these, I'm most likely to use the stymphalian birds.

"Dragon's Augury" has just two game reviews this month, both by Tony Watson. Starfire III: Empires by Task Force Games "has a few problems" but is still "impressive," while Demonlord by Dwarf Star is "a real bargain."

Chris Henderson returns with five book reviews in "Off the Shelf." We have two anthologies: the Best of Randall Garrett is "worth buying," while In Iron Years by Gordon R. Dickson "is not a great collection, but it is a good one."

Fuzzy Bones by William Tuning is "a totally enjoyable novel." The Essential Guide to Home Computers by Frank Herbert (yes, that Frank Herbert!) is "a simple book" but "necessary." Finally, The Art of Leo & Diane Dillon "is in all respects what an art book should be."

And that's a wrap! Some good content this month, with the highlight being DiTillio's article on poison. Next month, we have D&D firearms, a feature on elves, and the April Fool's mini-magazine!
Last edited by a moderator: Aug 9, 2022
Click to expand...

The first mention of cantrips!

M.T. Black said:
and the spriggan by Roger Moore is a tiny, grotesque humanoid.
Click to expand...

Wasn't the spriggan a dwarf that was also a giant? I remember I used one once and terrified my players. Great fun.

I always have a soft spot in my heart for this issue for some reason. I really loved the Halfling articles. Particularly the info on the halfling gods. I was just a kid when this issue first came out and the thought of halflings having their own mythology was completely alien to me at the time. I'd never thought of that but it made perfect sense of course. I quickly snatched up the other issues to read about the other "demi-humans" and "humanoids" as well and was equally intrigued.

Another great issue, that saw use in my games. This is, imo, the peak of the magazine (around these issues).


And precluded my idea for "Can Trips: Heroic Adventuring in the World of Tin and Aluminium". Darn you, Gygax!!

And my idea for "Can't Rip: Ripstop Fabrics in High Fantasy".

I know there are a few gaming mags out there that support more than one game system, but I wish there were more.

Also, I think that dude in blue totally bowled over his hat wearing co-worker. Not cool, dude.

And my idea for "Canned Trips: An Entire Module in a Can (comes with dice and miniatures)". It would have been ahead of its time!

Von Ether said:
I know there are a few gaming mags out there that support more than one game system, but I wish there were more.

Also, I think that dude in blue totally bowled over his hat wearing co-worker. Not cool, dude.

I don't have to outrun the monster, just outrun you... <trip>

I still have a xerox copy I made of those poisons and still use it. All of the old Dragons are such a wealth of ideas and content.

I still have this issue. It was just so good, especially since I was really into Traveller at the time. The cantrips were a good example of many spells back then - all about creative uses, like making someone sneeze at an inopportune time.

Definitely the Golden Age of Dragon.

This hasn't aged well, with the G word usage.. that was outdated even in 1982.

I'm sad we never got a full Cerilon treatment. DiTillio did two articles about it, the poisons one here, and "The Glyphs of Cerilon" in Dragon #50. Apparently, while it was originally his D&D home campaign, he later made it its own percentile system. I really wanted to see it!

RealAlHazred said:
I'm sad we never got a full Cerilon treatment. DiTillio did two articles about it, the poisons one here, and "The Glyphs of Cerilon" in Dragon #50. Apparently, while it was originally his D&D home campaign, he later made it its own percentile system. I really wanted to see it!
Click to expand...