Earth Sector is now available in PDF at Drive-thru RPG!

Earth Sector is an extension of Independence Games' (formerly Gypsy Knights Games) Clement Sector setting. Earth Sector is its own setting, united by the past background before the Conduit Collapse in 2331, and then branching off in a new direction. This is the core setting book for this new setting within the overall Clement Sector universe.

Earth Sector is not a standalone game. You will need the rules provided in Clement Sector: The Rules, Cepheus Engine, or any 2d6 science fiction rules in order to play. It is highly recommended, but not necessary, that you are also familiar with the Clement Sector setting and its background.

Whereas Clement Sector is a collection of independent worlds, Earth Sector is ruled by the nation-states of Earth. Many of the nations of Earth hold multiple star systems in their grasp across the sector though, in some places, that grasp is slipping.

Using the relationship matrix developed in Balancing Act: Interstellar Relations in Clement Sector, Earth Sector contains detailed reports on which nation is doing well, how much they are raking in from their colonies, and upon which nation they may yet declare war.

Everything is here to get your game in Earth Sector started!

It's a new adventure! Join us! 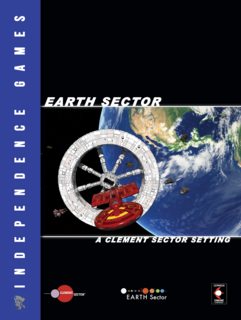