One of the great joys of working at TSR was being part of the group that played in Gary Gygax's weekly game. Over the years we had been the test subjects for many of the now classic Gygax adventures. 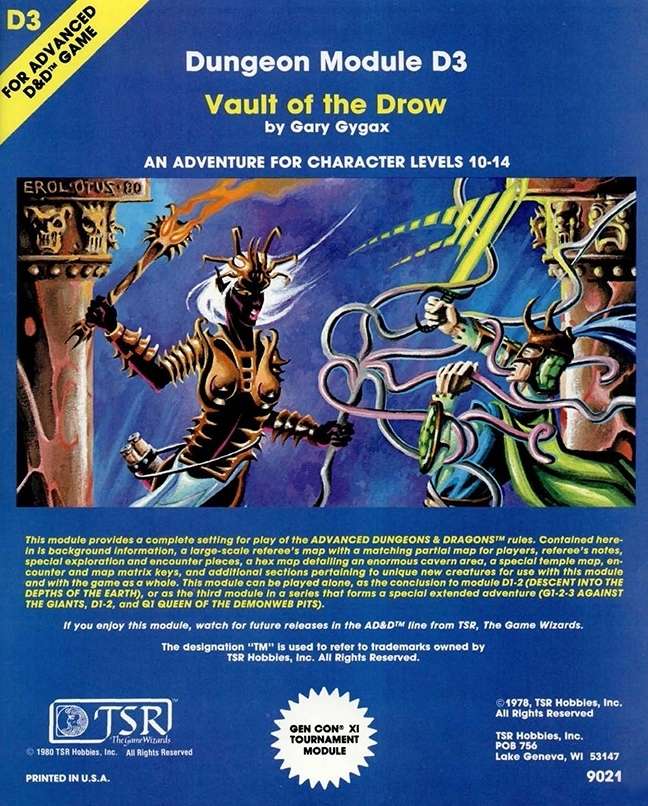 Take TOMB OF HORRORS for example. We playtested that adventure with our highest level characters. I can remember that Rob Kuntz took a band of orcs into that adventure. The orcs didn't come out. When I was questing there I used a flying carpet in the tunnels. In this way I managed to avoid the deadly pits. Unfortunately, for me I also didn't find the secret door in the pit and missed out on the best treasure. At least I and my pals didn't die in that tomb. By the way, there are tons of whiners who complain that the module is too difficult. I have to say if a character is dumb enough to jump in the giant mouth of a demon image on the wall, they get what they deserve.

Note from Morrus -- this is the sixth of Jim Ward's series of articles here on EN World! Upcoming articles include SSI and AD&D Computer Games, and The Origin of Monty Haul! Please let us know in the comments about topics you'd like to hear, and don't forget to check out Jonathan Tweet's new column!

We had been using low-level characters to play out THE VAULT OF THE DROW. Many of the battles barely had us survive and the adventure was great fun to play. However, it was here that we discovered that all of the great wondrous Drow armor, Drow swords, and Drow magic items went bad when used in direct sunlight.

Let me briefly describe Gary's final home set up. All the gamers sat around a long dinner table. We had very comfortable leather chairs. Gary would sit at the head of the table. There were usually 5 to seven of us. I tried hard to attend every week. I learned all about game design from watching Gary work. He was a master at the twist in the story, at foreshadowing a big event, and at generating characters that stuck in your mind years later. I wanted to do all of that, and only time will tell if I succeeded. Gary was an excellent host. We usually brought something for everyone to snack on. I was a provider of large bags of M&Ms. We would play for three or four hours. At the end of the evening there was always a fun cliff hanger designed to bring us back the next week.

The week of this story we were using our low-level characters. I had a half-elf thief/magic-user that I was very proud of. Ren 'o the Blade had high stat scores. He had risen to 5/6 in experience levels. He had an impressive magical dagger, a fully charged wand of fireballs and a half-charged wand of paralyzing. Other players brought their dwarves and humans. We were a solid group that had played together before. This time was strange in that Gary insisted that a powerful NPC dwarf come along on the adventure. He had never brought along an NPC before. We didn't have a problem with that when we found out the dwarf had a large magic carpet, a +3 shield, and a dwarven throwing hammer. We started into the Drow area through part that we had cleared before.


We discovered a highly magical area with some type of dais. The Drow and Drider guards were quickly dealt with. Gary described the portal in wonderful detail. None of us were going to make any mistake in dealing with this thing. We started testing it using the same tests that we used for the demon mouth in TOMB OF HORRORS. We tied a rock to a rope and threw it in the hole. We could easily pull the rope back. We stuck a staff with a bit of raw meat on the end in the hole and again easily pulled it back. A small cage with a living plant and a mouse went in and came out healthy and fine. We had a wizard with a teleport spell. He memorized our area and we tied a rope to his middle and he walked through the portal. We easily pulled him back and he described a cool metal chamber with a metal door in the distance. We were filled with wonder and just had to check it out ourselves. Here is where we made the bonehead mistake.

We all jumped into the portal; came out on the other side; and began exploring.

Gary got up from his DM chair and asked me if I had my Metamorphosis Alpha starship Warden material. I said I did and he urged me to go and get it. I thought this was a strange request, but I went and got it. When I came back Gary was sitting in my chair with a character sheet in his hand. He told me to sit in his DM chair. I felt very uncomfortable sitting in Gary's chair. For years that chair represented the all-powerful DM. At first I was very unsure of DMing this group.

Gary explained to all of us that we had just been transported to the starship Warden. The portal we went threw had winked out behind us (bonehead moment for us). The group was now on the deadly Warden. My beloved fantasy character Ren 'o the Blade was in deadly danger and I was the one explaining the danger.

For many game weeks, the group explored the Warden. Gary and I talked about the effects of magic and mutational powers. We decided magic did full unsaved damage so my half-elf's fireball wand did 36 points of fire damage. Conversely, mutant control attacks always worked on the fantasy characters.

I was unhinged in the following weeks as I threw military robots, red androids, and really nasty mutant plants at the group. Rolling to see which character the Warden menaces attacked was unusually hard for me, especially when they attacked my half-elf. More discussions occurred on clerics getting their spells back. I selfishly wanted it so my character could be healed of damage.

It is now 43 years later. That brave band of fantasy characters lives in a forest on level seven of the Warden. I'm hoping Steve Chenault of Troll Lords lets me write a stretch goal C&C adventure where they go to save Ren the Prince of an Elvin Nation. Only time will tell, wish him luck.
Click to expand...

Great story! Thanks for sharing.


If so, says a lot about Gary's foresight on the possibility that the group would make the one way trip through the portal. Plus he guessed correctly on the Warden material being available at that game session.

Such a good story. Thanks for sharing this. It was a great read!

I had a half-elf thief/magic-user that I was very proud of. Ren 'o the Blade had high stat scores. He had risen to 5/6 in experience levels. He had an impressive magical dagger, a fully charged wand of fireballs and a half-charged wand of paralyzing.
Click to expand...


Well now I have to ask about the connection between that character and the fellow of the same name from the Forgotten Realms novel Pool of Radiance, which I believe you co-authored.

I seem to recall Ren O' the Blade also showing up in Greyhawk Adventures. Which would also make sense.

A great tale to hear, definitely. I remember back in the 1e days how great drow-forged gear was, and how ridiculously careful my players were to keep their spoils from sunlight. They never lasted though. I think one PC managed to hold onto a longsword, but everything else eventually lost its magic.


Alzrius said:
Well now I have to ask about the connection between that character and the fellow of the same name from the Forgotten Realms novel Pool of Radiance, which I believe you co-authored.
Click to expand...

This was epic! Thanks for sharing.

Very fun read, I'll second or third for more like this.

Love it! keep these stories coming.

Haha! I'll have to remember that trick where the DM becomes a player and an unsuspecting player becomes the DM

A fun and funny read Sweating out your own PCs survival must have been … interesting.

I am reminded of a comic I saw (probably in Dragon)...

Player: I wish I was the most powerful being in the universe!
DM: Wish granted. You're the DM now.

Ralif Redhammer said:
I seem to recall Ren O' the Blade also showing up in Greyhawk Adventures. Which would also make sense.
Click to expand...


Thank you, I was trying to remember where I'd seen that name!

That Erol Otus cover of Eclavdra and a hapless adventurer is hands down my favorite by him. I really, really love his style more broadly but that picture is just out of this world.

That Erol Otus cover of Eclavdra and a hapless adventurer is hands down my favorite by him. I really, really love his style more broadly but that picture is just out of this world.

Worlds of Design: Leveling vs. Training
2 3 4