Staff member
A collection of REPUTATION based exploits. Now you can cruise around town with your entourage, get upgraded to first class, access emergency cash, and more!

Become a patron of EONS today: Read 249 posts by EONS and get access to exclusive content and experiences on the world’s largest membership platform for artists and creators. 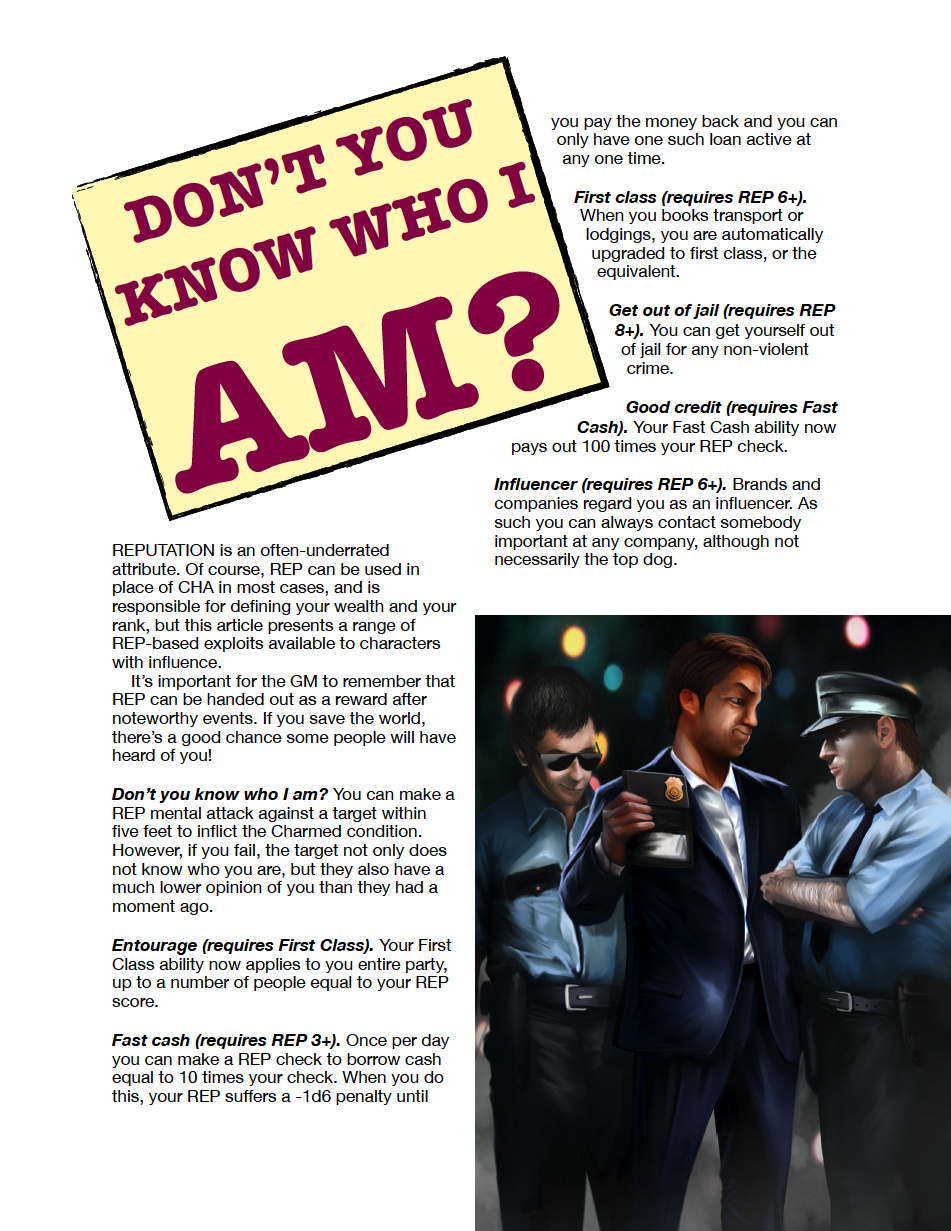 Pretty cool, always happy to see more useful stuff for WOIN: NOW! Would love to see more uses for Rep, especially ones that don't involve wealth, as my campaign has players working for a large agency with deep pockets, so they don't have to equip themselves. As it stands, Rep is pretty much a throw-away stat for my players, so options like "Don't You Know Who I Am?", "Get Out Of Jail" and "Influencer" will make Rep potentially useful.

Always thought that Spycraft 2.0 made the best use of Reputation that I've seen in a modern genre game, where one could spend Rep as a currency within one's own agency or network. It was meant to represent the agent's influence with his or her peers and superiors. Spending Rep in mission could find you a safe house in a pinch, a doctor who didn't ask too many questions, etc. Doing detrimental things to your agency or network meant you'd lose rep and there were serious penalties if one lost too much, like being burned by your agency.

Staff member
An earlier draft of the rules literally combined influence and wealth into a literal currency you could spend.

Kewl! Maybe some of those earlier drafts could make it in to Eons as alternative/optional rules choices?

Staff member
They often do!

Just a tourist passing your way...

TheHirumaChico said:
one could spend Rep as a currency within one's own agency or network. It was meant to represent the agent's influence with his or her peers and superiors.
Click to expand...

If you want something like that, take a look into the requsition rules in the last NEW: Solspace Updates; REP is used to assign characters a value they can spent at their quartermasters; after they give items back the req value can bei used again.
Higher ranks or special divisions can "unlock" special stuff (like sniper rifles for trained snipers or special items for communication for commanders)

Interesting, I'll check it out. Thanks!