I know that I'm not the only GURPS fan on ENWorld and many more of you use GURPS supplements with other systems. In case you missed it, there is a sweet deal on Kickstarter right now called the GURPS 2020 PDF Challenge wherein you can get potentially a dozen PDFs for $3. Right now the first ten are unlocked, so it's guaranteed to be at least 10 PDFs. Depending how many more pledges come in over the next ten days, and the unlock level of the final PDF, it seems quite likely that the last two will unlock. Here are the titles in order:
Of these titles, I am the most excited about The Incense Trail which covers the trade routes between the Mediterranean world and the Indian Ocean. It's the latest by Matt Riggsby who also wrote some of my other favorite GURPS supplements on Constantinople, Renaissance Florence and Venice, and The Silk Road. Although I don't run historical campaigns, I pillage aggressively from this material for my fantasy campaigns. Many of the other titles seems like they could be useful to non-GURPS players, though a few are focused mostly on GURPS crunch. (Sean "Kromm" Punch, the GURPS line editor, wrote a post on the GURPS forums that ranks them roughly on a scale of fluff to crunch.) Even if only one of them is of interest, $3 is a good deal.

If you're interested in other GURPS material, they also have additional pledge levels that allow you to purchase—at a discount—other PDFs from the ridiculously extensive GURPS corpus. For $30, you get all of the unlocked PDFs plus $30 credit for additional material. The $49 "New to GURPS" level gives you the two volumes of the GURPS Basic Set. At $99, you get all the unlocked PDFs plus $125 of credit. If you're not sure if a published supplement will be useful to your campaign, I'm happy to answer questions about the ones that I already have. 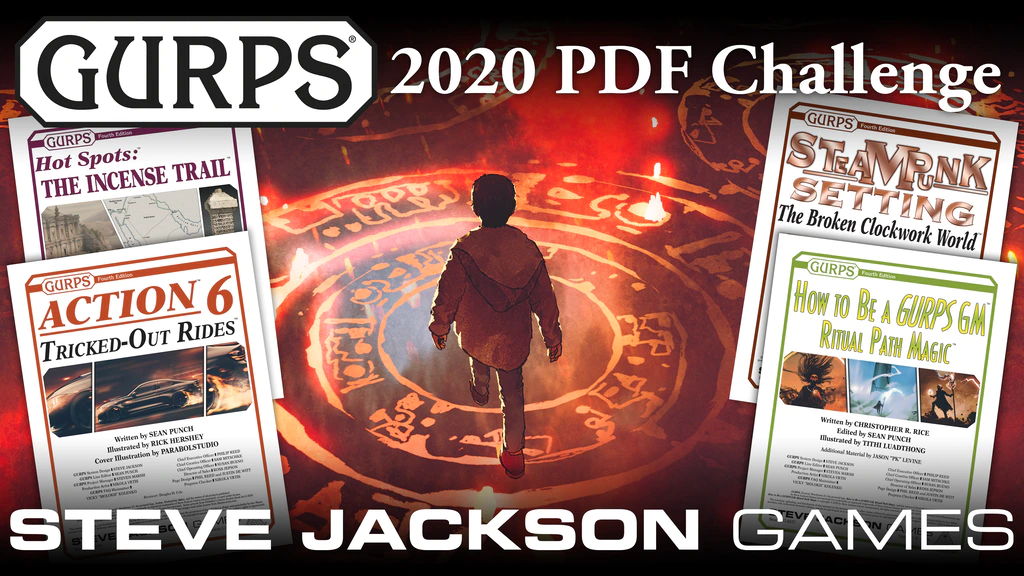 It’s been a long time since I played GURPS. The Incense Trail does look interesting.

Woohoo... the 11th PDF unlocked last night (GURPS Horror: Beyond the Pale) and the 12th unlocks when the campaign hits $45K. That last one, Megadungeons, is another one that I'm looking forward to.

See also Egg Embry's interview with Phil Reed and Sean Punch about this campaign (among other things).

The KS blew past the final stretch goal yesterday, so all 12 PDFs are unlocked. Three more days to get them for $3 or nab the higher level discounts for other GURPS goodies.