I'm at the place in our campaign where I need to start thinking about one of the villains connected to 2 PCs backstories: Flaviatticus the alchemist. I could use help figuring out how to stat him up...

A few quick facts I've established about the villain:

I've looked over the Artificer's Alchemist subclass and found it really uninspiring with strange spell list and fiddly abilities that don't translate well to a NPC stat block. So far, I've statted up some of his minions / colleagues as CR 5 alchemists (see below), so my hunch is Flaviatticus would probably be roughly in the CR 6 to 10 range. However, I'm struggling figuring out what unique things a master alchemist like Flaviatticus can do.

Alchemical Cunning. The alchemist can use an alchemical item as a bonus action, and applies it proficiency bonus to attacks with alchemical items that function as improvised weapons.

Spellcasting. The alchemist is a 13th level spellcaster. Its spellcasting ability is Intelligence (+7 to hit with spell attacks, spell save DC 15). It has the following wizard spells prepared:

Liquid Fire. Ranged Weapon Attack: +4 to hit, range 20 ft., one target. Hit: 5 (2d4) fire damage, and the target is lit aflame, taking 5 (2d4) fire damage at the start of each of its turns. A creature can use its action to makea DC 15 Dexterity saving throw to extinguish the flames. Water will not douse the flames.

Arcane Bomb. The alchemist lights the bomb and throws it at a point up to 60 feet away. Each creature within 5 feet of that point must succeed a DC 15 Dexterity saving throw or take 10 (3d6) fire damage plus an extra 1d6 force damage per spell slot expended.

Essence of Ether. A creature within 5 feet must succeed a DC 15 Constitution saving throw or become poisoned for 8 hours. The poisoned creature falls unconscious. It wakes up if it takes damage or if another creature takes an action to shake it awake.

Glitterdust. The alchemist throws an orb at a point it up to 30 feet away. All creatures within 5-foot-radius sphere of that point are covered in glitterdust. Invisible creatures becoming visible for 1 minute or until the glitterdust is washed off with water. Each creature must succeed a DC 15 Dexterity saving throw or become blinded until the end of its next turn. 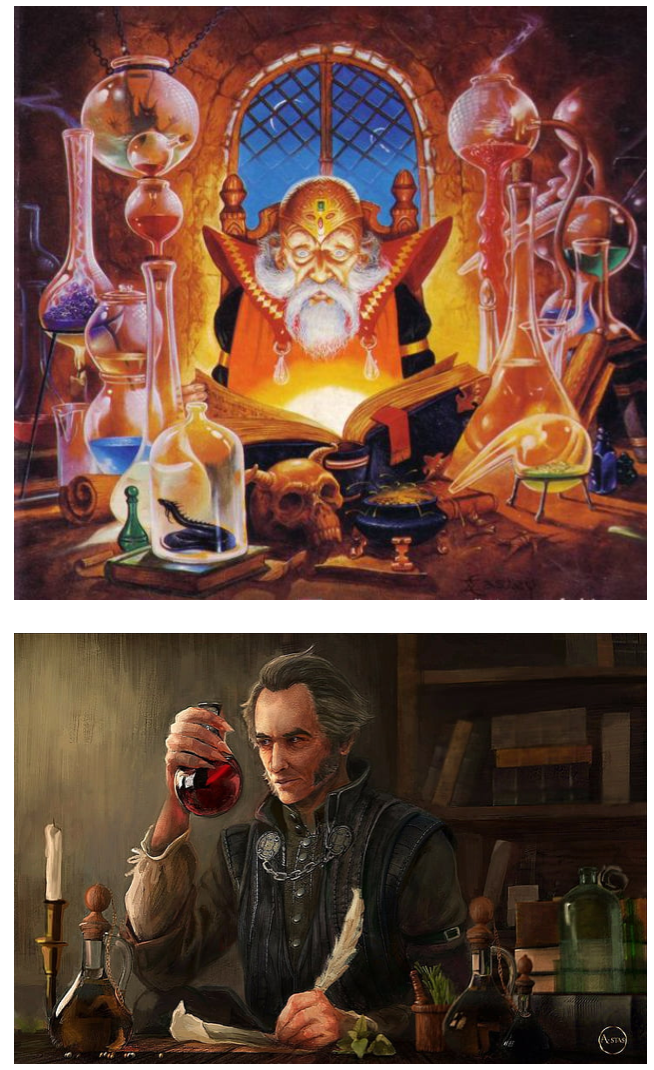 I will give you a proper answer later - takes time - but I will note that I share your dissatisfaction with the 5e alchemist.

But the joke answer takes no time - just make Gargamel

Classic sci-fi literature has a few examples. Dr. Jekyll and Dr. Frankenstein both come to mind.

For an Alchemist NPC, I would start with a Transmuter. Transmutation is the philosophy behind Alchemy, so it lets you do everything other than use potions and healing (which is trivial to add to a character)

As for ideas about their powers:
A concoction coated on their weapons that causes any target hit to be unable to heal.
Summoning oozes by throwing vials of stuff everywhere.
A Mythic form where they turn into a Brute after the PCs pound their nerdy form into the dirt.

Also not really a combat ready power, but extensive usage of Clones is a must.

The Witcher on Netflix has changed how I view possible alchemist tropes.

I would not think it too hard to reskin most any monster/NPC stat block to have alchemist/potion induced power flavor, so one that looks fun mechanically to you of your target CR range is where I would start looking then see how the mechanics can be described to fit your alchemist narrative description.