Yep, it's that wonderful time of the month again -- Gate Pass Gazette time! Here's Issue #6 for your enjoyment.

Gate Pass Gazette is the official magazine for Level Up: Advanced 5th Edition, and brings you official new rules content every month!

Archetypes: Playing Against Type
The classes in Level Up are far more versatile than they have been in any previous incarnation of the game, but even given that there are certain “flavor baselines” that people expect: adepts are quick and agile rather than strong and tough; druids don’t use metal armor; rogues are better at doing harm than preventing it. But even these baselines need not be so! Here you will find an adept that can happily trade blows with an ogre, a druid who is comfortable in plate armor, and a rogue that could be your best chance of making it out of a dangerous situation intact.
By Peter N. Martin

Pet Chaos: The Beast Unity Combat Tradition
Whether it’s a stealthy warrior stalking enemies alongside a panther, an archer calling a falcon from the sky, or a brawler facing down the odds with their faithful hound, the image of a hero and their animal companion is an iconic one. This combat tradition seeks to build on existing mechanics to provide players and Narrators alike a dynamic set of tools for cultivating just such a hero—or villain!
By Boo Ludlow

Forensic Magic: Spells of the School of Law
In a world of magic and gods, there are lawbreakers who cannot be caught by normal means. In rich and powerful cities, the spellcasters trained in the magical investigation of these crimes are known as the Arcane Inquisitors. These are their stories.
By Paul Hughes

Hardwired Heresies: The Mechanoskulls
Whether to honor the fallen or inspire fear in one’s enemies, different societies fit various kinds of technology and magical reagents into the craniums of the dead, forcing them into service even after they’ve shuffled off their mortal coils.
By Mike Myler 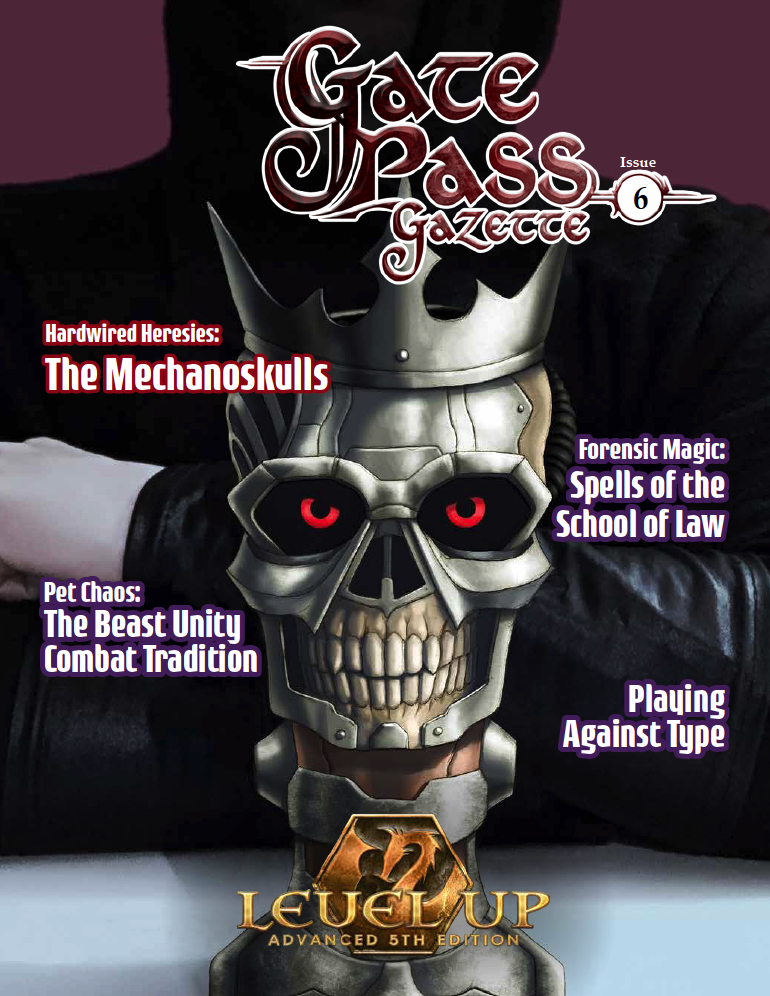 Supporter
Oh, this one looks -good-...

Also, I didn't know @timespike was doing a GPG article so similar to my EN5ider article to be released in the same month! Twinsies! <3