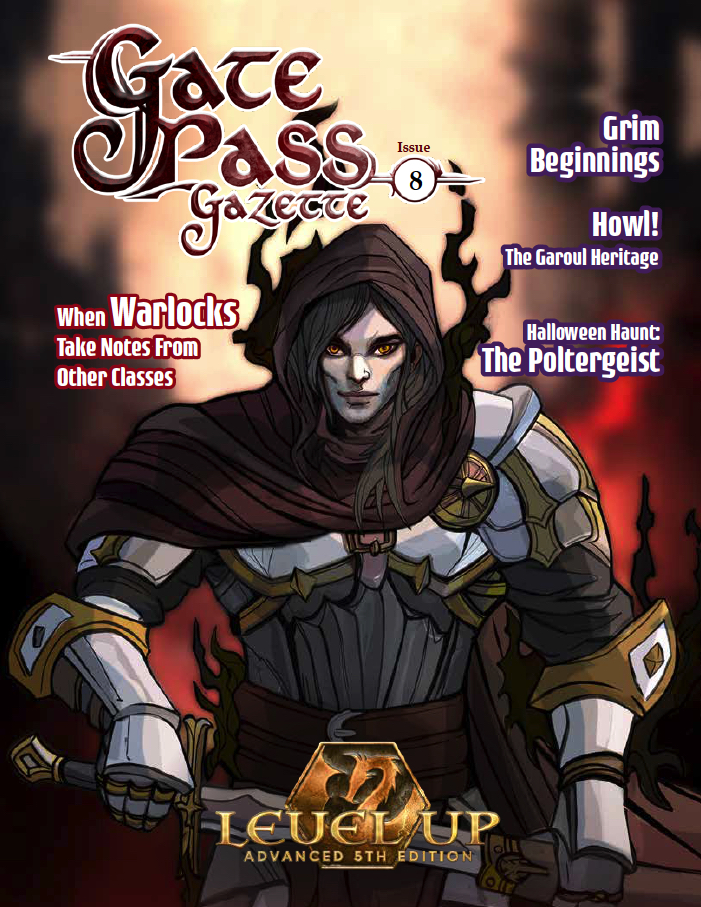 Grim Beginnings
While the archetypical hero whose hometown was destroyed may seem like a trope, happy, settled people don’t usually take up arms against dragons and dread rulers of darkness. Whether a character has been toughened by a difficult past, or their talents are misunderstood, hardships often give adventurers their spark of motivation or call to action. This article offers backgrounds that lend themselves to characters with rough origins, whether they’ve had hardship inflicted upon them, sought it out, or concocted up some of their own. By Peter N. Martin

‌Howl! The Garoul Heritage
The legends and sources of lycanthropy are famous throughout many civilizations, but less well-known are the garoul. Descended long ago from the children of werewolves, these lupine folk are free to embrace their wolfish nature without fear of losing control, making many good neighbors, fierce friends, and even fiercer enemies. This article features the garoul heritage and two associated cultures. By Josh Gentry

Halloween Haunt: The Poltergeist
The horror genre thrives on the protagonist’s vulnerability, plus a healthy dose of unexplainable phenomena. Most D&D characters, with their mighty martial abilities and the mystery-busting divination spells at their command, are nearly immune to this kind of horror—except at low levels. That’s where the poltergeist comes in. This article features a write-up on the troublesome spirits, as well as an even more dangerous elite variant. By Paul Hughes

When Warlocks Take Notes From Other Classes
The warlock class is one of the most flexible in all of Level Up, a chameleon that imitates what many other classes can do with diabolical twists. This article builds on that foundation, adding two new archetypes that corrupt familiar abilities from other classes. By David “Boo” Ludlow
Last edited: Oct 8, 2022

Woohoo! This is going to be fun!