From the creators of the fantasy RPG setting HârnWorld... 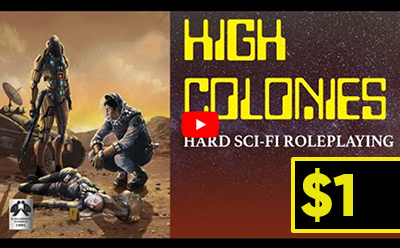 "Earth has been ravaged by nuclear and biological warfare known as the Earthome War. Now a barren and poisonous wasteland; humanity is thought to be extinct here. Remnants of humanity are scattered on planets, moons, and space stations throughout the Solar System. Once the brightest achievements of progress, the High Colonies are the last hope for humanity."

It's set just over two centuries in the future, and seems to be "hard sci-fi" (so no FTL travel... I assume travel times will be similar to The Expanse RPG, maybe?). There might even be a bit of existential horror as the human population is only ~20 million people, but it's possibly just wishful thinking on my part. At least it seems survival gameplay. It features "bio-engineered humans, sophisticated robotics, and deadly energy weapons". Also "many colonies are dominated by hard, merciless dictators and extremists. Pirates stalk the trade routes between asteroids, planets, and stations".
T