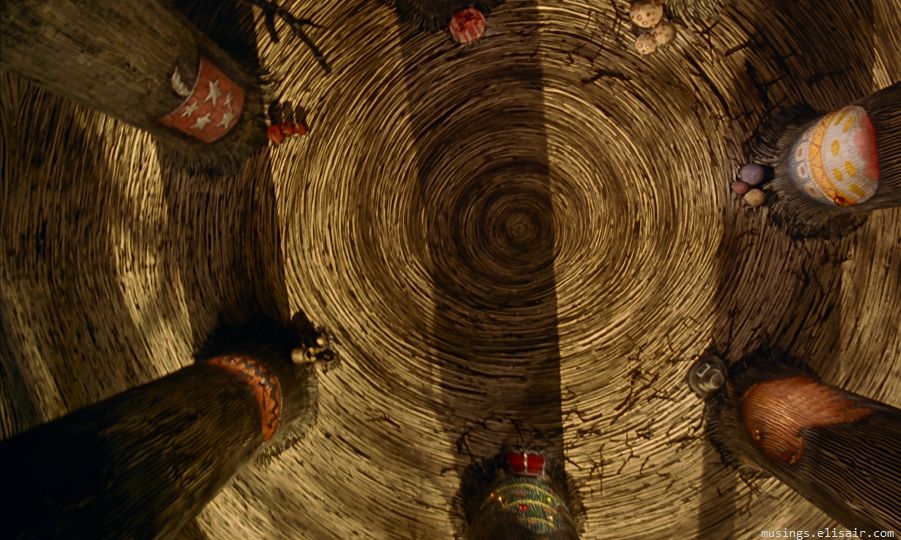 The Holiday Worlds of Old are separate realms that are each linked together and the real world. The seven Holiday Worlds represent Independence Day, Halloween, Christmas, Thanksgiving, Easter, St. Patrick's Day and Valentine's Day. Each Holiday World provide whichever holiday it is associated...

Does any one else find this to be a cool seed for a setting, a bunch of Holiday worlds with portals in each to the others on trees in hinterlands?

You give each their own D&D twist.

It's been a few years since I last watched The Nightmare Before Christmas. Going to have to fix that. As for D&D, a setting where the players are all in service to the rulers of the holiday realms would be fun. Perhaps a variant of the destiny rules from Theros book for each holiday. They have to keep the peace, do the dirty work, fend off invaders from the outworlds, etc.

I think it would be a cool adventure for Mutant Crawl Classics. A friend of mine ran a MCC one-shot with an X-mas/Santa theme, which I expected to be pretty bad but fun in the way bad-movie nights with good friends is fun. But it was actually a good adventure and worked very well in that setting and with that system.

Most of the holiday’s in my world are based around the holy day’s of the deity-like entities that are revered by the mortals of the world, or days that mark major events that happened in the plane’s past. The various races also have holidays specific to them.

I’d be tempted to give them a « realistic » feel. A Christmas winterland, more forested Siberian than Arctic, with somewhat legit reasons for people to decorate fir trees around the house, and a semi mythic ruler bringing gifts to his good subjects and bad stuff to the naughty (criminals?) ones. Or perhaps there are hundreds of these red-clad bailiffs and they are everywhere simultaneously in a country where reindeers make better beasts of burden than horses.

a plane of everlasting spring where the currency takes form of decorated eggs. Bunnies are considered sacred and source of good fortune. Children are told that bunnies lay money (eggs). That isn’t true of course, but it teaches kids to be nice to them.

A Halloween town on a transit plane where the souls of the deceased pass on their way to the afterlife at night. Most will leave you alone, but the bad ones will try to trade place with you, sending you to the realm of the dead to take your place there. Better disguise yourself as the dead if you got to go out at night, least the bad souls recognize you as a living.

It occurred to me that these Holiday Worlds would be cool as interlinked Domains of Delight.

Henadic Theologian said:
It occurred to me that these Holiday Worlds would be cool as interlinked Domains of Delight.
Click to expand...

It would work remarkably well indeed


Yeah it's my favourite idea so far. I would have to of course replace Independence Day World, Thanksgiving World, and any Saint Holiday Worlds with D&D Holidays like Shieldmeet.

Some of these don't travel well...


Indeed. Locally for me, we'd have Labor Day world, Cup Day world, Grand Final Eve world, ANZAC Day world, and Queen's Birthday world, which is not in any way related to the day the queen was actually born on. That's some weeeeird and obscure Domains of Delight, right there...

Yeah, but it could be cool to add holiday worlds from cultures that your players may be unfamiliar with. I can see it now, our band of heroic adventurers find themselves in Chinese Ghost Month world. The cleric turns the first ghost they stumble across, only to have to roleplay and awkward social encounter apologizing to its horrified living relatives.

I dunno. Most nations on Earth have some notion of an Independence Day, Founding Day, or some occasion where they celebrate their victory over an existential threat or a monumental achievement of their society. E.g. in France you don't have a holiday called "Independence Day," but you do have Bastille Day, which is a pretty close analogue, and Germany has Unification Day when East and West Germany were reunited as one nation. You don't have "Thanksgiving" in China or Israel, but you have the Harvest Moon Festival and Sukkot, respectively, both of which are heavily flavored with the same kinds of ideas (the earth's bounty, togetherness with family, thankfulness, reflection, and in the Moon Festival's case, a dessert associated with this holiday). Many cultures throughout human history have had special celebrations of the beginning of spring, and there are often "ghost festivals" or other stuff relating to death and the afterlife in late Summer or early Autumn.

St. Patrick's Day is probably the only one unlikely to have reflections in other cultures, since it's basically "(Catholic) Irish Heritage Day," but even then I could see potential for it when adapted to fantastical settings with a deeply proud culture embedded in them. As an example, in 4e's Points of Light setting, I could see there being a holiday celebrated primarily by dragonborn remembering the heights of lost Arkhosia: eating and drinking traditional fare (which is a bit strong/pungent for most non-dragonborn), engaging in jousting or magical fencing duels (referencing Arkhosian High Style and/or the Ninefold Path), setting off fireworks that resemble dragon-breath or the like, collective wardances, etc. For non-dragonborn, it's an excuse to get smashed on dragondraught, eat fireberry pie and/or flaming fire flakes (hot! Whaddaya know), and maybe snag a dapper swain or charming wench for a night's revelry. Call it something like Golden Dawn, claimed to be the day the Golden One was acclaimed ruler of the seven city-states that formed the empire's heart.

Spring, freedom/unity/solidarity, romantic love, thanksgiving, family love, the afterlife, and national pride are all common motivators. You'd have to tailor them (and the specifics of how they're celebrated), but honestly, it's hard to go wrong with at least the first six of those (and, as noted, you can get pretty creative with the seventh IMO.)

Halloween-town is the Shadowfell, full stop.

I like to think that Christmas-town and Easter-town are Domains of Delight.

D&D 5E Kalyna Country - trying to figure out monsters for the area.