Supporter
Players had not been told anything prior to session one. Things started a little late because of one player getting stuck a little late at work & a second getting a work call. That gave a little time for me to ask why they were on the road near Hengistbury. At first players started trying to fill in a meet & greet each other's PCs after that but I had to point out that they weren't in a situation where they could do that kinda thing yet so they did some last minute character touchups. 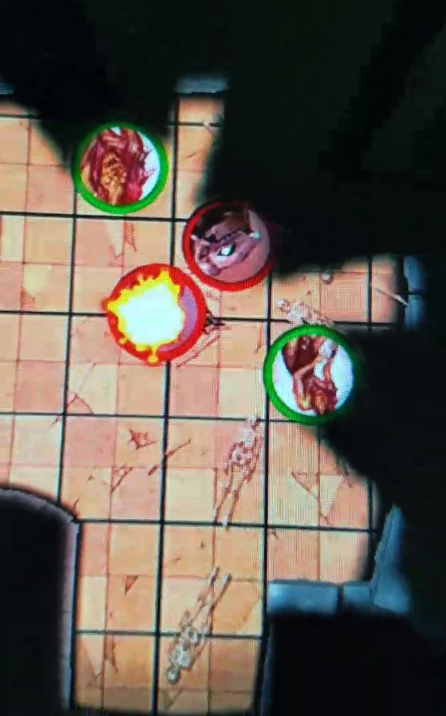 I found a suitably ominous image for annika & had the khalkoi on fire both obscuring the horror & keeping the players further in the dark. That fire was also the only light . Things opened with the players being asked to give me a wisdom save & using that as a reverse initiative where each player got to learn a little bit of what's going on physically around them from my description & take their turn but aside from being pretty sure that the well dressed zombies were not their friend & having no idea if the fully armored dragonborn or the humanoid on fire was. One player tried to put out the fire, a second tried to attack a zombie, a third whiffed on annika, mostly they tried to figure out what the sides were & how they fit in. As soon as the first round ended the two doomed combatants went from very obviously in the process of crumpling to the ground last round to finishing that process where I declared them doomed & had the zombies simply walk off paying the PCs no mind.

The players trying to search for clues from each other & put that last round back together into a shape they could grasp was fun for a bit until one with arcana asked wtf that wasp thing was, unfortunately he rolled like a 2, a different PC with culture was a useful substitute though & I was able to describe a "rather scary horror play" that focused on something similar taking over a town Along with a chance to point out that annika was famous for different reasons.

Players very slowly started exploring, found the rations, & were quite freaked out by a room filled with several well dressed zombies picking up bones to put in coffins without paying attention to the players. With a religion check I decided to tell the cleric that some religions & churches use undead for menial labor but they can't leave the church & that he thinks he knows some if the usual commands but they were limited to things like lift this follow me pick these up etc.

It took a while for the players to come up with a plan for the acid hall & an intelligence engineering check threw them for a doubletake "wait what" loop but things went well with three or four players using skills abilities & items they had to figure something out. Since their plan involved the lever the party met belton & found the wanted posters while still split by the cube hall for a rather amusing bit of hurdles being added to unraveling the big reveal . Ultimately they decided to leave both bodies in the catacombs & went off to do belton's tasks with the intent of skipping town with him but I called an end if the session about when they finished those three & Annika's brother made his entrance so they can continue next week