Is it any good? It's got good reviews is it useful as an RPG addition? Would 5e stats convert over? Thanks!

Note that's my affiliate link above.

Is it any good? It's got good reviews is it useful as an RPG addition? Would 5e stats convert over? Thanks!

Note that's my affiliate link above.

Is it good?
If you are looking for a way to quickly resolve mass battles for your D&D game - certainly not. Converting 5e stats I think would be doable. This game has a level granularity and variety some will like, but it comes at a cost - time. You probably could play an entire Kings of War or Warhammer Fantasy Battle game in the time it takes to play a quarter game of Battlesystem.

So here's why I like it and most gamers do not.

D&D players typically are looking for a game where the mass combat can be resolved quickly and their PCs play a key role in the battle. It's not going to work for them. The system is not quick and your PC can be smashed if you make the wrong move. PCs can be pivotal in a battle, but depending on the scale of the conflict, are probably not the most dangerous things on the board.

Wargamers are probably not going to like it because there are just so many judgment calls - particularly in the areas of magic spells. Spells and magic would be some of the trickiest stuff to convert to 5e BTW.

I like it because it provides a framework for a massive D&D campaign climax battle with tons of figures and tons of dice. The PCs have a real stake in the game and are a lot less flippant about committing a cavalry unit that has Frank's fighter PC in it. I don't think anyone would run the game regularly, because it is pretty much an all day commitment - I cannot see a meaningful battle being completed in less than six hours. It is a very cool alternative to the narrative style running of a mass combat that most D&D campaigns use these days. I do think you have to like mass combat games to enjoy it - it is much more of a mass combat game than a RPG supplement.

So for me - it's good. For you? Well, that depends on what you are looking for,

I read it not long ago. As someone who played a lot of mass battle war-games it feels outdated and outclassed.

If I was to do a massive battle with miniatures today, I would use SAGA Age of Magic by Tomahawk Studio as the frame. It has characters, creatures, war engines and spell casters. It's very streamlined and easy learn and play. It's a better and simpler game than Kings of War or Warhammer Fantasy which are too granular for their own good.

Never played the second edition version, but I loved 1e Battlesystem- but it was definitely not quick. A large battle could take a whole session. I'm not sure how different the 2e version was, but I'd guess it's similar in time required, since 1e and 2e D&D were pretty closely compatible.

I never got to read or play the old BECMI War Machine system but have heard that it's amazing. If you can find it somewhere, it might be worth checking out.

My introduction to D&D was actually through the 2e Battlesystem book; a neighbor gave it to me for the miniatures painting tips in the back when I was like 12, and a few years later I actually started playing it.

As a tabletop game it is ok, but as others have said it probably isn't going to work great for most people. Especially since the rules (and conversions) are based on 2e AD&D conventions.

I'll second the Basic D&D War Machine rules as a better option, because they're simpler and in many ways 5e has more in common with Basic D&D than it does with AD&D/2e. It's still gonna take some real work to make it happen though.

On the other hand, if you need an intro to painting miniatures, the 2e Battlesystem book has a pretty good section on that.

Warmachine basically has you calculate the relative strengths of each side and then dice off on a table to determine the winner. Not a miniatures system at all - more of a DM tool to determine the results of large battles in an abstract way. It is detailed in the Companion book of BECMI and in a slightly abbreviated form in the D&D Rules Cyclopedia.

pogre said:
Warmachine basically has you calculate the relative strengths of each side and then dice off on a table to determine the winner. Not a miniatures system at all - more of a DM tool to determine the results of large battles in an abstract way. It is detailed in the Companion book of BECMI and in a slightly abbreviated form in the D&D Rules Cyclopedia.
Click to expand...

That is correct. I was a bit disappointed when I read it this winter. With a name like Warmachine I was expecting something like a cardboard counter & hex representation of a D&D battle. Which is the cheapest and best way to do a mass battle.

Another option is to use a game like Rune Wars Board Game to play out the battles : 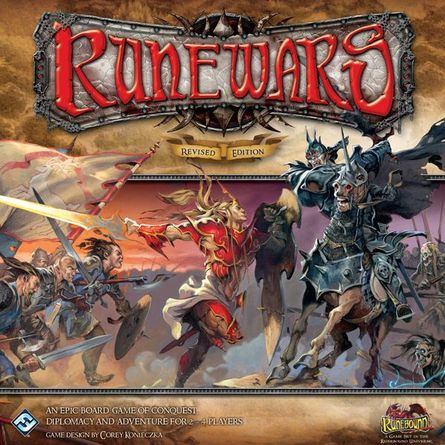 Runewars is an epic board game of conquest, adventure, and fantasy empires for two to four players. Runewars pits players against each other in a strategic game of battles and area control, where they must gather resources, raise armies, and lay siege to heavily fortified cities. Runewars takes...