A week ago, I launched my first Kickstarter in order to get this Roleplaying Game published. We're right now at 173% of funding, and unlocking Stretch Goals.


Facing the Titan is not a game of tactical combat. It doesn’t feature a riddle to solve in order to win the fight. It’s a game to tell the stories of the Companions and the Titan. And the epic fight that will ensue. The Companions are set to win this fight, but at what cost, with what consequences?


Facing the Titan will be released as a PDF and as a Print-on-Demand softcover book. The book will feature the rules for running the game, advice on how to play the game and six Titans. Each one of the six Titans will be illustrated by Roger Heal and will be included in a micro-setting, ready to play. The book will be around 160 pages, in a 6''x9'' format.

Here is Lofituina, one of the Titans you will be able to face.

This RPG is GM-Less and requires zero preparation. It's suited for a one-night game of 2-3 hours.

If you have any question about the game or the campaign, feel free to ask!
Last edited: May 20, 2019

The last Update unlocked a new Titan by Rafu and revealed the next one ! Which will be inspired by a song from Diablo Swing Orchestra !

Also, a french news site asked me some questions about the game : http://lefix.di6dent.fr/archives/8391

That last weekend got the funding up! I'm still surprised by the success, which is very encouraging!

In the last update, I talk about the Motifs, a mechanism at the hear of the game system. And I reveal a surprise for the €2000.

I've got some more to reveal, and I'll demo the game in Nantes, France at the Nautilude festival next weekend.

Facing the Titan reached 250% of funding, and we're just in the middle of the campaign. All the Stretch Goals I've prepared are almost gone ... More Titans should come ...

Speaking of Titans, the Update #9 introduces you to the 6 original Titans. Meet them! And tell me which one you prefer!

Regarding Stretch Goals, the last one unlocked will add a new article to the game. There will be rules variants in order to share the discussion between multiple players when dice are rolled, instead of having the focus on one only.

A surprise SG at €2000€ unlocked the possibility of a Hardcover.

Next Stretch Goal is at €2500 and will add another Titan. Details about it later.
Then, at €2700, another way to play RPG will be explored. Facing the Titan will get a solo variant!

Here is Gureintinku, the Bronze Wing : 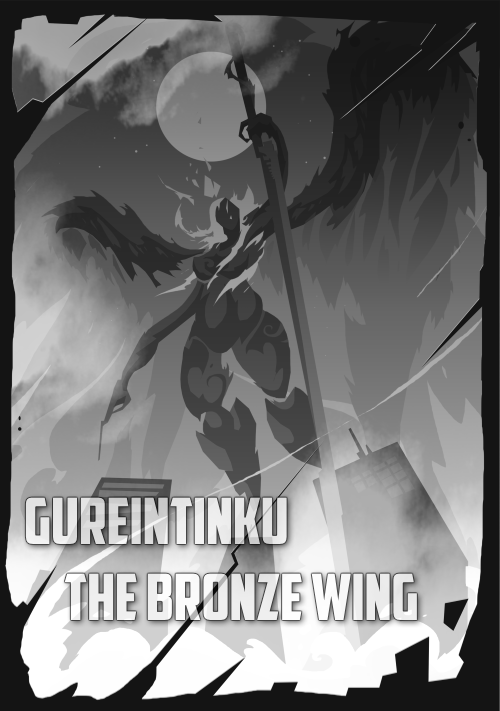 In update #10 of the campaign, I give you the rules of the game. Yep.


It's the almost final rule, but it lacks revision, examples, layout and so on. But if you're curious about the game, the rules are there.

So this is the final week of the campaign for Facing the Titan. The final week means the final Stretch Goals. We just unlocked a new Titan by Manuel Bedouet! 6 basic Titans, plus 4 guest Titans, plus one Titan from me, that makes 11 Titans! To which we can add the two Titans who will arrive with the "Titan Slayer" rewards, that already gives 13 Titans!

And two others are announced in Stretch Goals. One by Rafu, the other by Khelren.

But before these new Titans, there's a Solo Mode to unlock. 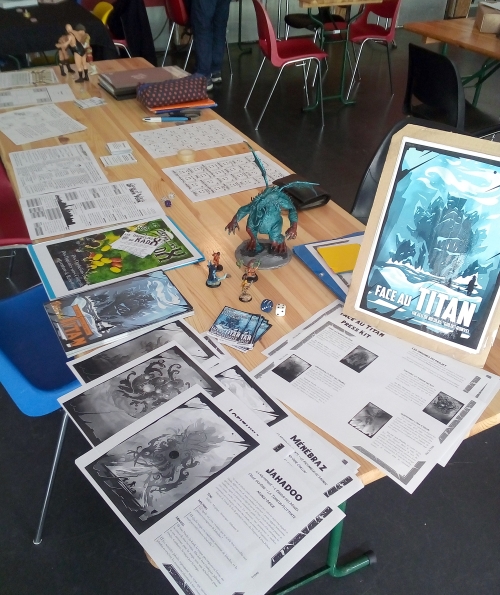 Also, a Preview is coming up. Which Titan do you want to see in it?

The Solo Mode has been unlocked.

We are now a few pledges away from the second Titan by Rafu, and then we will get to another Titan by Khelren, a french author and translator. He published The Sprawl in french, created Dominion, and also worked on other campaigns like Godsend, his World of Legacy.

And if you look closely to the campaign homepage, you might find something else.

By the way, in the last update, I talk about Fulfillment : https://www.kickstarter.com/projects/gulix/facing-the-titan/posts/2513955

A new Titan by Khelren is unlocked. And a list of leading questions will be added.

Cthulhu, that I don't need to introduce, right?

And the Wall. The Big Wall of the North. Inspired by some HBO's TV Show itself inspired by a series of books.