Nice to see that your still around, Knightfall. I've been in lurk mode myself until now trying to decide if I want to post any of my homebrew here or not.

Buddha the DM said:
Nice to see that your still around, Knightfall. I've been in lurk mode myself until now trying to decide if I want to post any of my homebrew here or not.
Click to expand...

I'm always here, although, now, I tend to lurk more. I spend a lot more of my time posting about Kulan on The Piazza. And like here, I have a dedicated forum for World of Kulan there; however, the World of Kulan forum on The Piazza is a bit more 'visible' than the campaign/social group forum here on EN World. (Of course, now I have the Kulan wiki here [which I will get back to updating as soon as my night class is over].)

If you do post your homebrew here Buddha, make sure you send me the thread's link.

What I'm doing for Janardûn right now is compiling a comprehensive monster list for the continent. I had attempted such a list before here on EN World, but I got distracted. Since then I've acquired several new sourcebooks for D&D v.3.5 and the d20 System/OGL. The revised list is getting close to being done, and I will be revising the lists for the other continents and regions of Kulan.

Knightfall said:
If you do post your homebrew here Buddha, make sure you send me the thread's link.
Click to expand...

My homebrew is for a setting that I call "The Shardrealm", and is built upon the Pathfinder RPG rules. So it might take a bit of work to reverse engineer it to work with 3.x and not overpower those materials too much. If you want a sneak preview fire me a pm with how I can get it to you.

Buddha the DM said:
My homebrew is for a setting that I call "The Shardrealm", and is built upon the Pathfinder RPG rules. So it might take a bit of work to reverse engineer it to work with 3.x and not overpower those materials too much. If you want a sneak preview fire me a pm with how I can get it to you.
Click to expand...

Yeah, I like the Pathfinder RPG, but is not simple to reverse-engineer PFRPG material to work with D&D v.3.5. And I really don't need to add a bunch of Pathfinder sourcebooks to the design of Kulan. I have more than enough options already. Heh.

I'm bumping up this thread to point out that I've restarted my Aerie of the Crow God PbP Game here on E.N. World.

I'm also considering creating a second PbP game. It would be set in my version of Waterdeep. I've created a Waterdeep thread in my World of Kulan campaign group's forum to build a viable plan for running such a game. It's not for sure that it will happen, but if i feel i can run both t once, I will.

Attached is an updated version of my Harqualian Timeline.

Most of my work on Kulan has been related to runnning two PbP games -- one here and one on The Piazza. As a result, I haven't had much time for this thread or the other 'continent/region' threads in the Kulan social group forum. There is the Kulan wiki here on E.N World but i haven't updated it in a while. Most of the new material I've created for Harqual now goes on my Kulan World Journal blog: https://kulanworldjournal.wordpress.com/

The most recent thing was a updated hex map of the Eastern Shores, circa 758 N.C., and even that was back in the middle of February. I guess I sort of hit a wall, creatively. I took some time and played a few Xbox 360 games, but now I'm feeling the itch to create more for Kulan.

And Harqual is always the easiest part of the world to create for. So far, I've created a new thread for my primary Kulan story hour I've also begun a new story hour that may or may not have traction. I'm not sure how it's going to go at this point.

Anyway, I want to create more content for the Lands of Harqual.

FYI... most of my work for Kulan has been maps I've created for my PbP campaigns. I've posted those to Kulan World Journal already. I haven't done a lot of mapping since. I now have three Kulan pbp games. The latest one is set in Bard's Gate in the far northern region of western Kanpur. It's been slow going but it's still active. (I now have 4 pbp games going, so I've been a bit burnt out from having to keep up with them all. I might need to push the Crow God game to fast conclusion before my head explodes.) The Bluffside game over on The Piazza is still going, but I've had rotating players. I hope to give it a good send off at some point.

I do have one Kulan 5E thread for the conversion of some the races that have appeared in this thread, but it stalled a while ago: [5E] World of Kulan: Race Conversions

Hmm, the more I look through this thread, the more I find that it has become really hard for me to keep track of the gazetteer entries I've posted, as well as other aspects of Harqual. I think it is time to create new Harqual threads in the World of Kulan campaign group forum for certain aspects that need to be compiled. The gazetteer entries, for sure. I don't think the races need to get redone, but maybe I should take a crack at compiling certain sections into new threads.

I recently began the process of re-revising my Lands of Harqual overview map in Hexographer. I wasn't 100% happy with how it looked as I tried to create child maps from it, so I delved back into the map in the program and went nuts. I had only put icons of the most important cities and castles on the overview becuase I was concerned that the program wouldn't be able to handle me adding hundreds of icons. Well, there was one day I was sure it was going to crap out on me, yet I manged to get it to work. After that one day, it worked better. (I don't know why.) It is now done as best I can (fingers crossed), and I'm restarting the process of making child maps from it.

Since the main map is at 60 miles per hex, I wanted to see if I could "easily" trace an underlay map at 24 miles per hex. It was way easier that I thought it would be... of course, it helps that 60 divided by 24 is 2.5. That made it a simple thing to expand the underlay to 250% in Hexographer. (I use the free version.). The attached map (no icon names added yet) was my first test case. It shows the main pirate island that acts as sort of dividing line between the northern Sea of the Sun and the southern Karmine Sea. It is known as Blackhound Island and this is the first time I've ever mapped the island (plus its neighbors) out completely.

To say that Blackhound is infamous in the waters surrounding the Lands of Harqual is an understatement. Even though it is somewhat developed, there is little law on the island except the Pirate Code. It's "fight with your shipmates, but if it goes against you, cut line and haul anchor. If someone gets left behind, that's their problem." It makes Blackhound and its only real city, Thunderport, a dangerous place to live and love. It's important to note that Thunderport doesn't rule over the rest of the island (although sometimes they think they do). It is simply the strongest pirate enclave. There are four main enclaves and the "so-called" rulers of these aligned communities change yearly (sometimes monthly).

Note the areas of dead forest. There are dangerous things on the island that no one dares try to control or lord over. The worse of the these is the undead green dragon of the large southern deadwood. The island was named for him and the pirates of the island know better than to risk Blackhound's Wrath. Blackhound is said to have a nose for treasure and often demands tribute from Thunderport or one of the other communities, if he feels they need to be taken down a "peg" or two. Arr! 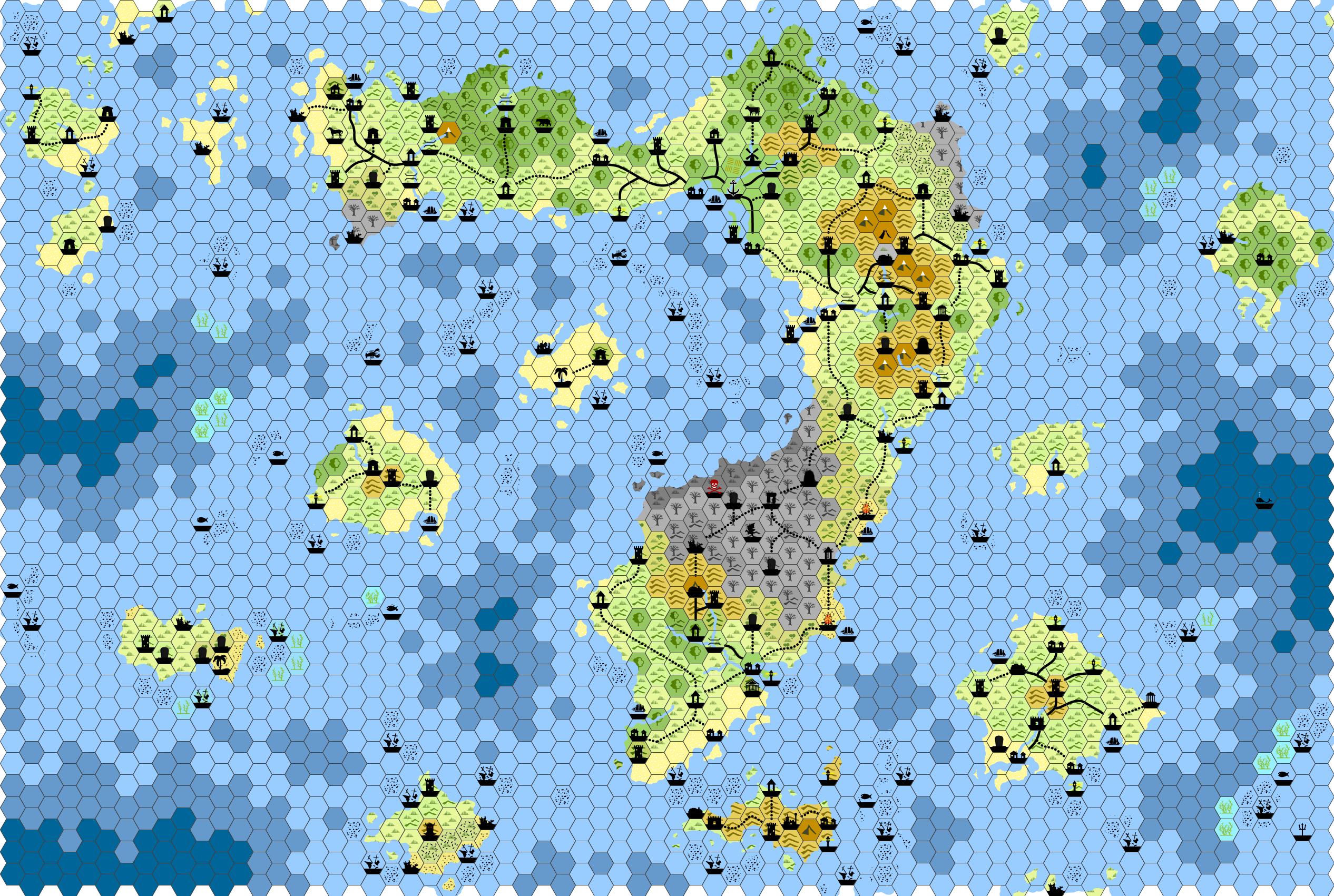 Hmm, it seems this old thread ended up in the Pathfinder & Starfinder forum. It would be great if I could get it moved to the D&D Forum.

Harqualian centaurs live in the forests and plains of the Northlands (north beyond both the Great Forest and the Greystone Mountains) and are steadfast allies of the humans known as Northlanders living in Harqual’s arctic lands. For as long as those peoples have lived on Harqual there have been Harqualian centaurs living alongside them, or at least that’s what both the Northlanders and the centaurs say when asked about their shared heritage.

All Harqualian centaurs have thicker hair than centaurs of other lands (and worlds) and the human torso part of their body is covered with hair front and back. Males often have thick beards, which are usually kept braided and their long manes are always tied up in a ponytail. Females do not have facial hair and their manes are left loose to blow in the frigid winds of the Northlands.

Centaurs speak their own racial language and the Northlandic tongue.