I will open this thread to always update about the news about this Kickstarter, including the stretch goals and every information about the product 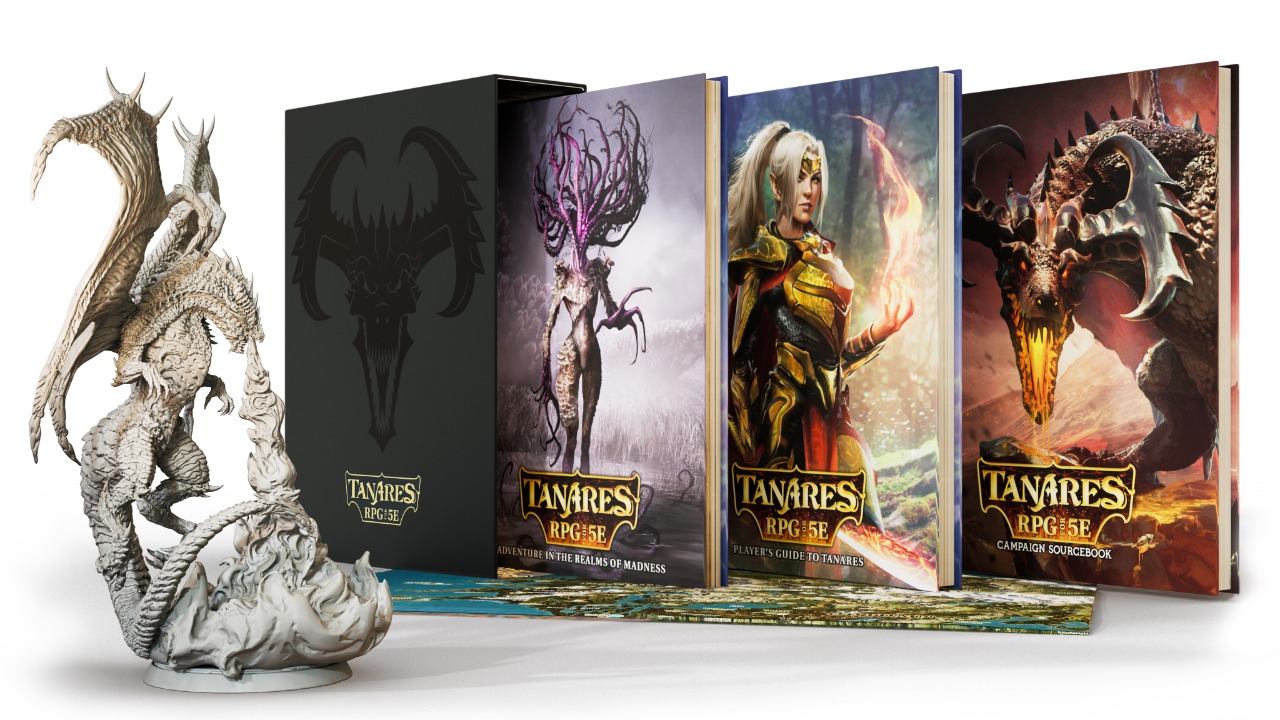 Why not just bump the other one with updates?

Link to the Sample Adventure. Can you find the murder?

Scribe said:
Why not just bump the other one with updates?
Click to expand...

This thread I would like to use as a diary, always informing every news and of course, get all opinions to improve the scenario and the items we should offer and design

With solo board gamers pouring in, and in present times, when people’s busy schedules align once every thousand centuries, we thought it would be unfortunate to have so many people miss the experience of playing the incredible story of “Adventure In the Realms of Madness,” especially since it relates to the story of the epic campaigns in Arena and Tanares Adventures board games.

Besides, what if we could make masters learn the adventure in an interactive, fun way, which is more interesting than simply reading the adventure book cover-to-cover?

For the solo gamers out there, and for the masters who want to feel and learn the adventure from the player’s perspective, we made an effort to create a GM-less experience, one we believe is simple to handle and entertaining to play.

The pack is currently under development, as all details of the adventure book have not yet been closed. Graphic design of the components is the last stage of development, so all we have currently is a ton of charts and tables and drafts and texts that are almost ready to be organized and placed with artwork in the cards and booklet which come in the pack. But we think it all can be adequately explained in the paragraphs below.

In the 200-page booklet you will find descriptions of places and characters found on your journey, including excerpts from the adventure book — changed to keep everything spoiler-free. Each of the hundreds of situations we expect you to encounter during the 11 chapters will be there, with options of choices. Let’s give you an example directly from the adventure sample currently available in our website: there’s a moment when you find a dead body. In a game with a master, they will ask a generic question, such as “what do you do?” And there are literally millions of possibilities: “Call a guard,” “Torch the body and get rid of all incriminating evidence;” “Run!” “Investigate,” etc. etc. etc. — And it is up to the master to improvise based on each response.

Q: Do my choices and actions during the adventure change the outcome of the story?

A: Yes! There are many different paths and your choices have long-lasting consequences, both good and bad, on your journey.

Let’s say, in the example above, you choose to call a guard. Such choice is meaningful and have lasting consequences (if you’ve read the sample, you’ll know that each NPC encounter during the investigation, the climate in the building, and the future trial, can be affected by this choice). For minimal bookkeeping, each of these important choices is represented by an euro-sized fact card — having one in your possession may represent changes in future events, even many chapters ahead. For example, you may have a card “character X is dead,” which annuls the future option “interrogate character X.” These cards could also represent achievements, objects, and items acquired during the adventure.

The booklet also solves other situations such as skill checks and is the most important tool in allowing you to forge your own path, deal with interesting puzzles, explore incredible regions in your quest to collect powerful ancient artifacts, and venture into the Penumbral Plane to face an ancient entity of immense power.

Q: Who controls the monsters during combat?

A: Each monster (in each expected encounter in the adventure) has a unique card that details its strategy and priorities when taking actions. You won’t need to make decisions for the monsters, but you will be required to execute their movement and attacks.

Since there’s one card per monster per encounter, we custom-made each monster’s strategy to adjust behaviors according to each expected scenario. For example, the Goblin Witch’s priority in the first encounter is trapping characters in her web — if they’re on the stagecoach. Once the spell has been already cast, or if the characters have moved away from the stagecoach before her attack, the priority changes.

If you’re into a “theater of the mind” style, that is possible, but we’ve also provided instructions for you to play with miniatures and maps, as these poker-sized cards are prepared to challenge your tactical thinking, and there are more than 100 of them, to account for all villain types and all expected encounters.

Q: What books do I need to play the solo mode?

A: You need at least the PDF version of the three basic Tanares books, due to the presence of monster stat sheets in the Sourcebook, the Adventure Team rules in the Player’s Guide, and a ton of different stuff from the Adventure book.

Q: Can I use classes presented in other books?

A: Yes! You can play with any build, customizing and leveling your character up as you want.

For this adventure, you can create your own character, using any class, race or even feats you like from any 5E-compatible content, including Tanares’s new classes — but you’re not limited to them. To help you fill your party you will be able to use full characters, Tanares Simplified Class characters or special “NPCs” of different roles that will act as party members under your control. These companion NPCs will level up alongside your character, and will aid you on your adventure with the same efficiency of a player character — but with much less complexity for your gameplay.

Q: Can I play the “solo mode” with other players?

A: Yes! It is actually a “GM-Less” mode, so you can play with up to four players and no GM. If you’re playing solo, though, there are tools to “fill” your party with easy-to-control, premade side-kicks.

Our goal with the pack was to get you through the entire story of the adventure while simulating as much as possible the endless paths and possibilities your party can take, while giving you the best combat experience with the least amount of complexity to actually handle and run the game.

For people that enjoy Dragon Miniatures 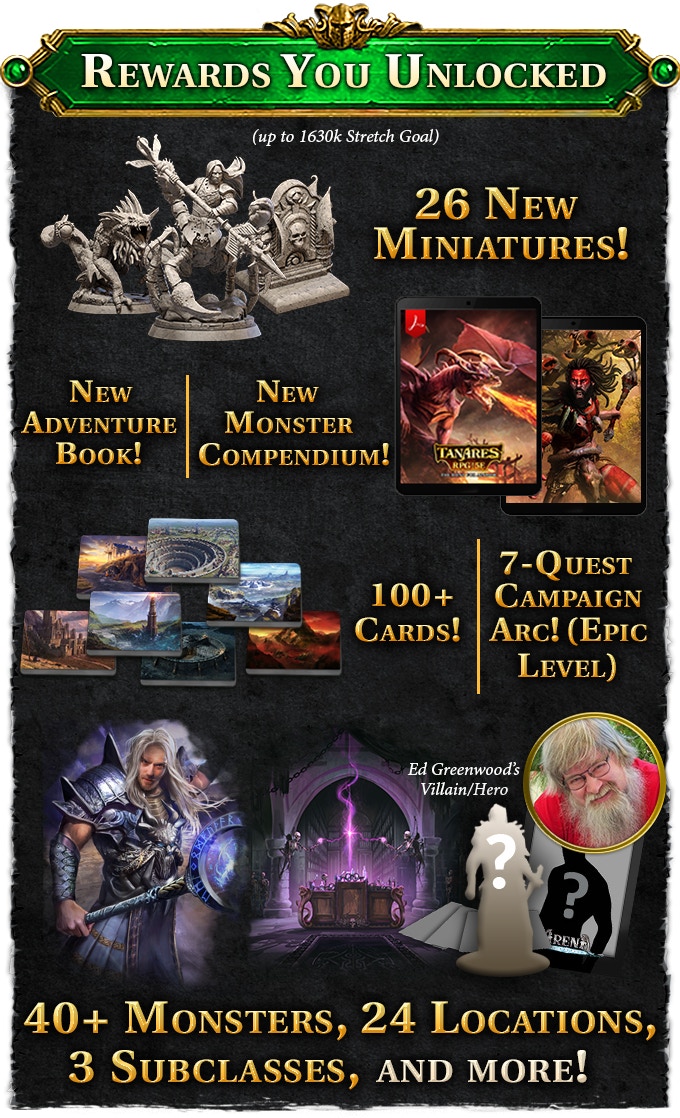 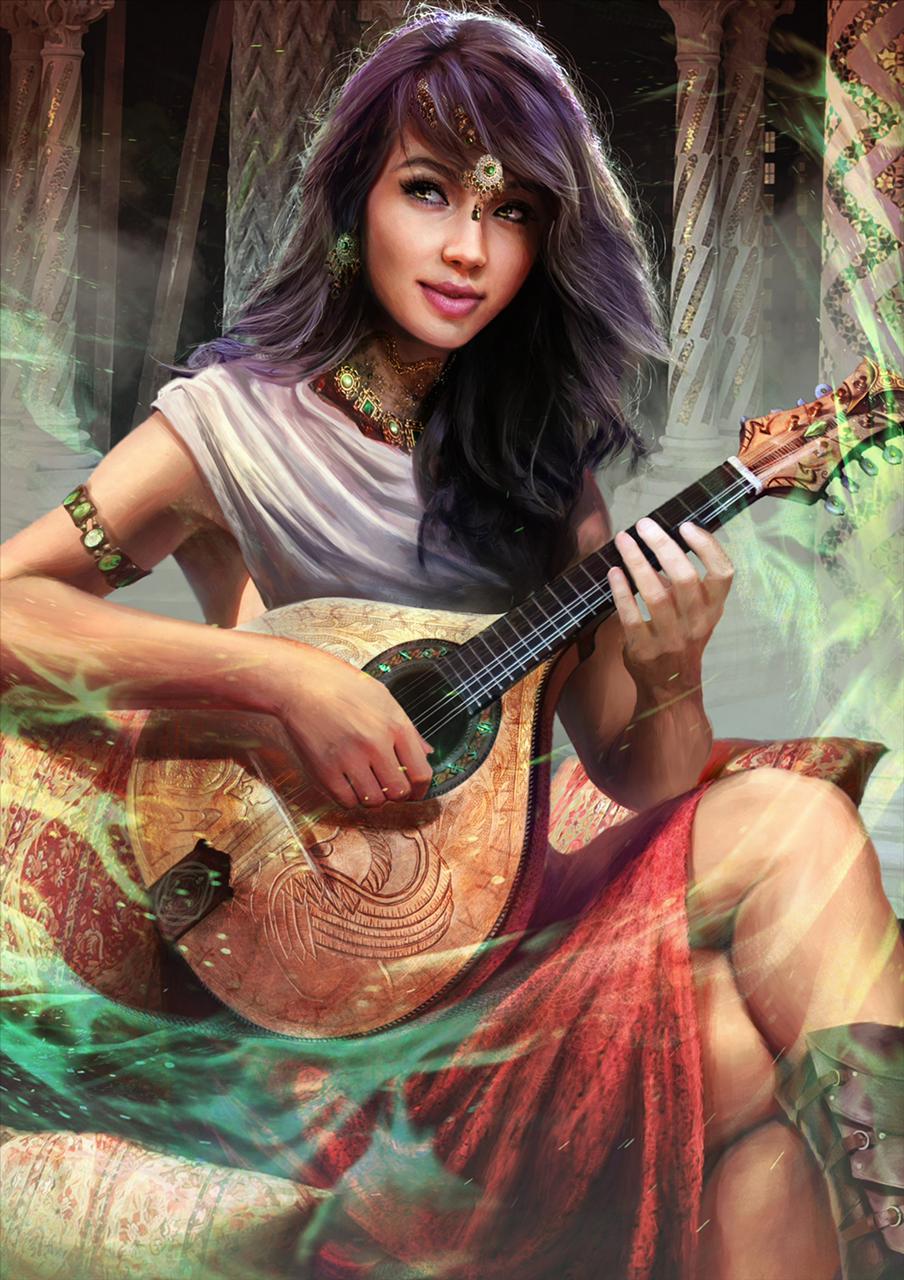 The kind folks at Dragori Games have shared with us (minisgallery.com) the 3D Image Renders of the painted miniature offerings that are available in this Kickstarter. (Note: the rendered images are not necessarily fully representative of what the final paint job will look like).

You can view these images at:
Here's a preview of 2 of my favorites though: 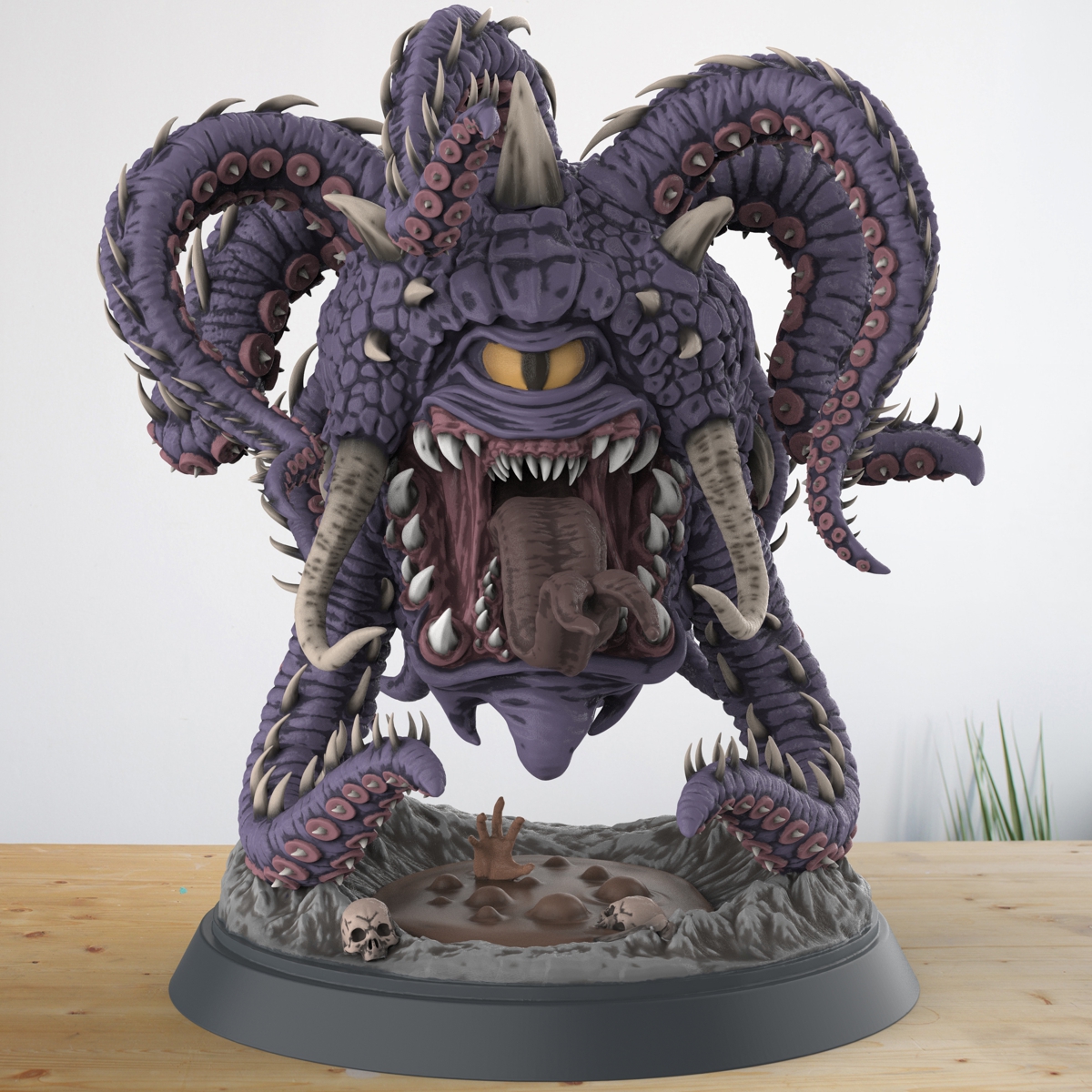 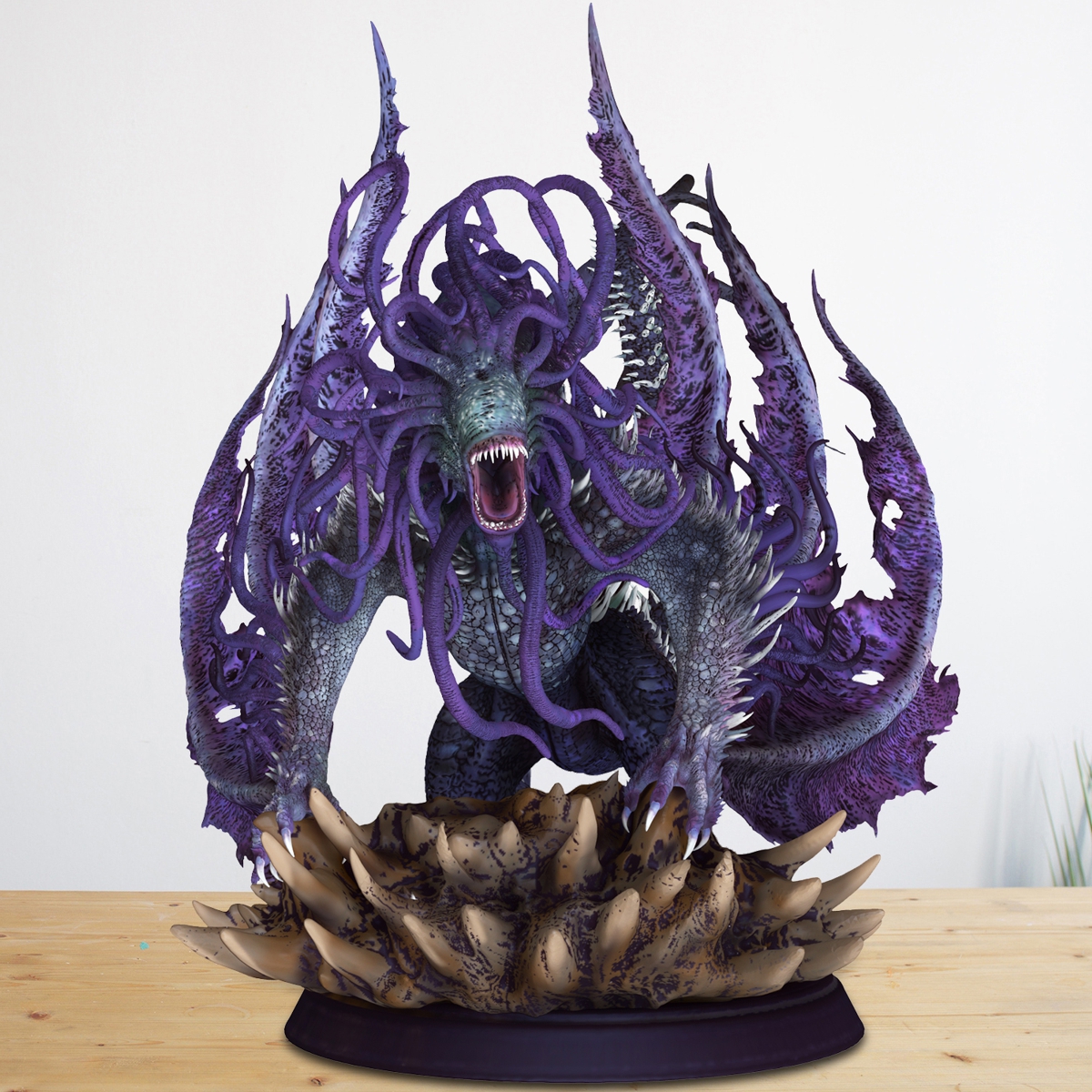 A
D&D 5E An Adventure Path for 5e and Scenario with legends like Ed Greenwood, Rich Redman and many others
2