The Kickstarter is halfway through! Last week we shared the adept with you. Today, it’s the most frequently requested class of them all — the ranger!

With the ranger, our initial surveys showed a lot of interest in a spell-less class. While the Level Up ranger can do fantastic things in the wilderness — think of Aragorn leading Legolas and Gimli as they chased the orcs in The Two Towers — those things are a product of skill, experience, and knowledge. Their abilities may even sometimes look like magic to the uninitiated, but they are not. The Level Up ranger is the undisputed master of the exploration pillar, with exploration knacks and other features which interact with the journey rules and other aspects of the game.

But we know some people like the spellcasting ranger, and so we have included an archetype (subclass) for that, as well as a rule which enables you to use existing spell-casting ranger subclasses with our new version of the class. The Kickstarter is halfway through! Last week we shared the adept with you. Today, it’s the most frequently requested class of them all — the ranger! 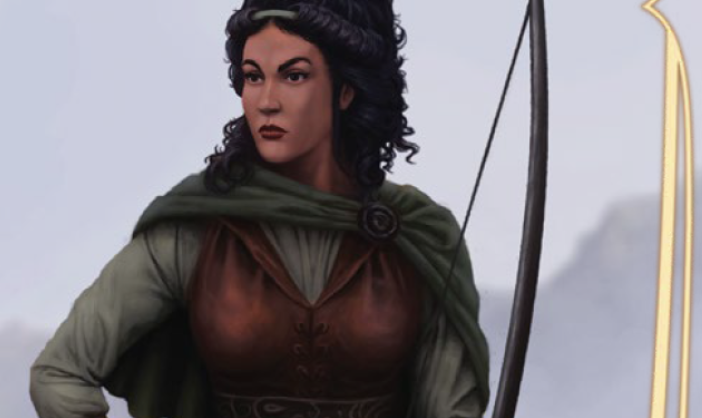 Morrus is the owner of EN World and EN Publishing, creator of the ENnies, creator of the What's OLD is NEW (WOIN), Simply6, and Awfully Cheerful Engine game systems, and co-host of the weekly Morrus' Unofficial Tabletop RPG Talk podcast. He has been a game publisher and RPG community administrator for over 20 years, and has been reporting on D&D news for two decades. He also is on a Twitter.
N

You had to post this just as I'm heading out for the afternoon?!

But seriously, squee! Can't wait to read it.

Mounted combat in Level Up is such fun!

Morrus said:
Mounted combat in Level Up is such fun!
Click to expand...

Wow, this looks great. This is pretty much what I want a ranger to be like. But, of course, things to say:

Gnolls are still humanoids? I hope they got de-demon-background'ed in the MM, then. I felt they were still kinda too demony in the monster playtest. (My actual hope is that "gnolls" is just a mistake brought over from o5e and you fix it to read, I dunno, elves or something.)

Are "game animals" ever really defined anywhere? Does it count if the Narrator says the town of Stoneburg declares that gorgons are game animals in their neck of the world? Or does this ability only work with beasts? If it's the latter, I think you need to say that. If it's up to the Narrator, then hey, that's pretty awesome.

Flash of Steel? Free maneuver, no exertion cost? Awesome! I wonder if any of the other martial classes have something similar.

Can another ranger of sufficient use your hunter's blind without inadvertently ruining it?

For Under the Stars, do you have to spend the remainder of the time in light activity, or can you just get up and go? Is this the "be the annoying morning person who gets up at the crack of dawn and jogs a few miles before breakfast" trait?

Personally, I'd alter Beast Friend so that you can get a CR 1/4 beast at 11th level, or CR 1/2 if you're a Beastmaster (and maybe have a note that Beastmasters can get CR 1 beasts at, say, 17th level). Nevertheless, I love that Beastmasters can give their beasts temp hp and bonuses to attack and damage. I don't think that there should be any issues if you used the Beast of the Air/Sea/Land stats (they have no CR) instead of a regular-issue beast, but what does everyone else think?

I think the Wildborn does a great job of having spellcasting rangers, for those people who really prefer more magical rangers.

All, in all, this is a great class!

Edit: A nitpick: There seems to be an extra space above Waste Not.

I really hope the ranger is just a more damaging fighter. I understand that the fighter may have more options in terms of the manuvers and stuff, but can it beat better hunters mark and extra +1s and stuff. As well as more d6s from the Accuracy Bonus. Its just crazy! Not to mention the saving throw bonuses from subclasses.

Really nice. It uses a lot of ideas that have been suggested or used in other ranger re-write attempts, with a little extra polish. Almost seems like too much stuff, but I realize some of that is multiple choice options, so it's not actually that large for any given ranger.

Only thing that seemed off to me was a couple of the options provided in High Ground: the +5 move speed, and making an area you pass through be difficult terrain, really don't feel like level 19 abilities. I would have expected them to show up at much lower levels.

Firstly, I'm loving it overall! I would definitely play one of these, especially the Warden.

...but is there a reason Beastly Attack (18th) is so much weaker than High Ground? It just seems pretty one sided. High ground has so much, and Beastly Att. just gets an extra non-magical attack from a friendly beast... that's not going to amount to much.

This makes me very very happy, I do like Familiar terrain, the exploration knacks, non-spell Hunters mark and the Beastmasters best friends.
I’m seeing hints of doing a viable Tarzan, which is always my standard for assessing Ranger classes

Quick Nitpick: Trained Accuracy doesn't technically say "choose one of these", but format wise it looks like all of the the others that do say "pick one".

Stalker0 said:
Quick Nitpick: Trained Accuracy doesn't technically say "choose one of these", but format wise it looks like all of the the others that do say "pick one".
Click to expand...

I think you get both—but they should probably specify that.

Finally home and just finished reading it! I love this take on the ranger. It has everything and more I expect of a ranger, so much so that there are difficult choices to make for several features (see below). And to top that off, rangers eventually get to choose knacks from three other classes as well! Talk about a surfeit of options.

Two of the three "core" archetypes are great, very distinct in feel and clearly competent in their area of specialization. The Wildborn is the first spellcasting ranger I would want to play, the non-spellcasting features are just that cool. The Beastmaster doesn't seem to shine as brightly as the other two, and I've got some thoughts about that in the list below. I doubt I would want to play this Beastmaster, which is a disappointment.

Specific comments, including small corrections (I used to be a technical writer so I can't help but point them out):
I could have gushed about more features I think are really cool, but this post is already really long. Great job!

Dammit! I think this is the post that's going to absolutely force me to back Level Up, even as my bank balance breaks down in tears and begs me not to.

It looks like a really cool mostly-spell-less ranger. The only nitpick is the Big Game Traps ability, which seems a bit mundane for a level 12 ability. I mean, not to cross the streams or anything, but I don't think the Ewoks had a significant portion of level 12 rangers among them.

Another very interesting preview! Overall I really like it, but I have several questions and observations:


Exploration Knacks
In general, these are all very flavorful! One question though, is: these rules do not specify any kind of environment? Does this mean that the ranger would be able to use foraging skills even when in Hell, or in the Astral Plane? Some notes about how to handle this for both the player and Narrator would be useful

Archetypes
Beastmaster: I like the idea, but feels subpar wrt the other two.

Warden: nice, wild knight idea. I definitely see an elven patrol working this way.
- Riding out: same observation as Fash of steel. Unlimited usages of a maneuver means that it will be spammed non stop and become like Eldritch blast in o5e. This is more situational than Flash steel, though

Wildborn: basically the original o5e ranger with some additional magical features. Nice. What's really unclear is how does the spellcasting feature work with the text blob at page 224 regarding spellcasting. The blob mentions free 1/day use of each 1st level spell, then free 2 usages a day at level 9. Then at 17th level it talks about a second usage of level 2 spells, but no mention is done for the first usage of level 2 spells (presumably around level 13?). This all requires quite some editing and/or clarifications

Huh? An O5e cleric that goes all-in on healing, even if they don't have the Life domain, can heal 3x (1d8+Wisdom modifier), so in most cases 3d8+9. That's significantly more than 4d4.

But yeah, the ability really doesn't scale well. 1d4 healing for an action at a level as low as 3 is pretty weak.

Staffan said:
Huh? An O5e cleric that goes all-in on healing, even if they don't have the Life domain, can heal 3x (1d8+Wisdom modifier), so in most cases 3d8+9. That's significantly more than 4d4.
Click to expand...

It's a nice feature, the scaling is just off IMO

Staffan said:
But yeah, the ability really doesn't scale well. 1d4 healing for an action at a level as low as 3 is pretty weak.
Click to expand...

Yep. But the fact that it's an action is quite irrelevant for me, as I think this is mostly meant to be a post fight bandage.
The scaling is problematic.

I also just realized that at level 1 a ranger with Wis 16 and Healing Salves can heal more than a 1st level Herald with lay on hands.
Healing for the ranger should be a marginal utility feature, while should be much more prominent for a herald, as the scaling of the features would suggest. But this is not true at the first 2-3 levels (unless of course the herald also burns spells slots for healing)

Level Up (A5E) Rangers, strangers, dangers...The good, the bad and the ugly of LU5E's rangers.

Level Up (A5E) My first Level Up game