Liches: Dance Macabre is an RPG supplement. It is about liches – naturally – and is for Pathfinder and 5E D&D. I will be launching a Kickstarter for it in a few weeks and would appreciate your support.


Everyone hates liches – the Sorrow Lords – more than vampires, dragons, and demons. They are sentient, free-willed open wounds in reality who corrupt everything they touch. But, a lich that never leaves its crypt is not as frightening as one that goes soul hunting. A lich that never looks up from its magical work is not as useful as one that hunts the player characters. 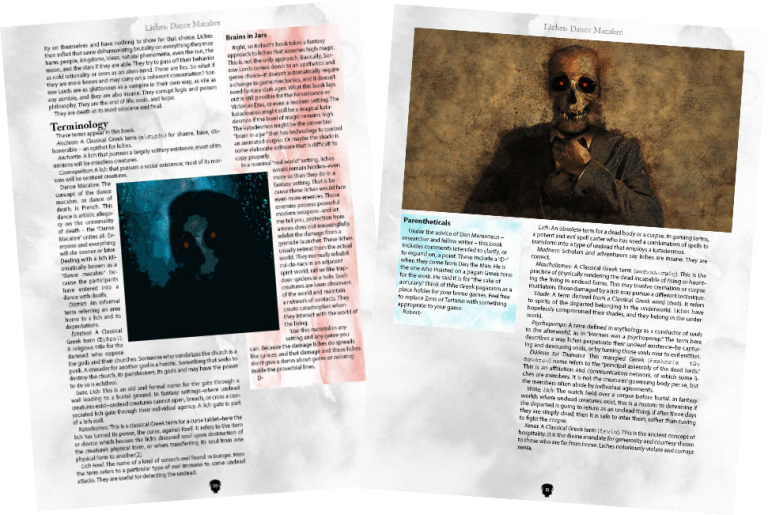 The purpose of this book is to expose a lich on many levels: its magic, its mind, its goals. In so doing, liches should become a flexible tool for GMs. Also, the player characters may become better prepared to deal with them. 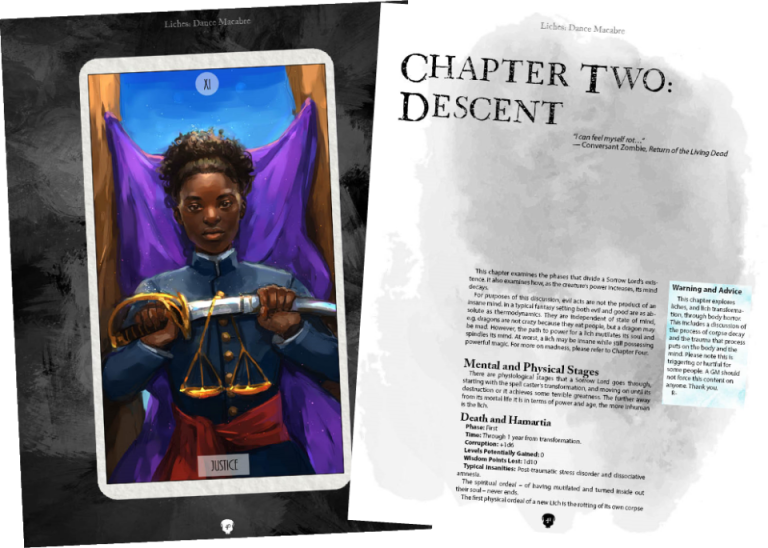 Liches are a staple of many RPGs, and even pop culture. But, they are also a recent creation of RPGs and pop culture. That is to say, they are not rooted in folklore in the same way as vampires, goblins or dragons. 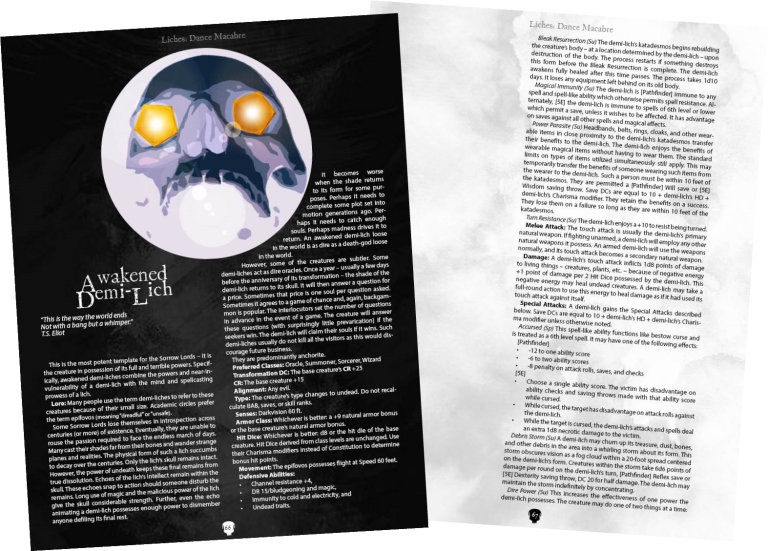 Liches: Dance Macabre gives GMs tools for adding lich folklore in a game, to add texture to the campaign.

So, yeah, this Kickstarter is to generate funds for the art for Liches: Dance Macabre. Thank you.

Which edition of Pathfinder?

Is this book dual-statted or are there separate Pathfinder and 5E versions?

2nd Edition Pathfinder.
And it is one book with dual stats. Which system is indicated with boxed text. For example; "Skills: [Pathfinder] Craft 5, Knowledge (arcana) or (religion) 10; Spellcraft 10. [5E] Arcana 10 or Religion 10."

Some art from the book; 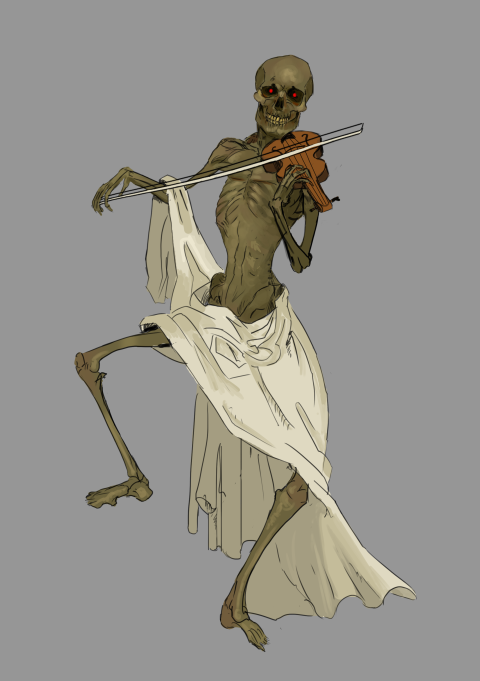 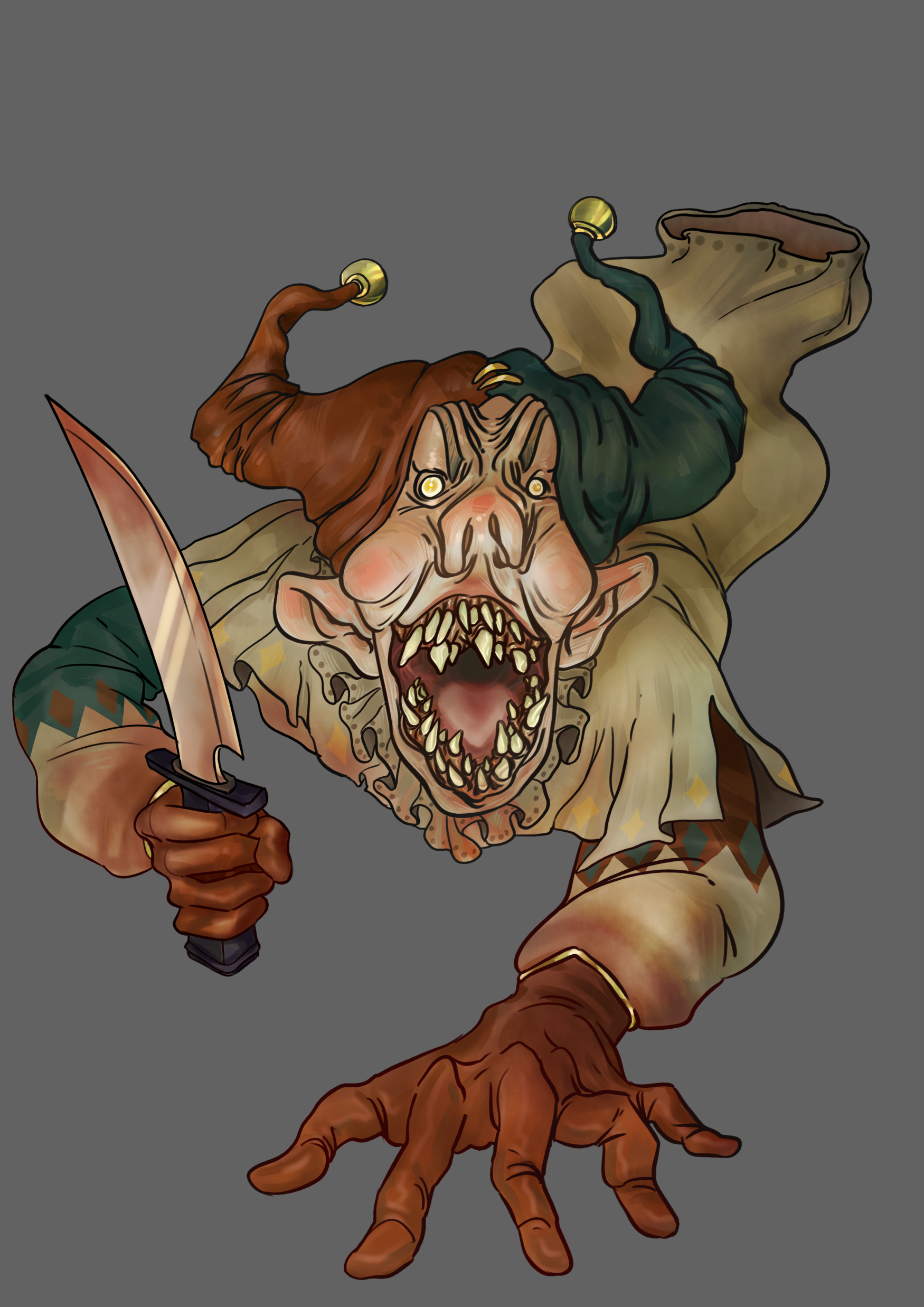 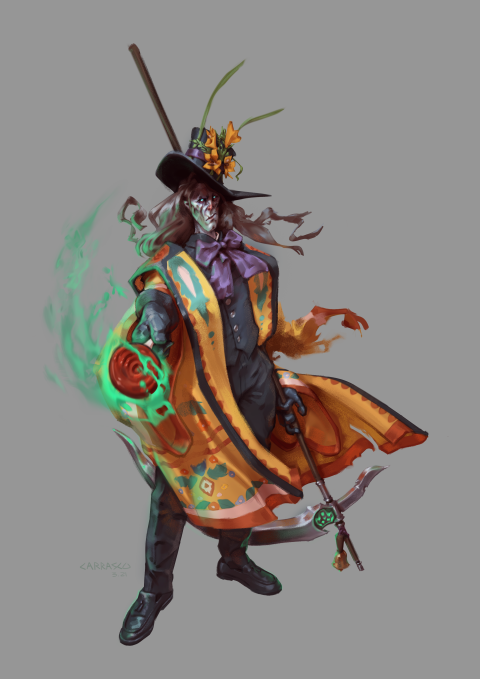 The table of contents as a sample page; 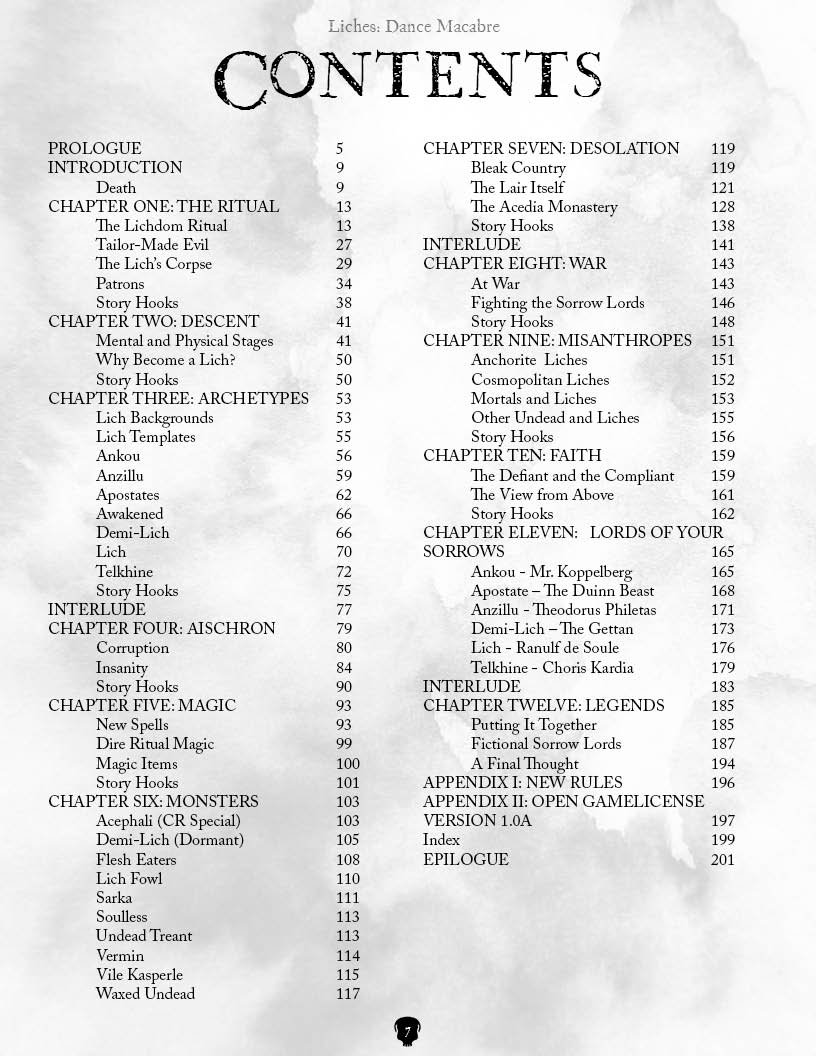 Thanks. The book has a theme, or reoccurring leitmotif, of the darker parts of ancient Greek paganism. I tried to keep this consistent with the names and terminology. 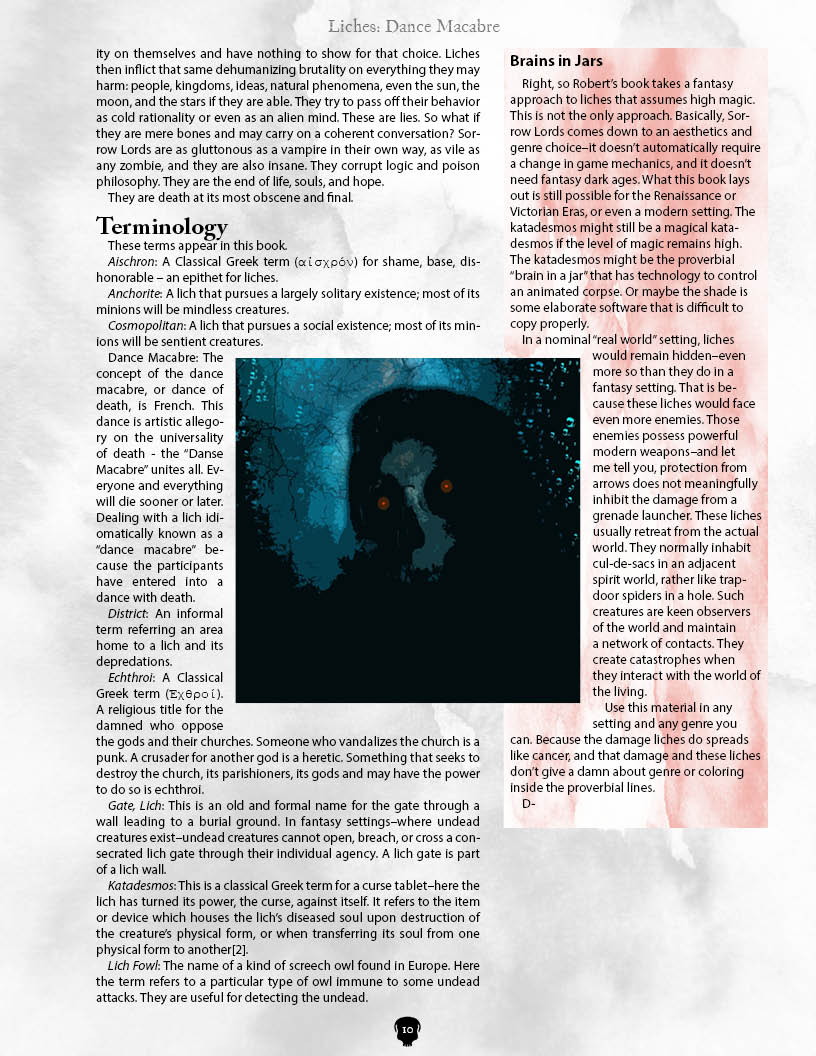 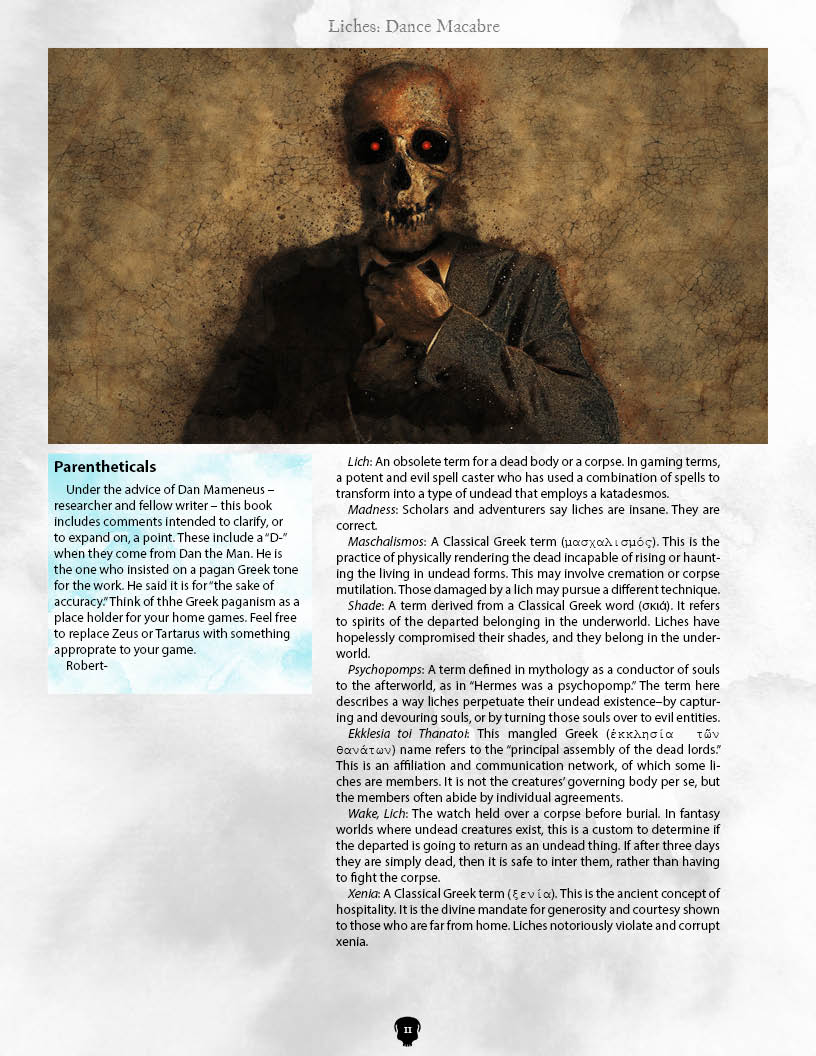 A list of expanded lich powers, which will be appearing in the book. 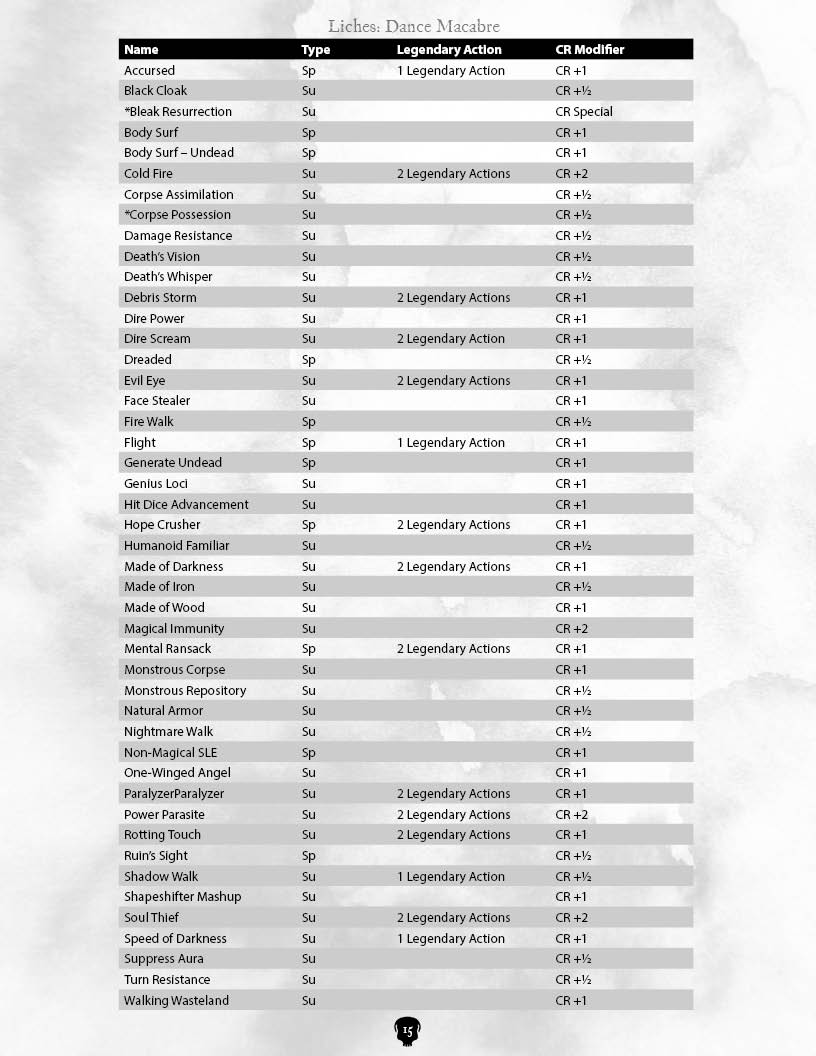 so no Baelonorn? Do you have room for Good aligned Liches?

Also any Evil Sultans with their Hearts hidden in forbidding towers protected by giant fists of doom?

Koschei the Undying, from Russian folklore, you sometimes see mentioned as the original literary inspiration. He was a long-lived sorceror who would hide his soul in some nested object so he couldn't be killed (a needle in an egg in a duck in a hare in a chest buried on an island, for instance).

No baelonorns, as they are not part of the open game material. Like the beholders and mindflayeers, they are solely the IP of WotC. However, I do discuss elves as liches.

There is a discussion of "good" liches, and thee creatures are rare and tragic.

I reference some folklore stories about people who removed their hearts (or spirit, or capacity for death) from themselves and hid these items.

I expressly discuss Koschei the Undying in the book.

Liches as PCs are possible, and something I explore in the book. They are some challenges to playing a lich. For one, liches tend to evil, and so what kind of campaign could you run a lich? Also, they tend to be powerful, so what is the power level of the campaign? 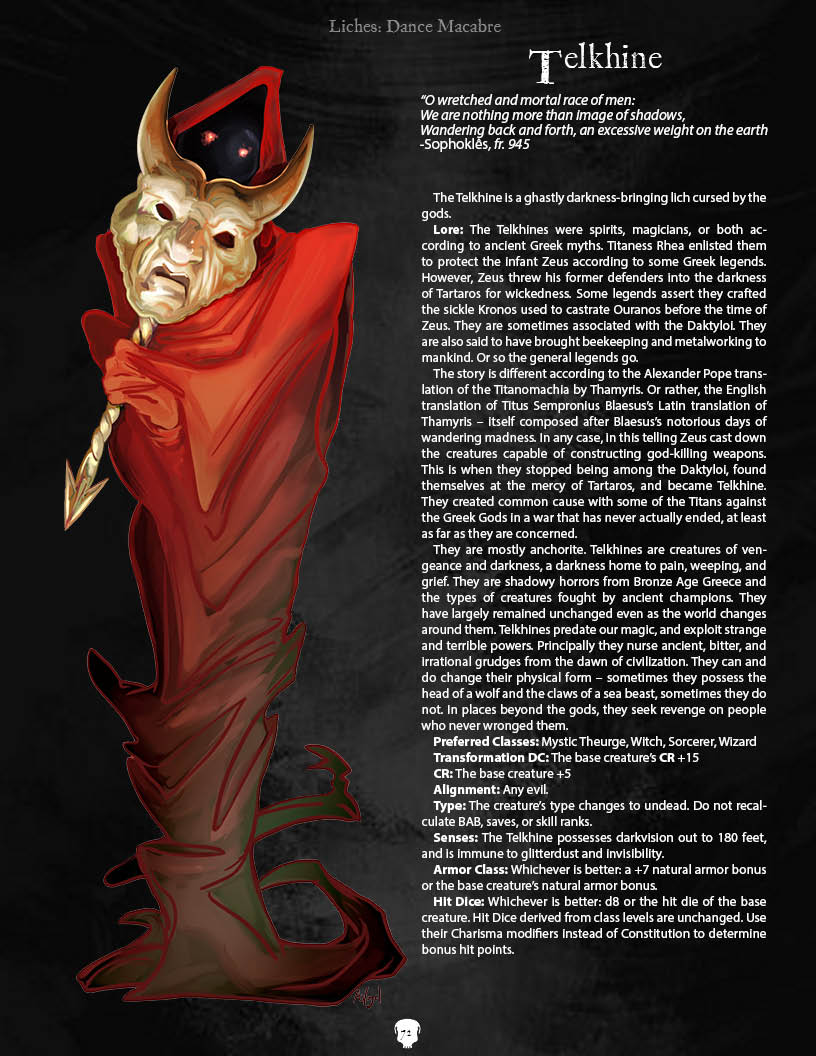 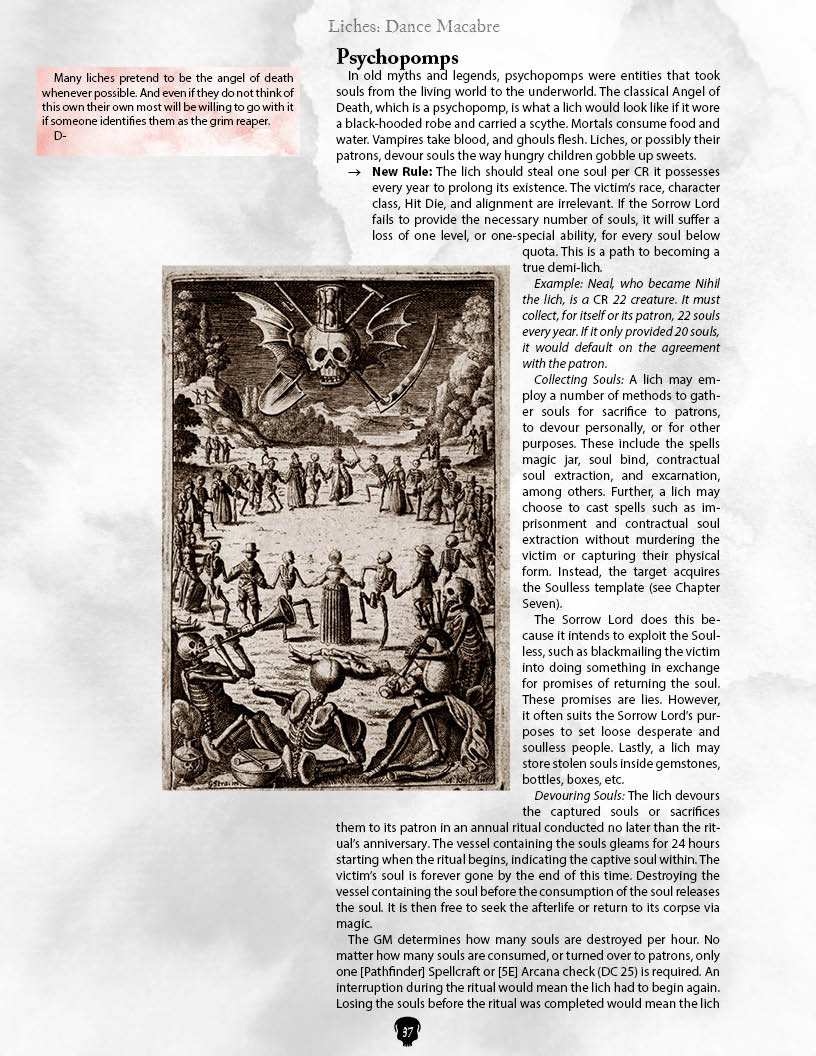 Thanks - there is ever so much more in the book.

Coming Hypostasis, a game of Abrahamic Horror, Survival and the Inevitable Passage of Time