Paul "Wiggy" Wade-Williams, co-founder of Triple Ace Games, kindly responded to my request for an interview. He has authored several books for Savage Worlds Hellfrost and Ubiquity Leagues of Adventure. 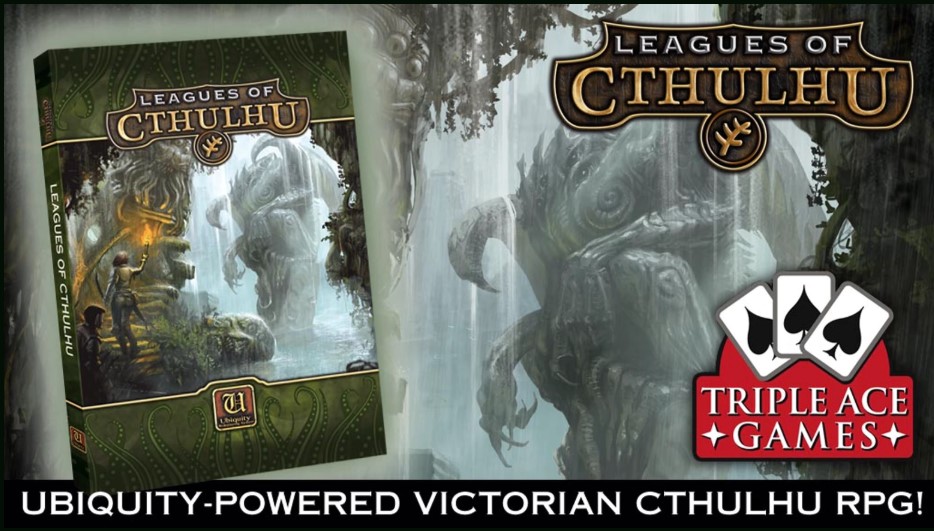 Charlie Dunwoody (CD): What RPGs do you play and what are some of your favorites?
Paul "Wiggy" Wade-Williams (WW): In between playtesting something new from Triple Ace Games we’re playing The One Ring, published by our friends at Cubicle 7. Aside from some one-shots, TOR is all we’ve been playing for the last few years. I have a fair few favorite RPGs, but Golden Heroes tops the list. I’m not sure if it ever reached the USA, but it’s a 1980s superhero game published by Games Workshop. Some of the rules are a little clunky by modern standards, but it has definitely stood the test of time and we still play it on occasion. Other favorites include RuneQuest, Traveller, and D&D. I know they’re pretty much the original big names in RPGs, but I’ve always had a soft spot for them, regardless of edition.

CD: What is your RPG design background and what is your favorite RPG work you’ve created?
WW: I don’t have any qualifications or professional training regarding writing, layout, or publishing. I sent a proposal to Atlas Games in the late 1990s and got lucky when they accepted it and asked me to write a book. I’ve always said I’m a gamer who got lucky and I stick by that, despite being a writer for over 20 years and co-owner of a games company. As for my favorite RPG work, I have two answers. First, Hellfrost (Savage Worlds fantasy setting). Partly that’s because it was just so much fun to write and partly because it has been such a hit with the fans. You obviously hope everything you write will appeal. The setting is ten years old now and still selling, so I obviously got something right. Second would be Leagues of Cthulhu (part of the Leagues of Adventure line) Cthulhu has become part of pop culture today and there are a lot of RPGs bearing his name, but I always wanted to add my own thoughts to the Mythos. 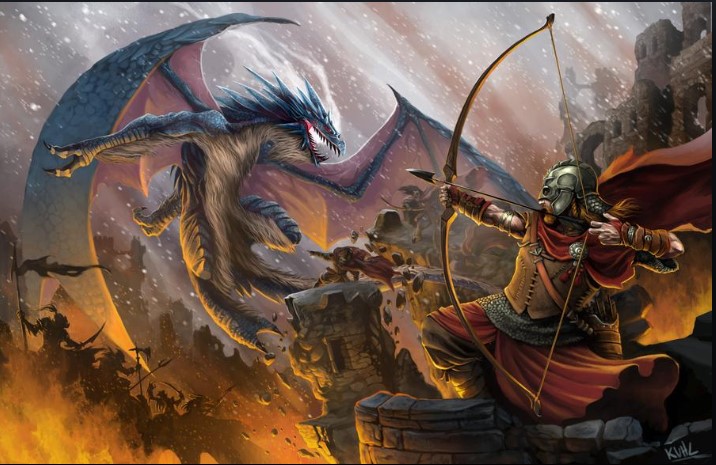 CD: What is the history behind Triple Ace Games and what part do you play in it?
WW: Triple Ace Games was formed back in June 2008 by three people – myself, Robin Elliott, and Dave Blewer – hence the “Triple” part of the company name. We already knew each from our time working with Pinnacle Entertainment, me as a staff writer, Dave as a freelancer, and Rob doing graphic design and layout. Keen to do our own thing, we moved on from PEG to become masters of our own destiny. Back then I was the only full-time employee - Dave worked on a freelance basis and Robin was involved in the publishing trade. Dave sadly had to depart a few years in and Rob joined the company full-time back in 2013. When we started publishing card games, me and Rob decided to separate our generic titles. So Rob became Director of Tabletop Games and I became Director of RPGs. There’s a lot of crossover still, but essentially I write all the RPG material, lay it out, commission artists, arrange editing, fix the edits, and get things ready for publication.

CD: When you work on an RPG what matters the most to you? What do you want to make sure is included? Story, solid mechanics, art, layout etc.?
WW: Definitely the story, or fluff as it’s often called. As a gamer, I can move a setting to a different system if I dislike the mechanics, and art is great for inspiring new ideas, but if the setting itself sucks then it’s time to find another game to play. As licensees for Savage Worlds and Ubiquity we don’t get to create the core game mechanics, so aim to create the best settings we can. Whether fans like it not I don’t know, but I like to add in throwaway comments for the GM to work with as they want, rather than spell everything out in black and white. An example would be something like, “The mansion has remained vacant for decades after the last four previous owners all committed suicide.” Even when writing it I have no ideas in my head about what led to the suicides, but it’s unlikely to be random chance. Something happened and the GM can work with that kernel of knowledge to create an adventure.

CD: You recently kickstarted the Monster Guide Bundle. Did that go well and are you currently working on any other RPGs?
WW: It did, but it was never intended to be a huge project. We’d already published five monster guides for Leagues of Gothic Horror and the latest Kickstarter was just to make sure the final three got published in a timely fashion. Thanks to the backers those will be published soon – we’re just waiting on the final art and editing. We’re always working on new projects. Right now we’re working on more Leagues material, with a forthcoming Leagues of Cthulhu book on Afghanistan in the late Victorian Era, and on building a Kickstarter for Hellfrost 2nd Edition. There are other projects in various stages of development, but we’re not ready to go public with them at this time I’m afraid.

CD: Most readers of EN World are D&D players. What would you say if they asked why should they should try one of your RPGs?
WW: Although Hellfrost is written for Savage Worlds, the actual setting – a magical Ice Age slowly freezing the land – can be converted to any rules set. Many of our fans have played or still play D&D, and we’ve received several comments that Hellfrost is up there with both Greyhawk and Forgotten Realms in terms of the quality of the setting material. This is pretty much a sales plug, but any D&D players who want to explore the Hellfrost setting can grab nearly 1,000 pages of material for $30 through our TAG@Ten Savage Worlds bundle on DriveThruRPG.

CD: Your RPGs use Savage Worlds and Ubiquity. Do you use other RPG systems as well? Ubiquity is a unique cinematic pulp system, what about that system works so well for Victorian steampunk and gothic horror?
WW: We only use Savage Worlds and Ubiquity at the present. When we were designing Leagues we wanted it be more about exploration and investigation than fighting bad guys. The Ubiquity Skill list is quite long and varied, but that allows you to create a wide variety of characters without stepping on anyone else’s toes. Among the sample characters I’ve created are museum curators, ship captains, missionaries, anglers, and even a Shakespearean actor. Sure, you can create those sorts of characters in many game systems (I once used the rogue class to create a dwarven sewer cleaner in D&D), but Ubiquity just does it better in my opinion. I think I’ve mentioned the Ubiquity Resource system in every interview I’ve done, and I won’t disappoint now. Essentially, Resources allow you to have allies, followers, a patron, a house, a military rank, and even fame even at character generation, all with specific game mechanics. They also expand the opportunities for roleplaying. Sure, having a Contact grants you a dice bonus in specific areas, but talking to the Contact is a chance for a player to get into character.

CD: Any final comments you’d like to share with the readers of EN World?
WW: Thank you for taking the time to read this and may all your dice roll crits!
Click to expand...

Paul does good stuff! Even if I don't do Savage Worlds, I check out what Triple Ace is doing.

Any chance you'll eventually translate the whole Leagues Of Adventure stuff to the new Savage Worlds Adventure edition? Sure, SW has Rippers already, but Leagues is a more generic and adaptable base.

Hellfrost is amazeballs. Running a game in it currently.

I have the Hellfrost books. They were very inspiring when I was running Savage Worlds. A game I hope to soon return to.

I'm a big fan of the Ubiquity rpg mechanics system. Not so much a fan of the fact that finding the dice that makes playing it much easier is impossible these days. I'm talking about the white/red/blue dice, not the hard to read Modiphius Space 1889 versions. (sigh)

Anyhow good interview, I hadn't heard of the Leagues of Cthulhu book, but definitely will look into snagging it once I've taken care of all of my recent Kickstarter rpg backed purchases. Otherwise my wife might disown me if I spend yet more this month on yet another rpg.

I had the chance to meet Wiggy two years ago at the SPIEL fair in Essen, Germany. We chatted for a bit, he’s a really nice guy. Missed TAG last year at the fair (met some folks from Cubicle 7 instead), so I do hope they‘ll attend again sometime soon.

I you like Savage Worlds, check out Sundered Skies and Hellfrost, two very unique fantasy settings.

Hellfrost is my first foray into Savage Worlds Fantasy as a player and I have to say I am loving the Dark Ages. I have been capturing the exploits of my group every week in our Hellfrost Session Reports and everyone round the table is having a cracking time.