I have made a pdf of both the following rules and an example chase. The pdf also includes simple chase rules, which are not covered in this thread. This was getting very long already, so they are not covered here.

Chase Rules: How to Run Chase Encounters by Green DM

There are rules for chases in the Dungeon Masters Guide Starting on page 252. They go over how to begin a chase, how to run a chase, how to end a chase, and how to complicate a chase to make it more interesting. These rules are a little bare and you need some considerations when using them.

Most chases will begin when a creature, known as the quarry, tries to run away from another creature known as the pursuer. Importantly, the quarry’s location is known by the pursuer when the chase starts, otherwise it is not a chase, it is a search. A quarry may also be trying to run to a safe haven, which can protect them from the pursuer. Not all chases have one.

An obvious example of a chase is when a monster tries to flee combat, but a player character follows it, in hopes of landing a final blow. This is a much different situation than if a player character is invisible, makes a bunch of noise, and guards start looking for them.

Setting up a chase​

Chases, much like combat, have some required setup before they can start running.

You may choose a different check to act as the chase initiative roll for your game. An athletics check is simply what makes the most sense to me.

While everyone rolls their chase initiative, you may think to draw a map for the chase. But this can quickly become a headache for you, due to most maps being the size of rooms, or a single city block, not a football field that a chase might need. Here I recommend what the DMG recommends, tracking the distance between the quarry and pursuer, but I think you need more than that. So instead of a map, you should draw a number line. Ohh yeah. A line with numbers on it. 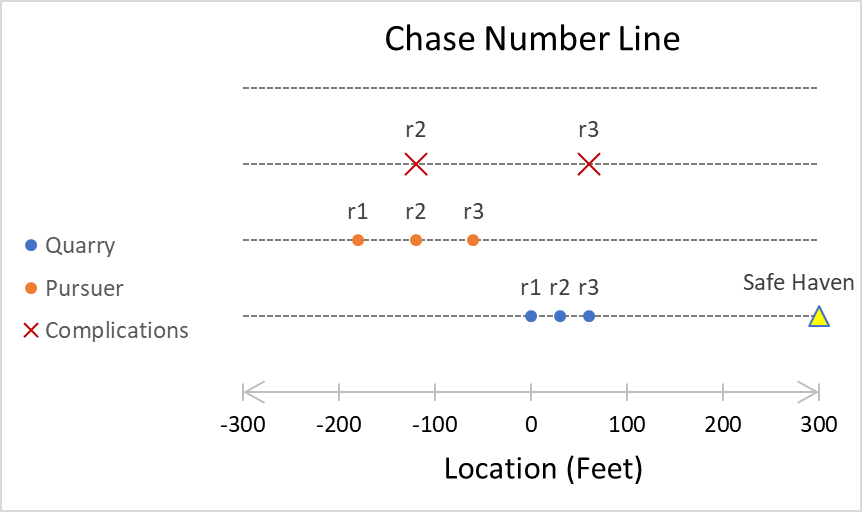 This way you can easily track how close the quarry and pursuers are to each other, as well as a bunch of other information, like how close the quarry is to its safe haven, if it has one, and where complications have arisen along the chase route. I’ll explain those in more detail later, but the line should start with the quarry at 0, the pursuers at however many feet behind the quarry they are, and if applicable, how far ahead the quarry’s safe haven is. This, along with knowing how fast the movement speeds of the quarry and pursuers are, will give you a rough estimate how many rounds this chase can last.

Alright, a chase initiative, based on athletics, has been rolled, the distance between the quarry and pursuers is set, and possibly the quarry’s safe haven is in sight. Let’s move on to running the turn by turn action!

Once the chase starts you could just run it like a combat, but I think it needs one big change.

In combat, it is fine for a character to run up to a wolf, hit it with an attack, and then for the wolf on its turn to move 30 feet away. But when everyone is running in the same direction, you don't want people getting super close together on one turn, then super far apart on the next, all while moving at the same pace. It doesn’t feel right and can mess up a lot of the ranged based effects like spells and weapon attacks. Instead, chase participants can act as normal on their turn, but cannot move until the end of the round. Then at the end of the round all chase participants move forward their full movement speed simultaneously! This stops characters from rubber banding like in a glitchy video game turn to turn. Spells similar to teleport, such as misty step, can be resolved on the turn they were cast, instead of at the end of the round, due to them being instantaneous movement.

If a chase participant takes the dash action on their turn, that movement will be included in their end of round movement. But they cant' dash forever. Taken from the DMG:

During the chase, a participant can freely use the Dash action a number of times equal to 3 + its Constitution modifier. Each additional Dash action it takes during the chase requires the creature to succeed on a DC 10 Constitution check at the end of its turn or gain one level of exhaustion.
Click to expand...

Without complications, a chase is just a bunch of people, in order, running. A complication is an obstacle that arises during the chase that needs to be overcome.

The quarry can use their action to make a complication for the pursuer at their current location, such as knocking over a cart of pots or releasing caged animals. It is up to you as the DM to decide, what is required to overcome this complication and what the consequences of failing to overcome it are. Some example effects are:

There are at least five ways a chase can end. At least that I can think of.

The first 3 of these are pretty straight forward, so I will focus on the last two.

If you had a safe haven for the quarry laid out from the beginning of the chase, reaching it will most likely mean they are safe and the chase is over. That does not mean they are safe forever, just the moment. Ducking into a gang hideout doesn’t mean the pursuers can never catch the quarry, it just means they now have a mini dungeon to explore. The chase is over, but perhaps a combat or exploration encounter begins.

As for the quarry escaping by slipping into hiding, it’s a gamble. Instead of running for a turn, they need to use their movement and action to try to hide. This check automatically fails if they are in sight of the lead pursuer. A Dexterity (Stealth) check can work for this, but if the quarry is trying to blend into a crowd, a Charisma (Stealth) check is a good alternative. That check is then compared to the passive Wisdom (Perception) of the lead pursuer, or several pursuers if they are all close to the lead pursuer. Again, even if the quarry successfully hides, that does not mean the pursuers give up completely. It just means the chase is over. A skill challenge may start, where the quarry tries to find a good place to bunker down until the pursuers give up their search.

The Quarry is Captured​

If the pursuer can get close enough to the quarry to grapple them, cast the hold person spell, or reduce their speed to 0 in some way, the quarry is captured. A struggle might commence, and the quarry might get free. This would start another chase, though one that will most likely be much shorter.

And that is how I would run a chase. I have rules for simple chases too, but this is getting very long. Feel free to check out the links to get a better idea of how to set up a number line and an example chase!