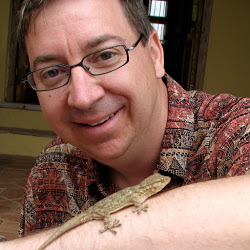 One of the architects of D&D’s Third Edition, an early force behind the rise of RPG ebooks, and the author of hundreds of well-loved games and supplements, Monte Cook is one of the best-known designers in tabletop RPGs today. Numenera, the first release from Monte Cook Games, hit the ground running with a wildly successful Kickstarter campaign last year, and will be released in August.

So how does a writer of Monte’s caliber take his business to the next level? By bringing on board one of the industry’s top business leaders. As of this week, Monte Cook Games is pleased to announce the addition of Charles M. Ryan to the company’s management. A 20-year veteran of the industry, Charles is perhaps best known as the Brand Manager for D&D during the peak Third Edition years, where he helped shape the brand’s revitalization and drove substantial growth.

“We’re really excited to have Charles on board,” Monte commented. “Numenera is going to do great things, not just on its own but also with some of the key licenses coming out of it, like the Torment: Tides of Numenera CRPG. But to really make the most of it, we need someone on the team who can bring the same experience and talent to the business side as we bring to the game design side.” Monte Cook Games co-owner and Numenera lead editor Shanna Germain added, “And perhaps just as important, we want someone who's as passionate about games as we are.”

Charles, himself an experienced game designer with credits in over 100 products, will focus on building Monte Cook Games into one of the top RPG publishers. “My job is to match Monte’s innovative, high-quality, visionary game design with equally creative approaches to our marketing, production, and operations. We’re not just going to publish the greatest, most evocative and attractive RPGs—we’re going to make the most of them with one of the best-managed organizations in the industry.” Charles’s addition to the company enables a more aggressive release schedule, a continued focus on innovation and top-notch production values, further licenses for the already-powerful Numenera brand, and additional major releases.

Monte Cook entered the game industry in 1998, and has worked for Iron Crown Enterprises, TSR, and Wizards of the Coast, where he was co-designer of D&D’s Third Edition. He left WotC in 2001 to form Malhavoc Press and later Monte Cook Games.

Key credits from his storied career include Planescape, the 3E Dungeon Master’s Guide, Return to the Temple of Elemental Evil, The Book of Eldritch Might, Monte Cook’s Arcana Evolved, and the ground-breaking Ptolus, but he’s also known as a great RPG innovator—one of the early pioneers of PDF publishing and the creator of dungeonaday.com. He has been honored with numerous ENnie Awards, Origins Awards, Pen & Paper Fan awards, and the Nigel D. Findley Memorial Award. He returned briefly to Wizards of the Coast as the original lead designer for D&D Next.

With over 20 years in the games industry, Charles M. Ryan has created or contributed to nearly every class of tabletop game—board games, card games, trading card games, miniature games, and roleplaying games—and he’s garnered awards and recognition for game design, editing and development, fiction, and graphic design. As a businessman, he’s worked in every tier of the market, from running his own independent publishing firm, to serving as Hasbro’s global brand manager for Dungeons & Dragons, to heading up marketing at the UK’s Esdevium Games, one of the world’s largest game distributors. Charles served as Chairman of the Academy of Adventure Gaming Arts & Design, the professional organization of the games industry, from 1997 through 2001. His recent novel, The Mason of New Orleans, has been highly reviewed.

Monte Cook Games was formed in 2012 by Monte Cook and Shanna Germain, with the aim of revitalizing fan passion for RPGs through high-quality, innovative releases. The first Monte Cook Games product, Numenera, releases in August of 2013.

Numenera is the forthcoming RPG from Monte Cook Games. In this science fantasy game set in the far future, humanity lives amid the remnants of eight great civilizations that have risen and fallen on Earth—the Ninth World. Numenera releases in August 2013, as a gorgeous 416-page hardcover. The Numenera Players Guide and several other products will release simultaneously, including a deck-building game from AEG and other licensed products. The Torment: Tides of Numenera CRPG, from inXile (itself funded by a Kickstarter campaign that topped $4 million), is a successor to the famous Planescape: Torment computer game and will release in early 2015.

Morrus is the owner of EN World and EN Publishing, creator of the ENnies, creator of the What's OLD is NEW (WOIN), Simply6, and Awfully Cheerful Engine game systems, and co-host of the weekly Morrus' Unofficial Tabletop RPG Talk podcast. He has been a game publisher and RPG community administrator for over 20 years, and has been reporting on D&D news for two decades. He also is on a Twitter.
A


I totally agree with your enthusiastic congratulations to [MENTION=5265]CharlesRyan[/MENTION] on his new gig!

(And highly-reviewed means reviewed many times and reviewed well! http://www.amazon.com/dp/B00AMJMCTQ)

Congrats to Charles and Monte and all involved. Great move!

Good to see Monte Cook's company be so successful he needs a COO.

Congrats , can't wait to get my hands on Numenera.