Spelljammer My Five Favorite Things From Spelljammer: Adventures In Space 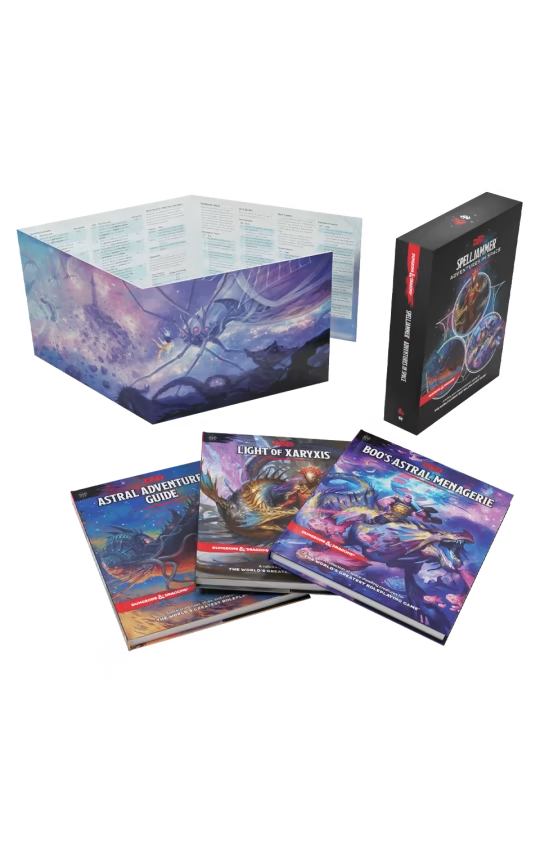 The latest Dungeons & Dragons setting is upon us. Review copies of Spelljammer: Adventures In Space hit my front door, giving me something to page through during the dog days of August. I wanted to discuss some of the things I really enjoyed in the book(s) while trying to stay spoiler free as possible. If you want to see some things before the general release on August 16th, here are five things that I really loved from this slipcase set.

I know some folks are upset at the three book slipcase and claim that it’s a price increase without being officially called a price increase. I’ll leave that discussion for the comments, but I really like the split between player material, monsters and the adventure. It’s the first time in years I’ve felt that sense of discovery of opening up a Dungeons & Dragons boxed set and deciding what parts I want to digest first. I think there’s still space for the one book setup that’s carried this edition through the past few years, but I wouldn’t mind this approach for future settings.


I Am Immortal, I Have Inside Me Blood Of Stars​

There are a lot of player options in this set, from autognomes to the firearm-centric giff, but my favorite one is a background. The astral drifter background makes your character effectively immortal, having spent centuries on the Astral Sea which slows aging to a crawl. There’s a lot of fun to be had playing a character like this, from surprising enemies and allies to having trouble adjusting to “modern” technologies. Both backgrounds also continue a trend that might show one of the revisions in the upcoming core set: they each give out a free feat tied to the background.

The best part of the original boxed set were the cards that detailed the various ships that cruised Wildspace. The Astral Adventurer's Guide details 16 ships of various sizes, giving each a big two-page spread. The first page includes art depicting the ship, its stats and a little bit about any special feature or what crews prefer to sail it. The second page offers the layout in the ship and where the gravity planes are. I know there are going to be a ton of ships out once Spelljammer comes to Dungeon Master’s Guild, but I wouldn’t mind a card collection featuring the art on one side and the deck on the other.

Boo’s Astral Menagerie contains a lot of weird creatures, from murder comets to space clowns. You can see those previewed elsewhere but what caught my eye was the entry in the Astral encounters for ships. Each small crew feels like a story waiting to be told by encountering your players. Why does that ship of vampirates have a priest on board? How did that human captain get a cambion daughter? What is a renegade mind flayer arcanist doing with a ship? All of these are tight little story hooks that might get overlooked otherwise.

This is technically a spoiler for Light of Xaryxis so if you want to stay fresh for your read through, stop reading now.

I mean, technically, it’s a vampire star, but it’s a plot device right out of the Flash Gordon serials that inspired this setting. Not to mention, the players are helping a princess battle an evil empire run by a relative. The adventure wears its inspirations on its sleeve but that’s okay. It makes for a solid selection of movies to watch the night everybody makes characters.

Spelljammer: Adventures In Space released on August 16th in regular and limited edition versions. I highly recommend the limited editions if you can afford them. Hydro74’s art style is the perfect fit for Spelljammer.
Click to expand...

I am a game designer with over 15 years worth of game credits and industry experience. My work includes licensed games based on worlds like Star Wars, Star Trek and Firefly, classic game worlds like Dungeons & Dragons and Shadowrun and my own creations like Camelot Trigger and Save Game. I play a wide variety of games as part of Theatre of the Mind Players and have been the guest of honor at several conventions. I live with my family in Wisconsin, born near the heart of RPGs (and just a few short years younger than they are).
D

Olgar Shiverstone said:
Hamsters on shoulders and hippos on 'jammers
Bright shiny crystals and thri-kreen with hammers
Nasty githyanki with magical rings
These are a few of my Spelljammer things

Very clever... I am impressed with your lyrical adaptation!