The Known World (which later became Mystara) from the BECMI editions of D&D from 1983-90 started as Tom Moldvay’s and Lawrence Schick’s own campaign which ran from about 1976-1979. Bill Wilkerson, a player of those games saved the Moldvay-era OD&D house rules from then, as well as his own overview of the Imirrhosian Continent, which have been scanned and formatted into OD&D booklets by Designers & Dragons author Shannon Appelcline.

You can find them on this Google drive link in the form of 8 PDFs. There's more information about the contents in this thread at The Piazza. 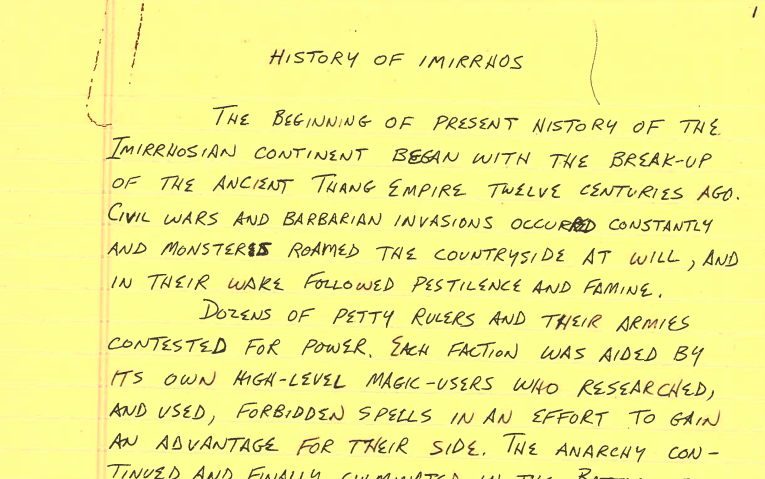 These documents were in Bill Wilkerson's folder:

-Photocopies of Moldvay's & Schick's OD&D house rules. We scanned them in three batches, which I here arbitrarily designate A, B, and C.

-Tom Moldvay's character sheet for one of his PCs: Moirgighan, a human female Fighter / Magic-User. As far as I recall, this is an original (not photocopied) document, featuring Tom's own ballpoint-pen hand-writing.

-"The Quest for the Sacred Sceptre" adventure. Bill Wilkerson's submission to one of the early Dungeon Design Contests held by DRAGON magazine. Set in the Kingdom of Talinor. The adventure was not selected, and the contest rules stipulated that the submissions become property of TSR. Bill wonders how the dating of his Spider Queen design relates to the dating and development of Lolth, and whether he based his Spider Queen on Lolth, or vice versa. (I looked up the International Dungeon Design Contest (IDDC): the first contest posted the list of winners in DRAGON #32 December 1979 (it says the judging took two months longer than planned); and the start of the second contest (IDDC II) was announced in DRAGON#36 April 1980. Any experts in Lolth are welcome to chime in.)
Last edited by a moderator: Jan 21, 2022
Click to expand...

darjr said:
The Known World from BECMI started as Yom Moldvay’s and Lawrence Schick’s own campaign. A fine gentleman, Bull Wilkerson, a player of those games had original documents from then, and now you can too!
Click to expand...

This is awesome, btw!


Don't worry about it! This is an amazing find, and I am so happy to see these rules publicly available!!!!!

Wow. The known world was the original Mos Eisley of PC races.

So many random tables! So many lists!

Daaaaang, this is an incredible find!

My head is just spinning.

darjr said:
from the BECMI editions of D&D
Click to expand...

Tom Moldvay's D&D was B/X and it came out in 1981. Specific, named locations from the Known World are referenced in B/X.

Hey, @Morrus since we have a separate subforum for older D&D editions now, can we also get some tags for the Basic D&D games? Even if it's one Basic D&D tag. Because Holmes Basic, Moldvay & Cook's B/X, and Mentzer's BECMI are not OD&D. The rules are arguably more different than AD&D and AD&D2E and they have separate tags.

Wild. All the non-human PC races. Centaurs and leprechauns. And Kzinti, lizard-, turtle-, and toad-men. The list keeps going and going. Swoon. Man. That would have been so much fun.

So cool.
This seems like it would be something that a certain museum would love to have.

Of course, it makes many players' resistance to using "Homebrew" material even funnier - pretty much everything ever published for D&D has been somebody's Homebrew material. Nothing makes it better than the stuff you, personally, come up with.

Also, whatever happened to the Gray and Rainbow dragons, I wonder?

So many strange and funny things like the Hawk Helm where you have a 5% chance per use that you transform into a hawk and fly away, oder the Boots of Banana Peel where you constantly slip and fall in combat. Or the strange Wrthra, an incompetent Wrait (really bad at attacking) that is immune to magical Weapons but not normal ones.

Wanna play a Banshee, Ogre Magi or even Blarog? These Rules have you Covered.