Release [OSE] Cult in the Empire of Decadence (release & review) 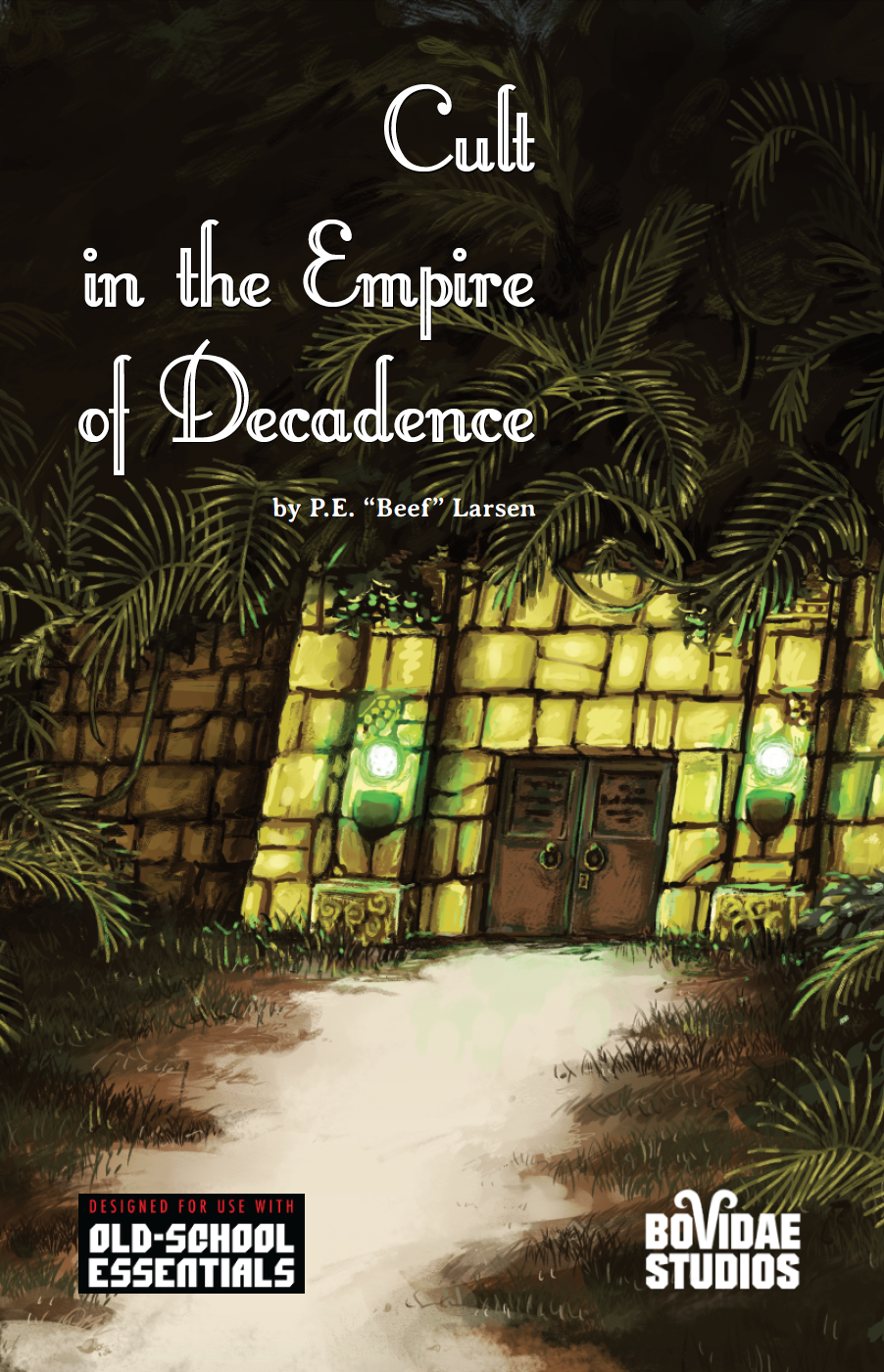 Cult in the Empire of Decadence, a one-shot adventure for Old School Essentials from Bovidae Studios, is out on DrivethruRPG!

Disclosure: I was a playtester (GM) of an early version of this adventure and corresponded with Beef during its creation, however I purchased my own copy and will be as scathing or as complimentary as the work merits.

Tl;dr It's great! 4.5 out of 5 stars, a little wordy for such a short straightforward adventure, but the design choices with duplicated info, isolated map sections, and callouts make it really easy to run. Strong theme of austerity vs. greed. I had a blast running it in the playtest, and would run again with the finished version. If you're into OSE or OSR in general and want a little dungeon to plop into your world or a game for a night, Cult in the Empire of Decadence is a great choice.

Concept ★★★★☆: This is a fun straightforward low-level one-shot adventure (roughly 1st to 3rd - though the module doesn't mention level anywhere). When I ran it, we finished in about 3 hours with a golden TPK. The adventure has two strengths: implied setting & the kobolds. Beef took a "show don't tell" approach to the Cult of Austerity, and in play (and thorough reading) it works really well. The little touches like the coin slots in the doors & coins baked into the bread go a long way – though I would have liked to see even more fleshing out of what the cultists activities & behavior look like. The other brilliant bit are the roving kobold thieves and how they change the dungeon environment as they move about. This is top notch work that elevates what might seem as a throwaway random encounter to a whole other level, and I would love to see more designers embrace this approach to monsters inhabiting dungeons.

Layout & Accessibility ★★★★★: Fully bookmarked, hyperlinked areas within the text, information tends to be on just one page where you need it, light information duplication so the GM doesn't have to search for that one clue, (and speaking of) clue call-outs in relevant sections, sidebars for the kobolds, some nice use of a two-page spread, appropriate amount of white space, bullet-pointing for area descriptions, black/white/grey interior (color blindness friendly), quick reference sheet & dungeon summary sheet... I don't think layout and accessibility gets better than this. It's clear the author put a lot of attention into making the adventure maximally useful for as diverse a spectrum of GMs as possible.

Art & Cartography ★★★★☆: Very simple line art, lots of it quarter-page pieces, makes sense for the "cult in the jungle" theme of the adventure. The writing does a nice job of giving hints of the jungle once you're inside the dungeon, but it lacks a compelling interior dungeon illustration to help the GM get a quick feel for the space. The maps, however, make up for any missing art – it's old school, very clear, and includes lots of little information that is consistent with the area descriptions (e.g. the scraped floor behind a secret door is visible in one room). Consistent with modern old school releases, Beef has isolated sections of the map when describing the corresponding area, making it easier on the GM.

Gameplay ★★★★★: There's a simple choice of adventure hooks: either a noble's inheritance is at jeopardy cause his parents joined a cult, or the PCs are investigating mysterious golden skulls on the market. The 7-room dungeon has more than one entrance. The traps mostly just enough foreshadowing (creaky floorboards, a skeleton with no head), but there is one that has little warning with the potential to be lethal depending on the circumstances. The cultists are more static, but the kobolds move about in interesting ways – maybe the PCs will sneak after them, maybe they will have a running battle, maybe they will try to recruit the kobolds. There's some really nice thematic contrasts around greed/austerity that the kobolds and cultists exemplify. Players have a lot of freedom in their approach – though the elements are simple (cultists, charlatan leader, kobold thieves, some traps), they interact to encourage some great emergent storytelling.
Last edited: Jan 8, 2023