The Strength of Thousands Adventure Path begins! A magic school like no other! The oldest and most prestigious magic academy in the world is the Magaambya, an ancient institution founded by the greatest wizard the world has ever known. This wizard vanished long ago, but his sinister enemies plot against his school and those who attend it. Over their long academic career, the heroes rise from humble students to become teachers, and they ultimately hold the fate of the school in their hands. Graduates of the Magaambya are among the greatest wardens of the world, but if the heroes can't marshal the strength of thousands who have come before them, the venerable Magaambya might fall! The Strength of Thousands Adventure Path is a six-part, monthly series of connected adventures that comprise a complete Pathfinder campaign.

School is in session! The newest students at the venerable Magaambya school of magic must begin their academic careers with tests of their skill and resourcefulness. The heroes can learn much from their teachers and fellow students but must beware of mysterious secrets and sinister plots. The rigors facing any Magaambya students are steep, but the heroes must also contend with strange infestations and supernatural intruders in the school's ancient halls. Education is far from easy at the oldest and most prestigious magic academy in the world!

"Kindled Magic" is a Pathfinder adventure for four 1st-level characters by Alexandria Bustion and Eleanor Ferron. This adventure begins the Strength of Thousands Adventure Path, a six-part, monthly campaign in which the heroes rise from students to teachers, and ultimately decide the fate of the Magaambya. This adventure also details other students to become friends or rivals, rules to gain extra lore throughout a year of academic study, as well as new monsters and new spells--including lore of the prestigious Magaambya! 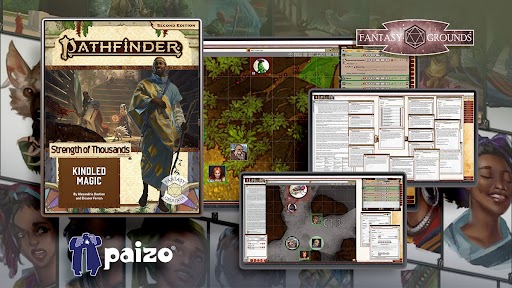 News Digest for the Week of June 4