Land of Vikings!
In the savage north lies a realm where only those who slay mighty draconic linnorms are fit to rule. Where giants and trolls dwell just beyond the veneer of civilization, lying in wait to attack any who tread too far into the wild. Where the magical influence of the First World of the fey hides just beyond a thin layer of reality. Where barbarians, berserkers, and raiders constitute civilization, and the weak serve the strong. These are the fabled, savage, and noble Lands of the Linnorm Kings.

Lands of the Linnorm Kings presents a comprehensive overview of these mighty kingdoms, a realm of powerful Viking kings, capricious fey, and savage beasts.

Inside, you will find:
*A complete overview of the seven realms of the Linnorm Kingdoms, from the traditional raiders of Broken Bay to the sinister fey of Grungir Forest and the war-torn borderland of Hagreach, complete with histories, notes on current events and society, and a gazetteer of each region.
*Detailed maps of seven of the most important cities of the Linnorm Kingdoms, from the streets of White Estrid's Halgrim to the sprawl of Kalsgard, the region's capital.
*Numerous adventure sites and events where hopeful adventurers can prove their worth.
*Rules for building a reputation among the Vikings of the land, using weregild to avoid blood feuds, and designing effigies and punishments capable of putting fear into the hearts of your enemies.
*A bestiary of new monsters and NPCs from the land, such as the legendary linnorm Fafnheir and the fey animal template or iconic Ulfen raiders and berserker cannibals. 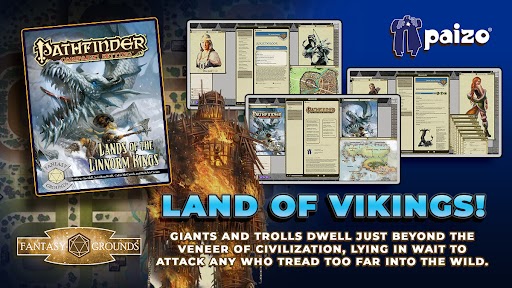