So I'm going to be putting together the Pengoi race as community content on the DMs Guild—complete with kick-ass art by Jason Engle! Brainstorm with me ... what abilities, limitations, etc. make sense for an anthropomorphic penguin?

This relates to a pledge-challenge I'm doing here. 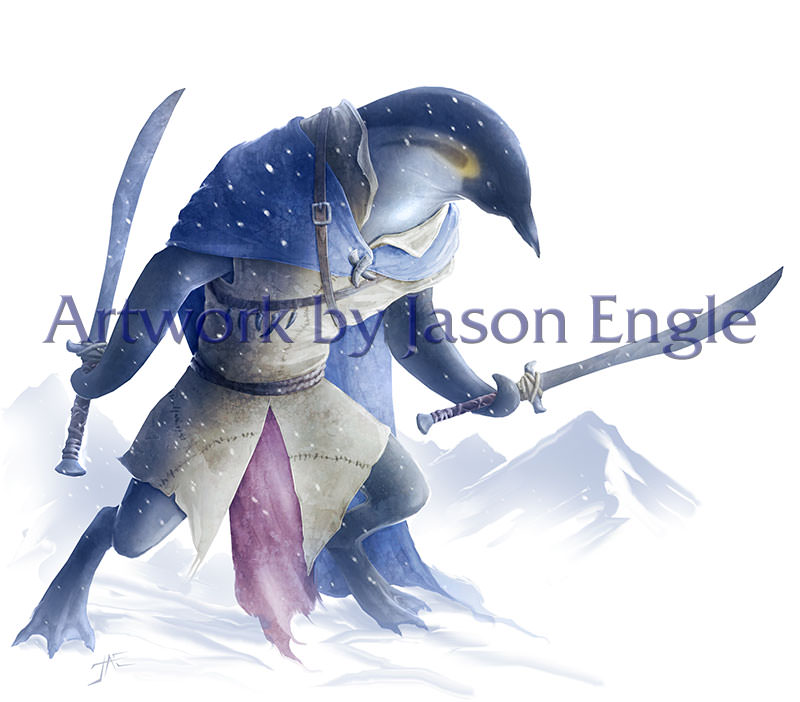 Love the art. I think cold resistance and swim speed are obvious.

It help to get a general idea of their culture and influences.

Love the art. I think cold resistance and swim speed are obvious.

It would help to get a general idea of their culture and influences.

Agree wholeheartedly with the swim speed and cold resistance.

Add in Auran as a native language (or Aquan maybe? They're aquatic birds I guess), and suffering no penalty for fighting underwater, as that seems pretty penguin-ey.

As for stats, I'm thinking Dex and then maybe Con or Wis?

The image above strikes me as them being somewhat nomadic as a people, travelling in smaller groups that meet up with other groups at dedicated times of year (because penguins gather en masses to breed). Maybe being ambush hunters that strike from the water, possibly dragging their prey into the water where they're at a disadvantage.

They should have pack tactics as they are fairly communal and do work together when hunting.

Limitations
As a limitation: Walking speed should be slower on land. Maybe only 20-25 ft, rather than the standard 30? But they can get a 30 ft swimming speed, or even more.
How do Pengoi deal with heat? Should they get any disadvantages when fighting in a desert: dry land & hot sun?

Ability score increase
Dex is a really difficult one. On land, they are clumsy and slow, so you'd almost have to give a penalty (but don't: penalties on ability scores suck). But in water, they are agile. I wouldn't touch Dex, just to avoid such a discussion.
But they can swim huge distances, survive the cold easily, so perhaps a Con bonus makes sense? Maybe even resistance to cold damage? If you base of off the Emperor penguin - the one that stands in antarctic blizzards for months - you should consider immunity to cold damage!
And they know how to survive, so a Wis bonus, and perhaps a proficiency in survival would make sense?
Finally, penguins are soooo cuuuute! So, I could defend a Cha bonus.

Other bonuses
You can probably get away giving them Fey Ancestry (advantage saving against charms).

Culture
I would not think they have a rich culture. Nomadic culture, in large packs. But not much art.
They could be from the barren (ant)arctic islands where they live of fishing. Are they partners or enemies of the Merfolk?
The logical gods that link with the arctic conditions would be Talos (storms), Auril (winter) and especially Umberlee (the sea/ocean). However, all those gods are evil! Do the Pengoi therefore use their cuteness as a deception to hide their true nature, which is frequently evil, even chaotic evil? Or are they the good side in a harsh ash and evil environment?

I don't know if they would need any penalty for heat. Some penguins live as far north as South America and New Zealand.

As others have mentioned, resistance to cold and fast swim speed are a must. I think proficiency in Survival would also be good.

And while penguins may be clumsy walkers on land, they often slide along on their stomach to move more quickly. Maybe the penguin race has a naturally forming ever present sheet of ice on their chest and stomach. This helps regulate temperature in hotter places, and gives them an ability to move more quickly on land similar to the Naga player race ability in Planeshift: Amonkhet. This can also be culturally significant as well. Perhaps unlike their Kenku brethren, these penguin people sacrificed their ability to fly and moved to Frostfell to guard some ancient evil. Maybe this evil is some kind of ice devil, and they contain it by splintering the devil's essence and binding it to the heart of each of the penguin people that is ever born. Think the kalashtar from Eberron, but rather than offering those Quori protection as refugees, this turns each penguin person's soul into a prison. The result is that each are marked by ice that forms over their chest and gives them a curse where despite never being impacted by the cold, they are always freezing and seeking warmth. Culturally they may believe that a "sunny" disposition and a heart full of love, laughter, and warmth can help manage this cold that never leaves. And as long as the race survives, they believe this ice devil will never be able to reform.
Last edited: May 18, 2018

Pengoi − so far the following sounds good to me
• Constitution, Charisma
• Size: Medium (a reallife prehistoric species of penguin was about the size of a human)
• 25 land speed, 40 swim speed
• Cold resistance (but can still be in warm climates too)
• Stealth advantage underwater
• Languages: Common, Primordeal (Auran, Aquan)
• Nomadic fish-eaters
• Terrain: arctic, coastal, aquatic
• (Prefer to avoid conflict with predators, staying at least about 10 feet away from potential threats, but otherwise friendly)

I'm trying to come up with something constructive, but keep saying out loud "They have no thumbs, how can they take over the world." Great, now I'm doing my Spartacus impression "They're people!"

I could see some sort of 1/rest power where they use their cuteness to make an attack on them have disadvantage. Call it Cute and Cuddly.

At this point I can see the Pengoi developing in potentially three directions. Either, a naturalistic creature, as if an intelligent species evolved from reallife penguins. Or, go with the Primordeal and embrace the elemental magic of water and air, with cold and storm. Or, social magic involve charm and cooperation might work too.

Give them a cantrip called Pengo that allows them to make large blocks of super kinetic ice that can be pushed along smooth services as a weapon...

I feel that their culture would have revolved heavily on an astrological lean. Having spent half their year in darkness (for those subarctic types)

I've already created a homebrew of these called ¨Pengin (Pronounced Pen-jin)¨ here is what they got
+2 to dexterity, +1 to wisdom
You start out with one of the following skills of your choice: Animal Handling, insight, nature, or survival
Your base walking speed is 25 feet, you also have a swimming speed of 35 feet
You have resistance to cold damage
You speak common, auran, and aquan
And you can hold your breath for up to 15 minutes.

I know that these facts about real penguins my be off but thi is fantasy after all.
Pengin were mainly built to be rangers or druids. They are typically shy and lean towards neutral or neutral good so screw the idea of being cute an cuddly, they are people not actual penguins!!!. They live in small tribes called a rookery where about 10-20 pengins dwell. The rookeries live in small villages in frozen tundras near the coast. Pengins are excellent swimmers, fishermen, and craftsmen, and most of them have finely honed survival skills. Both genders are equal and the tribes are ruled by chieftains of either sex. Many pengin do strike out on there own though, leading a life of solitude. I have yet to figure out what there religious system should be, I would love any ideas!

When I see the phrase "penguin powers," I immediately think of the giant penguin with electric green tentacles from the Monty Python "Scott of the Sahara" sketch. 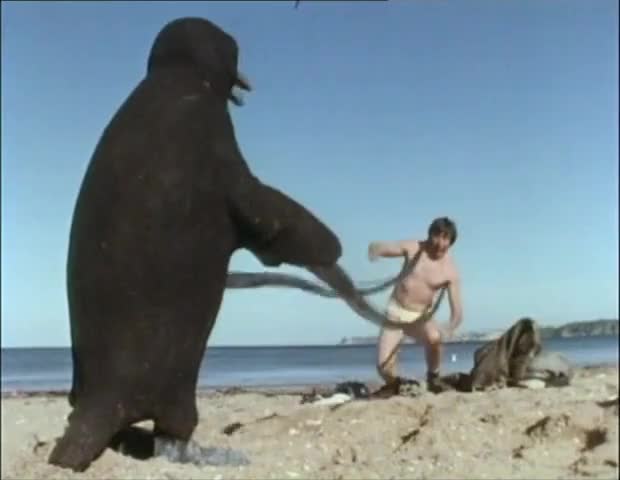