A month ago I had little interest in the Aliens Roleplaying Game. It looked okay and sure did get a lot of hype, but I generally thumb my nose at licensed RPGs (despite owning many); the hit : miss ratio is unfavourable and there have been some pretty bad licensed RPGs over the years. Plus, I always felt the Aliens universe was better off being limited to a couple movies—so the story can have a beginning and an end—rather than being a big, sprawling franchise.

But then a friend got the book and let me flip through their copy and read the rules.

And I realized I had been so completely wrong. After just a few minutes I was damned if I didn't just want to get my own copy, but also run a game session or two in the Alien universe. And I knew I had to write a review, sharing my wrong-ness with the entire Internet.

While the concept of the game is just what you'd expect, the execution blew me away. While I'm an ardent proponent that "system doesn't matter" and that you can have fun playing any RPG with the right people, this game was a firm reminder that a good system makes you WANT to play that game. You choose to play it over other systems. And this system makes me want to run a story using its rules.

The feedback system for the Stress mechanic is great, and I want to steal it for my own design so badly. I adore that it primarily relies on player choices and risk/reward to build tension. The growing unease as your character's stress increases, like a game of Dread with dice instead of the Jenga tower: a mechanic I've toyed with a few times but never managed to work satisfactorily. And this game nails it. (This ruleset would work really nicely for many other genres, and I'd like to port the rules into a zombie apocalypse game or other horror genre.) And the rest of the game seems quick and easy to learn with just a dash of customization.

Meanwhile, the book really works hard to capture the diverse types of Alien story, from space horror the action, from blue collar truckers in space to heavily armed colonial marines, while referencing several past sources both film, novel, and comic. The titular aliens are only the beginning. 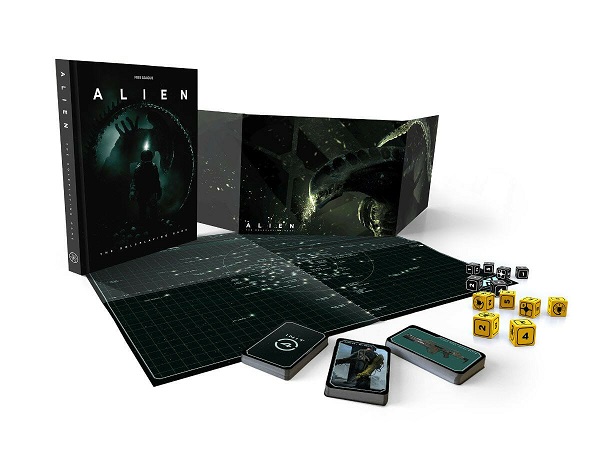 Interesting. I'd definitely give it a whirl at a convention but doubt I'll immediately invest in it (despite almost pre-ordering).

It sounds worthwhile if you know you'll play. I run a number of 'surprise' xenomorph adventures using Traveller and it works well enough. Silhouette would also work.

It's hard to invest in yet another system no matter how sharp this one looks.

Review of Junkyard Blues for M-Space