Soulbound—Champions of Order expands the Soulbound core rulebook with new archetypes, talents, miracles, spells, endeavours, and equipment. It also offers a deeper dive into the world of Soulbound with details to flesh out player characters and connect them more strongly to the world and to each other. 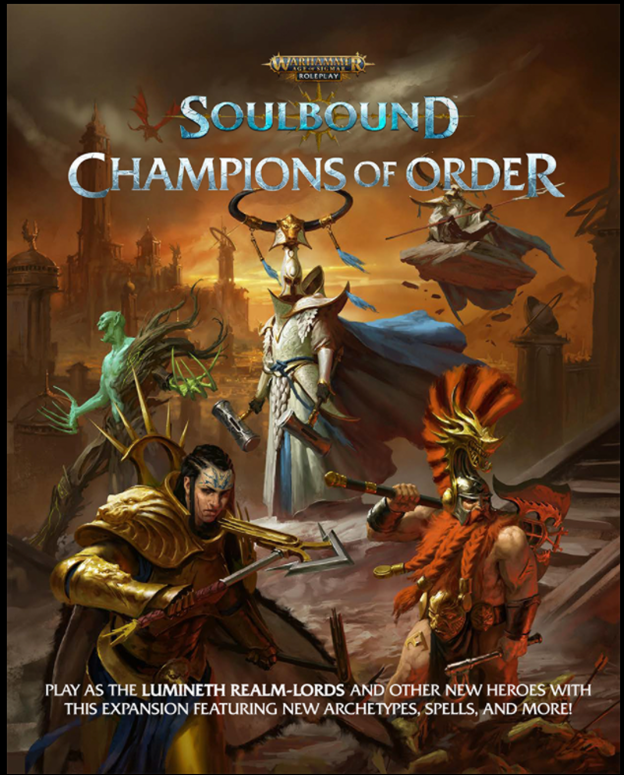 My thanks to Cubicle 7 for providing me the book for this review in my ongoing coverage of everything Warhammer RPG. Before adding new rules, Champions of Order dives into the Binding Ritual that ties the PCs together. Random tables provide greater details like who forged the Binding (Sigmar, Alarielle, and more each with unique results from the ritual) and to what end (find, destroy, explore et cetera). More tables detail how the Binding affected each PC. After that are more tables with short-term and long-term goals for PCs.

Species and culture are broken down into smaller groupings like city-state, lodge, or other location. Campaigns in Soulbound tend to revolve one city or similar location that the PCs get to know very well. Setter’s Gain, for example, is a Lumineth city where the dwellers try to ascend the city’s spires through philosophical, theological, and arcane tests. The additional detail here fleshes out those locations, giving GMs more fuel for adventure ideas and more details for PCs wanting to detail where their characters come from.

Armed with greater roleplaying details on PCs, the book then turns to new rules. Each PC now gets a sub-faction bonus to drill down into smaller groups inside larger cultures. In addition, the Lumineth Realm-Lords are introduced with four new archetypes and four sub-factions. The Realm-Lords are Aelven worshippers of Teclis and Tyrion from the Realm of Light. Lumineth from Settler’s Gain can arrange their environment in a symmetrical and ordered fashion to refine the mind and spirit. A 1d6 roll follows and if higher than the current Doom the practitioner adds 1d6 to all Mind or Soul tests until the next Rest.

I don’t play Warhammer Age of Sigmar the miniature wargame, so the Realm-Lords are brand new to me. I find the faction fascinating. They are warriors and mages of stone and light from a mountain realm and a people that once faced extinction. They embody light and perfection and order but are tempted by arrogance and pride.

Other Species get many sub-factions and new Archetypes like the shadow using Khainite Shadowstalker, the rage filled Grimwrath Berzerker, the soul stealing Isharann Soulrender, and more. Seriously, some of these Archetypes have serious issues that PCs can hone and harness as deadly weapons. They just have to be careful that these same issues don’t harm themselves in the process.

In addition to the new faction of the Lumineth Realm-Lords and the new sub-factions, a new Lore of Magic is included. The Lore of the High Peaks includes spells that deal with stone, air spirits, gravity and weight, and other spells related to mountains. One spell I particularly like is Memorial Stone, which allows the caster to leave one memory embedded in a man-sized or small stone object that anyone touching it then experiences.

Existing rules also get additional options. Desperate Measures is an Endeavour available when Doom is 7 or higher. A PC gains 20 XP to use before a final attack on their enemies but can never gain XP again. The Contacts Endeavour in Soulbound gets supported with eight pages of possible contacts and allies.

This book is filled with more information on the world of Soulbound. It is also packed with rules. Too many rules can become a problem, overwhelming the players and GM and unbalancing the game. I haven’t gotten a chance to playtest these rules yet, but based on my reading I believe this supplement does more to enrich the world and the gaming experience then it does simply adding more options and power. Even if a GM doesn’t use all the material, having new equipment and Endeavours is normally helpful and the eight pages of NPCs that support an Endeavour from the core rulebook shows the book’s value. I recommend this book, but with the caveat that the GM and players should be cautious about adding everything all at once, especially if they are new to Soulbound. This first rules supplement adds tremendous value to both the setting and the rules supporting it, not just a power up.

Personally, I also tremendously enjoyed the book. It had the same tone and feel as the core rulebook, the art and layout have a similar high quality, and Champions of Order is fun. It introduces big new ideas, a new faction, supports existing material and rules, and expands the world without being overwhelming or overshadowing what has come before.
Click to expand...

Charles Dunwoody started playing and running RPGs with Advanced Dungeons & Dragons (before it was first edition) and is currently GMing the One Ring 2E. Currently, he freelance writes including articles for EN World and Geek Native as well as his first PDF adventure for Call of Cthulhu: Michigan Mythos: Fall Colors. He wrote a few articles for Dragon Magazine when it was in print, wrote a bit more for Mongoose’s electronic Signs & Portents, and was paid for a supplement for Bulldogs! (d20 version) that was sadly never published. Charlie is a participant in the Noble Knight Affiliate Program and the OneBookShelf Affiliate Program, both of which are affiliate advertising programs designed to provide a means for sites to earn advertising fees by advertising and linking to Noble Knight Games and DriveThruRPG respectively.
M

I loved Champions of Order all the extra stuff just adds onto the Core excellently.