Rider is now available in PDF at Drive-thru RPG and the Independence Games webstore.

The American frontier has always been a source of American mythology and has been explored in novels, on the stage, and on film and television. Now, with Rider, you can enter the world of the Old West.

Rider uses the Cepheus Engine rules as a base with modifications made to fit with the "Old West" setting. Rider draws inspiration from both fictional and historical Western lore but definitely sides with fictional portrayals.

Rider features improvements on the character generation system you will find in Clement Sector and Earth Sector. While we continue to follow the Independence Games tradition of giving characters full backstories, Rider gives the player a greater control over that backstory while maintaining the fun of random character generation.

Rider features numerous details on gambling, drugs and alcohol, weapons, and what one might find in a Western town. The game has 23 Career Paths with everything from Homesteaders to Vagabonds. You'll find Clergy, Doctors, Gunslingers, Con Artists, Soldiers, Outlaws, and many more. Rider has our quick NPC generation system as found in Ensemble Cast along with special rules for train heists, bank robberies, and, of course, the showdown at High Noon!

Are you ready for a new adventure? Then saddle up and get ready to ride! 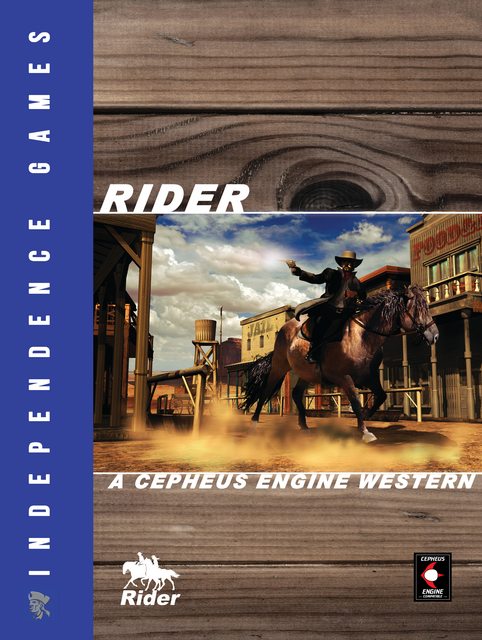