This week’s RPG crowdfunding review looks at projects that end by September 24th. Featuring sourcebooks, RPG zines, and more, this article shares some innovative options to bring to your RPG gaming table.

“A Celtic-Roman inspired tabletop RPG about humble townsfolk who rise up to become legends. Legends of Avallen is an indie tabletop RPG inspired by Celtic mythology and Roman-occupied Britain. In this fantasy world, players and gamemasters alike will play out tales and themes of humble beginnings, the clash of cultures, and the mysteries of the Otherworld. Where other games skip the origins of your character, Legends of Avallen starts from the very beginning: you're an ordinary townsperson looking for an excuse to adventure. From those humble origins, you will quest out into Avallen, growing both in character and in power as you discover its magic. Soon you'll choose to follow a legendary path, learning the ways of the Bard, the Gladiator, the Magister, or many more. You will seek out lost relics, slay terrific beasts, riddle with the Gods, and change the fate of Avallen forever. Avallen needs legends – how will you forge yours?” 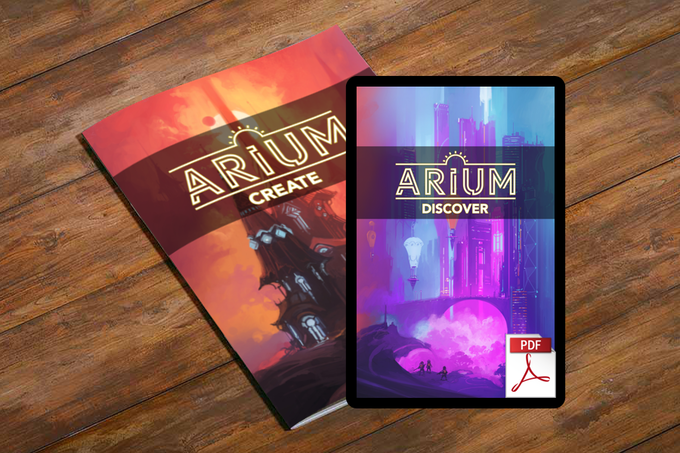 “A tabletop roleplaying game in two books. Create worlds. Discover the stories within them. Arium is our answer to a simple question: why play in someone else's sandbox when the whole group can have a blast creating their own? Arium: Create contains our refreshing and intuitive system for creating your own Arium, and you'll do it in one or two hours! The Arium you create will be unique to your group, and we promise everyone will be in love with it. Arium: Discover will work with any world. Take your favorite TV series, your homebrew setting, or a movie/novel and quickly adapt to run it with Discover. The streamlined d6-based system will feel familiar yet flexible. Additionally, the system of Boons and Banes encourages play that explores the important and meaningful by focusing on the relevant thematic elements of your Arium.” 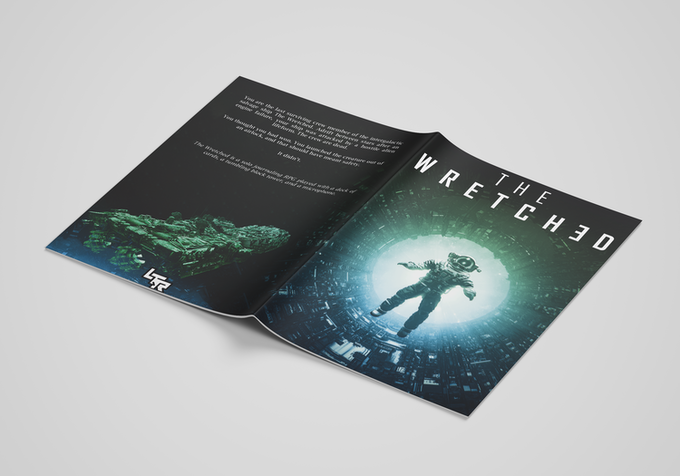 The Wretched: Second Printing from Loot The Room

“Bringing The Wretched back into print. You are the last surviving crew member of the intergalactic salvage ship The Wretched. Adrift between stars after an engine failure, your ship was attacked by a hostile alien lifeform. The crew are dead. You thought you had won. You launched the creature out of an airlock, and that should have meant safety. It didn’t. The Wretched is a solo journaling/roleplaying game played with a deck of cards, a tumbling block tower, and a microphone. The Wretched is a game about human resilience in the face of overwhelming odds and almost certain death. It is a game about isolation, fear, and perseverance. You play a lone survivor of an horrific attack. You have seen and done terrible things, you have seen your friends - your found family - brutally butchered by something you can’t even begin to comprehend, something that you were sure didn’t exist until it manifested itself aboard your ship.” 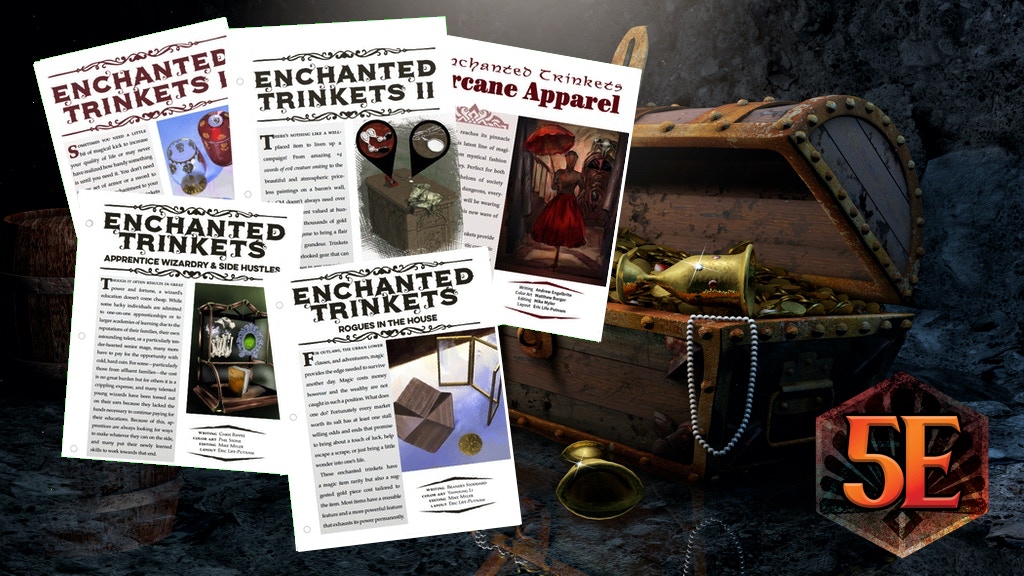 “A collection of colorful minor magical treasures to spice up your game without breaking it! 14 days only! This collection of five short PDFs for the 5th edition of the world's oldest roleplaying game presents you with 65 minor magical items suitable for inserting into any campaign. These items are not mighty artifacts, and they won't turn the tide of a war, but they can spice up and add colour to a magical world! Equip your character with a marble of direction, messenger ant, box of bees, or a cage of folly. Discover a conch of the secret voice, wand of cobwebs, paradise parasol, or a prismatic gown. Uncover wondrous magical treasures without breaking your game! And the best bit? It's just £7 (under $10) for the lot!” 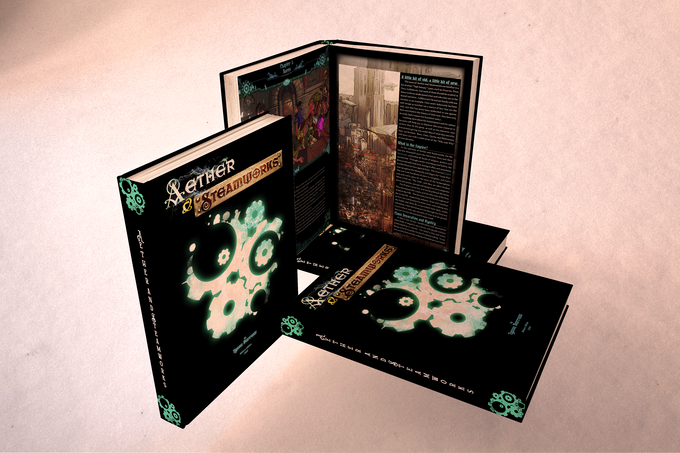 Aether and Steamworks 1.5 from Tyson Burruss

“An Aetherpunk TTRPG using a simplified d20 system set in a universe reeling after a vast war, with opportunity around every corner. It's Steampunk meets high fantasy magic in large amount. Vast impossible cities fly in the sky with engines and magic working together, Airships of wood, prop and balloon travel inside of magical atmospheres through space, arms and legs are replaced when lost with magical technology, and Aether (magic) is more central than steam technology. Most stories are told as ordinary folk fighting against/to reform an oppressive regime (the Silvershield Empire in this case). Hope that clears things up. 21 Race Choices, familiar in face but new in lore and abilities. 8 Unique Classes with 40 potential abilities as you level each. 100 Quirks, as well as multiple Virtue choices to help develop your character. Setting information to begin a game on any of the 7 worlds and within the Void. Unique Equipment, Modification rules, and Personal Augmentation information for those characters that wish to be part machine, or lose limbs in combat.” 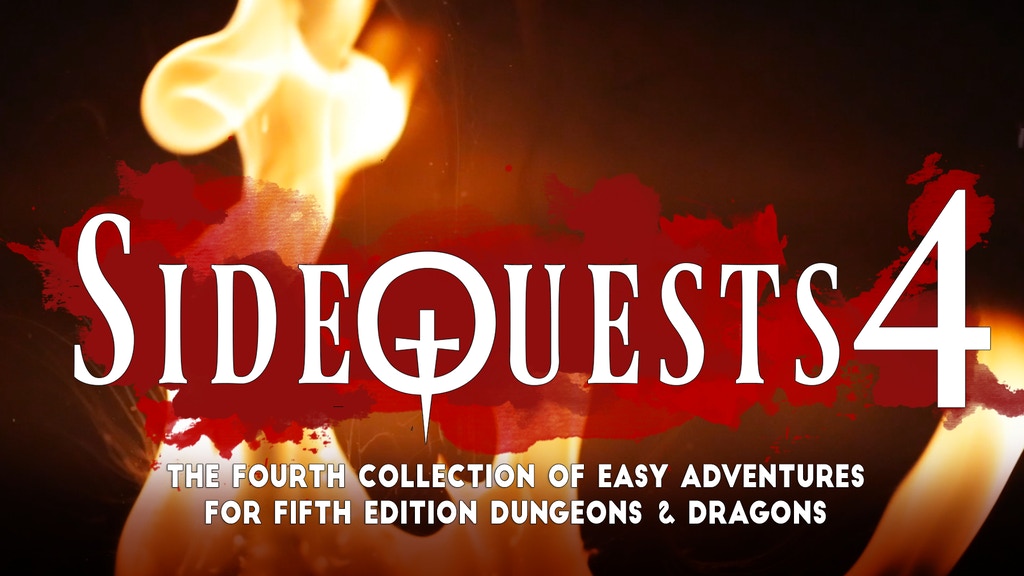 “The fourth collection of instant adventure modules for Fifth Edition D&D, designed to easily implement into your campaign! SideQuests are a collection of short adventures designed for Fifth Edition Dungeons and Dragons. These one-shot style campaigns are designed to be compelling standalone stories that can be implemented, played through, and completed in just a few sessions. Whether you're using them as a filler adventure between your own major story arcs, as one-offs to play with people unfamiliar to D&D, or just because you forgot to plan your next session, the second edition of SideQuests aims to be even more invaluable tools for your DM toolbox. Each campaign comes with a variety of customization features: Adventure Hooks and Epilogues — so you can naturally ease your players in and out of each and every quest. SideQuests are designed to work in tandem with your own campaigns, so you can easily substitute anything within the modules for your own original content. Each volume also comes with a variety of role-playing, puzzle, looting, and combat scenarios, so players will enjoy them no matter what they personally value in a roleplaying adventure.” 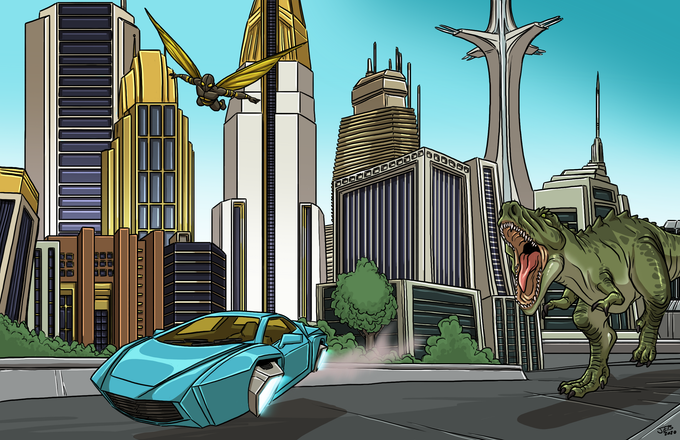 New Bristol: A Campaign Setting for your Supers TTRPG SWADE from Charon Productions

“A complete city for your Superhero campaign. Complete with a full adventure for Savage Worlds TTRPG. New Bristol is both a campaign setting and a campaign in its own right. The intention behind this project is to introduce a unique city into your player’s campaign via the introductory adventure, making it a unique setting, perhaps even the base of operations for your players. Superheroes are defined not just by their powers or their rogues’ gallery of villains but also by their surroundings. Superman wouldn’t be the same character without Metropolis, and putting Batman into Cleveland just wouldn’t work. A hero’s city is as much a defining characteristic of the hero and their struggle as their powers. In a comic, the city generates plot lines at a hero, generates supporting characters, and builds the drama. New Bristol will help you bring that to your roleplaying experience. Building on the legacy of fictional cities, New Bristol draws upon the heritage and history of comic book cities, drawing inspiration from such notable towns as: Gotham, Metropolis, Helium, Star City, [and] Astro City.”

I am keeping a close eye on 65 Enchanted Trinkets because I think it is a perfect model for most PDF publishing in today's environment.

He didn’t forget it. It doesn’t end before September 24th.

Morrus said:
He didn’t forget it. It doesn’t end before September 24th.
Click to expand...

I (a) missed the bit in the intro that said they were all ending by the 24th and (b) am just really excited by the Dead Milkmen module.

...I feel like you're asking for something to go wrong if you name your ship "The Wretched."

Birmy said:
...I feel like you're asking for something to go wrong if you name your ship "The Wretched."
Click to expand...


It is pronounced WERT-shed. A little known mushroom sprite from Bavarian folklore. What we have here is an unfortunate coincidence.

Valhalla Soundscapes, I was hoping for a bit of Blind Guardian...

My interview with Morrus about 65 Enchanted Trinkets for D&D 5th Edition is live at d20 Radio here.