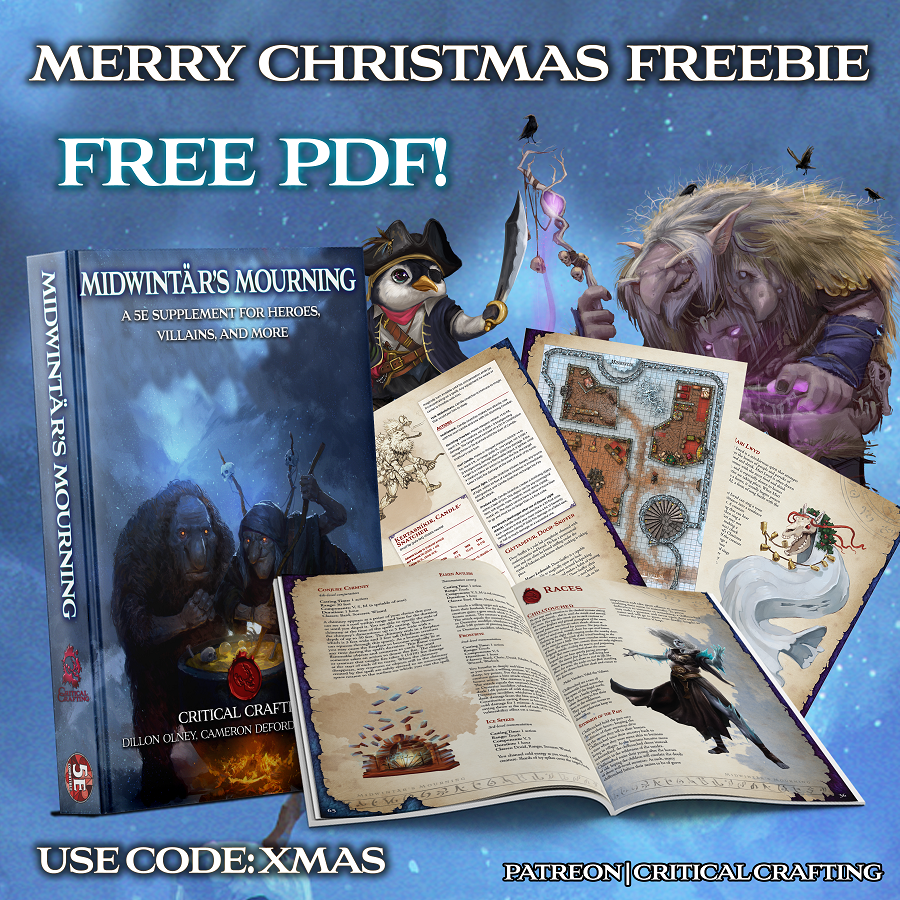 David Nielson released the Ultimate Dungeon Terrain Zone Combat for RPGs, an alternate set of combat rules that can be bolted onto most RPGs. The rules are between theater of the mind and grid-and-minis combat by using a zone-based range system so you can still use your minis and terrain without having to go into the crunch of full tactical maps.

If you’ve been curious about Coyote & Crow, there’s now a free introductory adventure for the alternate future sci-fi RPG. The download includes basic rules for the system, pre-generated characters, and an adventure to run to try out the system.

JKW released a pair of new classes for use with the cyberpunk RPG CY_BORG, the Fallen Hill Angel, a (former) rich a**hole, and the Ripper Junkie, a Cronenberg-inspired self-surgery maniac.

And if you prefer MÖRK BORG standard edition, S Murphy Games released Dwarf Borg, a new dwarf class including a dwarven name generator and six shantychants to yell at the top of your lungs.

Gabrilo Desprint posted Themed Shop Lists, an easy to reference list of 5e equipment sorted by what you shop you would find it in. No more fumbling around long tables trying to figure out what would be in an apothecary versus a general goods store!

Who wants a post-apocalyptic RPG when you can have a post-all-the-apocalypses RPG? Dice Doctor Games gives us Omega Soup RPG, an OSR gonzo post-cataclysm game where all the timelines have collapsed in on each other, meaning all timelines have happened, are happening, and will soon happen all at once. And if you want to know the tone of the game, the description suggests the character type of “Demonic Laser Bunny”.

And if that’s not enough OSR for you, Richard Kelly has the 9-page RPG Bite-Sized Dungeon ready for your own dungeon crawl adventures or set up to easily convert those from other systems. Plus you can get five new hexcrawls (over 100 pages of content) for use with this system or any OSR system you like.

Two Little Mice released a quickstart for the RPG Household where you play the Little Folk living in a large abandoned house in the present day where each room is its own nation. Can you deal with the political machinations as each room stands on the edge of war? Also available in Italian.

Over on Dungeonmasters Guild, Michael J. Thompson released Misfortune’s Favor, an adventure set in Phandalin for 4th-5th level characters who must rescue Sister Garaele from servants of Besheba.

If you want something for new characters, there’s King Thornheart’s Hidden Treasure by G. Gotico, a first level adventure seeing the treasure of the late (and corrupt) King Thronheart.

Henry Brownell released Warclad: Martial Class Utilizing Powered Armor. The class builds the armor into the class itself, allowing you to customize the armor and choose different options for how it works.

Well, this is a nasty thought just from the title: Ring Mimic. It’s a mimic that’s a ring from Lucas Garczewski with stats (both as a monster and a magic item) along with plot hooks and suggestions for how the DM can adjudicate skill checks for detecting the finger-biting nasty.

So this is an interesting release style. Marcel Wirtz and Christian Diewold released The Ghost Ship, an adventure for 2nd-3rd level characters taking place in Baldur’s Gate investigating a rotten and pilotless ship that’s arrived at the harbor.

We also have a collection of maps as well. All are free or pay-what-you-want with the suggested price listed at the end. 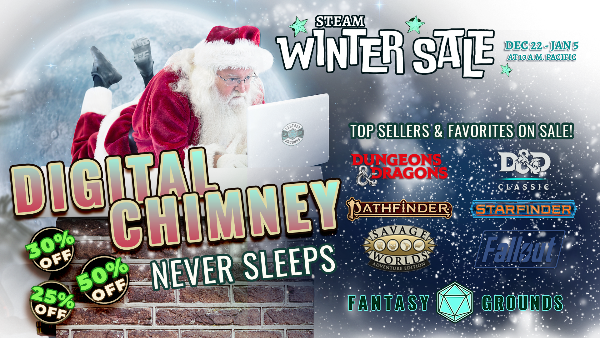 Fantasy Grounds has a big sale on both licenses for Fantasy Ground Unity and for game books, maps, and tokens from Dungeons & Dragons 5e to 5e compatible third-party games to Pathfinder 2nd Edition to Starfinder to Dungeon Crawl Classics to Fallout: The Roleplaying Game to Savage Worlds and a lot more.

Parable Games has two bundles for the Shiver RPG to bring your favorite horror movies, scary TV shows, and campfire horror tales to the tabletop. The first bundle features the Shiver RPG Core Rulebook, a character sheet, and the Shiver Gothic: Disciples of Dregstone gothic sourcebook. The second bundle adds on the Shiver Gothic: Secrets of Spireholm campaign setting and multi-chapter adventure.

For creators looking for some quality maps (or just anyone who wants maps), Grimm Press released the Stock Maps: Fey Lands Commercial Compilation bundle featuring a dozen battle maps of fantastical feywild-inspired locations with a commercial license for use in your products.

Skirmisher Publishing is…well, in the middle of something. The 12 Days of Christmas collection is a series of bundles coming out, one for each day of the 12 days of Christmas. So far, we have Day 1, Day 2, Day 3, Day 4, Day 5, and Day 6 with six more bundles to come over the next several days. There’s a grab bag of products in each bundle from random tables to adventures to podcasts to campaign settings and a lot more.

I’ve talked about Samuel Newnes and his Modern Subclasses project before as PWYW releases, but now he’s collected all 13 of the 5e subclasses rethemed around modern-day settings into a single convenient bundle. Play a barbarian that chugs energy drinks, a bard that writes commercial jingles, a druid into extreme sports, a paladin running the HR department, and more. 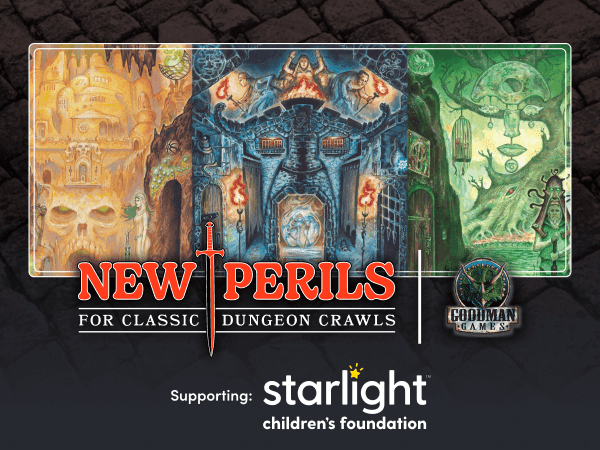 Bundle of Holding has a huge bundle for 13th Age from Pelgrane Press. This bundle includes the core rulebook, two bestiaries, the rules expansion 13 True Ways, two loot books, and the introductory adventure Crown of Axis while the bonus collection adds on ten more books and adventure collections.

For some old school RPG fun, Steve Jackson Games and Bundle of Holding have The Fantasy Trip bundle featuring one of the first competing fantasy RPGs dating back to 1977. This new edition of the game from Steve Jackson himself has been collected into a bundle with all the core rules plus the Red Crypt solo adventure and two play aids: Labyrinth Planner and Deluxe Character Journal. The bonus collection adds on The Fantasy Trip Companion, an adventure collection, The Book of Unlife, and the first issue of the game’s zine Hexagram.

Also on Bundle of Holding, there’s a pair of bundles for Rifts, first the Rifts Core Mega to get you started with the multiverse-hopping RPG. The Corebook Collection features Rifts Ultimate Edition, 3 Rifts Guides and Kits, and Index and Adventures V1-2 with the Sourcebook Collection add-on including eleven sourcebooks to expand your game.

The second bundle is the Rifts Land and Sea bundle featuring the books Rifts Atlantis, Rifts Underseas, Lemuria, Splynn Dimensional Market, and Secrets of the Atlanteans. The Nations Collection adds on another nine books from the Rifts Worlds series.

If you’ve been left behind on the Blades in the Dark train, Bundle of Holding is here with a bundle of Forged in the Dark books. The core collection includes Blades in the Dark core rulebook, the solo play variant Alone in the Dark, and the Duskwall Heist Deck and Doskvol Street Maps accessories, while the add-on gives more setting options including Band of Blades, Scum and Villainy, Hack the Planet, A Fistful of Darkness, and Glow in the Dark.

If you want a Forged in the Dark game that comes highly recommended, Grant Howitt and Chris Taylor have a pair of bundles for their Spire RPG and setting. The Starter Collection features the core rulebook Spire: The City Must Fall detailing the mile-high fantasy-punk dark elf city of The Spire along with the Strata sourcebook and three campaign frames. The Bonus Collection adds on six more titles to expand the world along with an mp3 soundtrack collection to set the mood for your games.

There’s also the the Heart Bundle featuring the Heart: The City Beneath spinoff of The Spire that works as an expansion or as its own game. This stand-alone game takes place in the undercity and dungeons beneath the Spire and sends players into the outlawed cathedrals, predatory buildings, and twisted night forests that lurk under the city. The bundle includes everything you need to play including the Heart: The City Beneath core rules and four supplements to expand your game.

Over on Humble Bundle, Goodman Games has the New Perils for Classic Dungeon Crawls bundle featuring at the top tier a collection of 30 products including the Dungeon Crawl Classics core rulebook and judge’s screen and a massive number of adventures plus the licensed campaign setting The Greatest Thieves in Lankhmar based on the Fritz Leiber novel series Fafhrd and the Gray Mouser.

The Dungeons & Dragons licensed game Idle Champions of the Forgotten Realms may technically be free, but like most “free to play” games has a ton of paid add-ons and DLC. And the Idle Champions of the Forgotten Realms Bundle has a collection of starter packs to give you a leg up in the game. The base tier gets you the Bruenor Starter Pack, the mid-tier adds on Jarlaxle and Minsc & Boo plus five others, while the top-tier features a whopping 14 DLC bundles.

It’s interesting timing with the announcement of Henry Cavill starring and producing in a Warhammer 40,000 TV Series, but this bundle came out before the news broke so you can get the jump on adventures in the Imperium with Warhammer 40K Wrath & Glory. While there are three levels to this bundle, I recommend any new players wanting to check out the system go ahead and get the top level because it’s the only one that includes the Core Rulebook.

That’s all for this week! If you know of any bundles or sales starting soon, please contact me on the EN World Discord, tag me on Mastodon, or send me a message here on EN World. Discount percentages have been rounded to the nearest whole number and are based on the standard retail price provided by the site. Note: Links to Amazon, Humble Store, Humble Bundle, Fantasy Grounds, and/or DriveThruRPG may contain affiliate links with the proceeds going to the author of this column.
Click to expand...