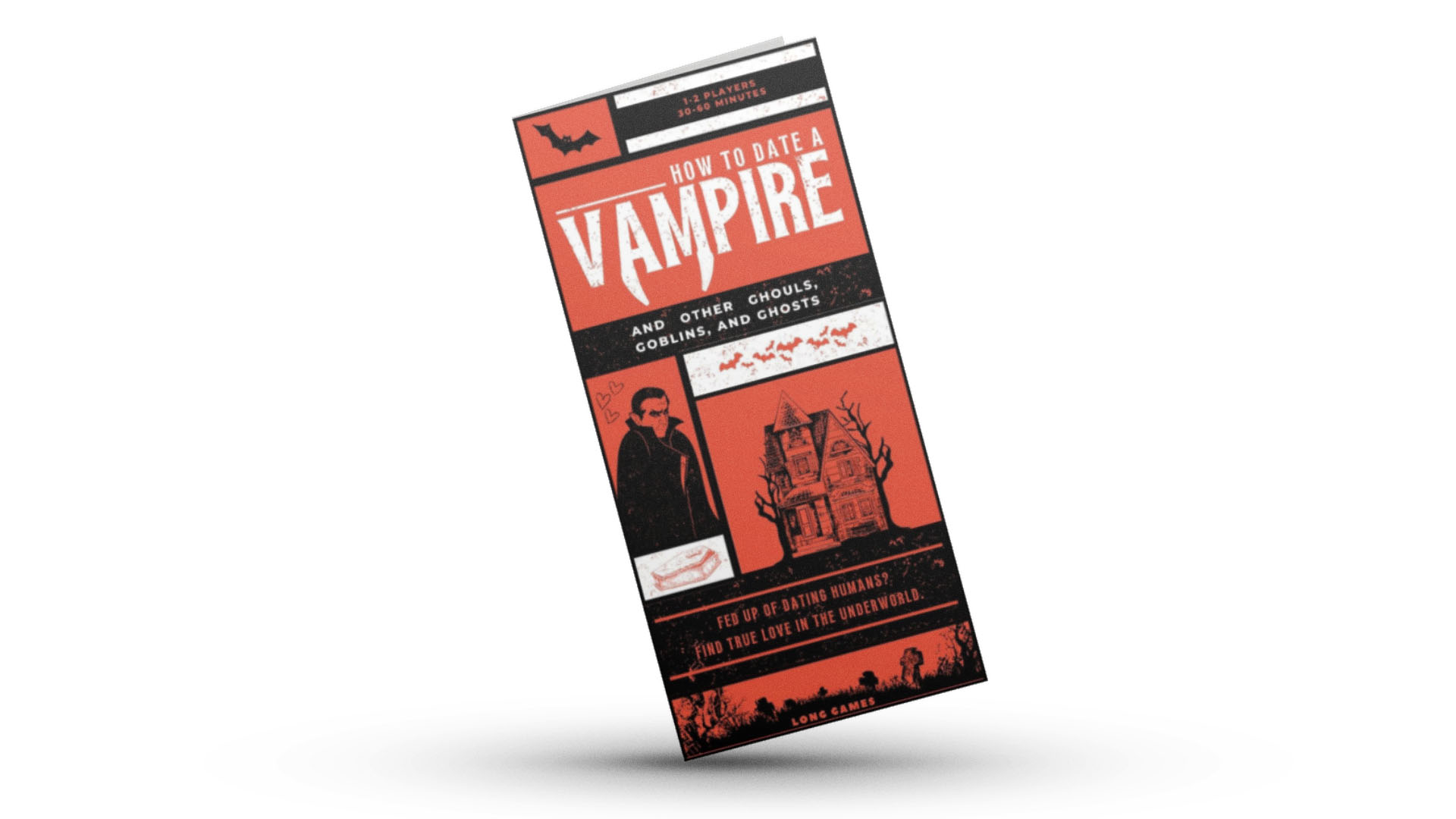 On DriveThruRPG, Handiwork Games released a|state Playbooks, a collection of 27 form-fillable playbooks for a|state second Edition and one blank playbook. This collection will make jumping into the Forged in the Dark cyberpunk RPG much easier.

With the Pathfinder adventure path Abomination Vaults getting new editions for Pathfinder 2nd Edition and Dungeons & Dragons 5e, Taylor Hodgskiss wants to make the megadungeon even better with The Abomination Vaults: Expanded. This 86-page expansion adds on new lore, additional content suggestions for each level of the vaults, random encounter system custom-made for the adventure, guides for integrating the Beginner Box content, extra side-quests, and a lot more to turn the dungeon into a full-fledge campaign.

Long Games released the pamphlet-sized solo/duet RPG How to Date a Vampire. Go on seven dates with a vampire and ask two questions while being asked one and, after the seventh date, decide if you want to make it official.

For more duet play with a horror twist, Jack Smith released Keeley’s Gold, a one-player-one-keeper adventure for Call of Cthulhu. Thirty years ago, a cult was chased from the titular farmstead after complaints of “shooting stars” emanating from the farm. Now, Orion Keeley is selling milk he calls “Keeley’s Gold” raising concerns he may be resurrecting the cult. Though designed for one player, there are also guidelines for adapting the scenario for a full party of Investigators.

‘Tis the season to start planning holiday one-shots, and Arkphoenix RPGs has your back with the Christmas Town Generator. This system-agnostic supplement will help you create your own Christmas village for use in any sort of merry adventure this holiday season.

Erik Åhlin wants to expand your Mutant: Year Zero games with Zone Veterans, a collection of over 30 new talents for Mutants, Animal Mutants, Humans, and Robots. Also available in Swedish.

Over on Storyteller’s Vault, Thea Vik has a great player reference with printable bookmarks for Vampire: The Masquerade. Each bookmark represents a Kindred clan with all the bookmarks collected in a PDF for easy printing as well as individual PNGs if you want to customize yours.

You can also pick up a new version of the Bard class from Elly, revised to be “a bit more fair, balanced, and fun while staying within the spirit and confines of D&D 5e”.

If you want to bring a bit more magic into your game, Wyll Hood has Magical Martial Subclasses featuring new subclasses for the Barbarian, Fighter, Monk, and Rogue adding magical abilities to these martial classes.

And if you want more revised versions of 5e classes, Conner Brown released a new version of the Battle Master Fighter by expanding the class abilities into a maneuver system.

Chloe Page released The Shades of Charnel, an adventure for Levels 3-5 that sends the party into a system of mysterious catacombs to find a life-saving map that can protect a village from collapsing into the ground.

Okay…so Glenn Huston released an absolutely shocking number of adventures this week. Each of these is available as Pay What You Want with a suggested price of $0.50. 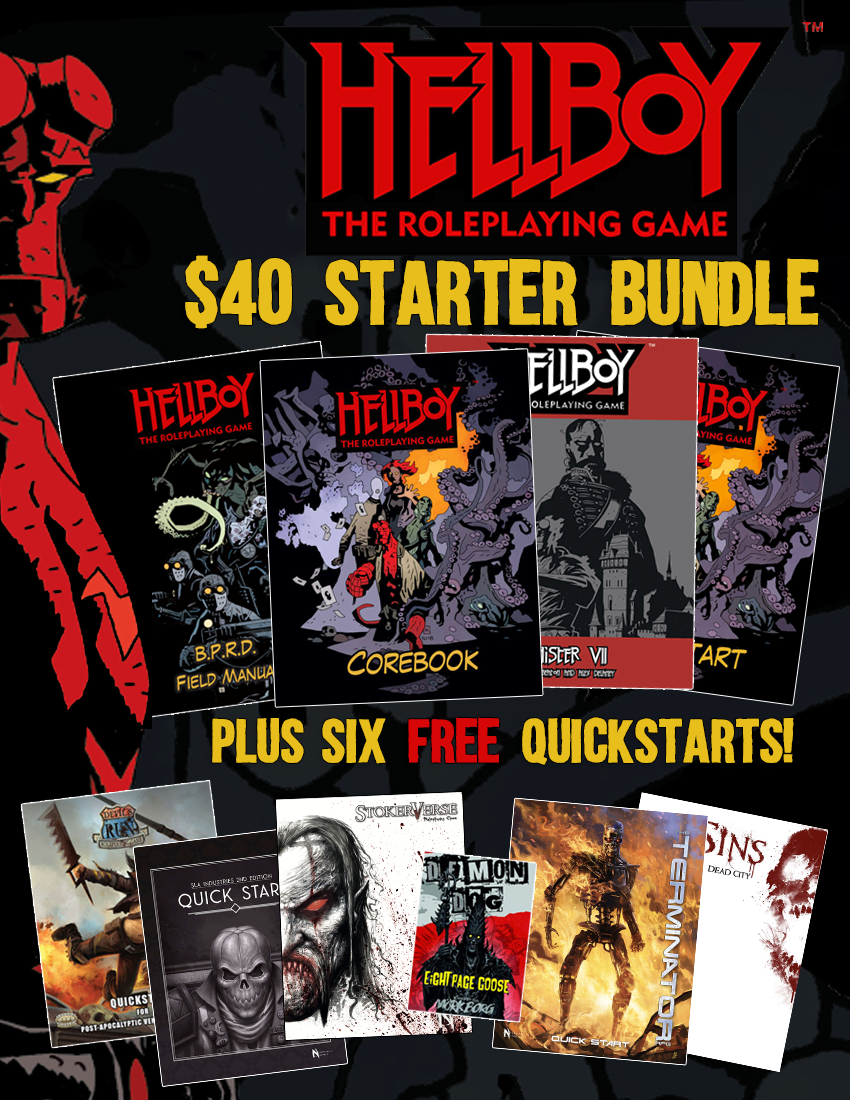 Nightfall Games is wasting no time after taking over Hellboy: The Roleplay Game by offering a bundle to get you started. The bundle features the core rulebook, the Quickstart, the sourcebook B.P.R.D Field Manual, and the first adventure in The Korhonen Series campaign, Cannister Seven along with quickstarts for six of Nightfall’s other RPGs.

I always love seeing collections of sci-fi/cyberpunk/post-apocalyptic maps for VTTs because it can be difficult to find enough to satisfy the demands of Shadowrun, Cyberpunk RED, Fallout: The Roleplaying Game, ALIEN RPG, and others. CT Nihilo released a collection of 19 maps perfect for modern and near-future RPGs including a city junkyard, cyberpunk clinic, dark alley, alien caves, dive bar, hotel, post-apocalypstic rocky wastes, and more. 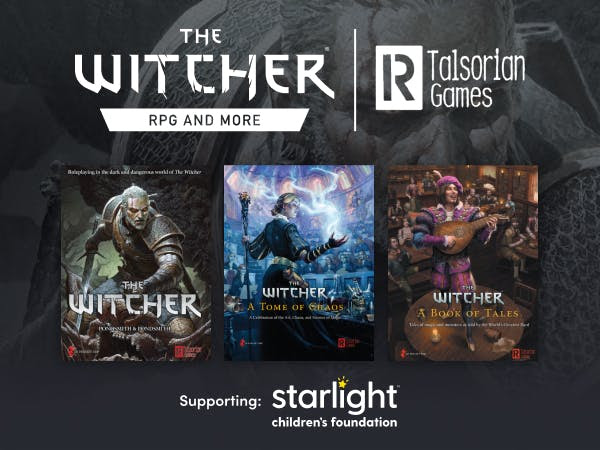 There’s also a nice mix of stuff on the Cornucopia 2022 bundle from Bundle of Holding. The Starter Collection features Wolves of God (a dark ages England RPG from the creator of Worlds Without Number), Jiangshi: Blood in the Banquet Hall (a game about Chinese immigrants running a family restaurant and fighting off hopping vampires), and Wanderhome (a pastoral game about animal travelers). The Bonus Collection adds on Hard Wire Island (retrofuture cyberpunk in space), Defiant RPG (supernatural aristocrats defending their Holdings), ARC Doom (stop the apocalypse that’s ticking ever closer on a real-world Doomsday Clock), and Viking Death Squad (the name kind of acts as a good description here).

R. Talsorian Games and Humble Bundle have The Witcher RPG and More Bundle, and the “and More” title does a disservice to the amazing Castle Falkenstein. I assume The Witcher needs no introduction in 2022 as the bundle includes at the top-tier the core rulebook and the supplements A Book of Tales, A Witcher’s Journal, A Tome of Chaos, and Lords & Lands. However, this bundle also includes the masterpiece Castle Falkenstein combining fantasy elements, Victorian aesthetics, and ingenious industrial technology into a game that was steampunk almost before the term “steampunk” even existed. 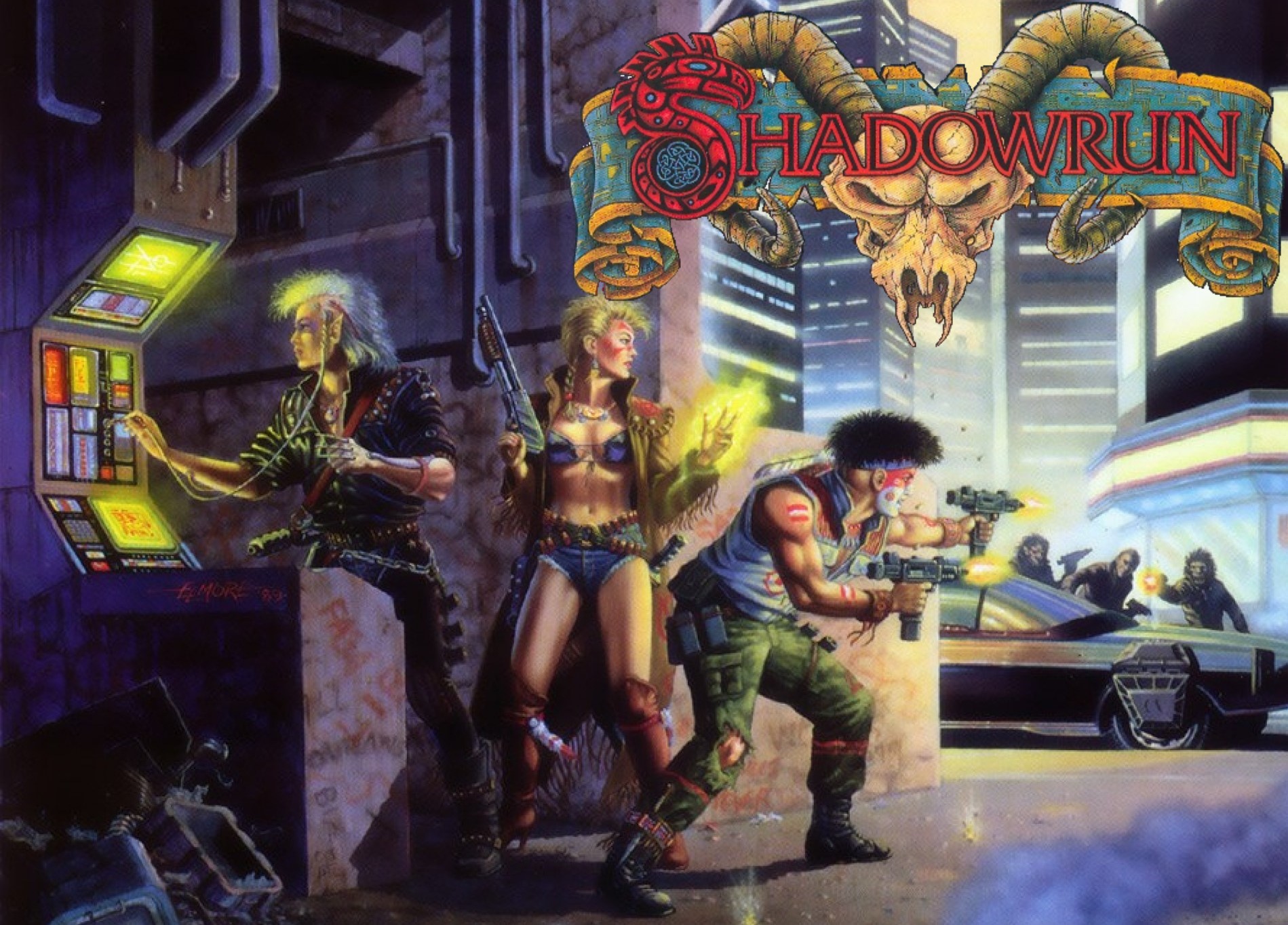 Okay…those who follow me on social media have already heard me talking about this bundle from Bundle of Holding, but Shadowrun 1e-2e Mega Bundle is literally where I started in tabletop roleplaying. I owned every one of these books and read and re-read them so many times that they almost fell apart (and actually did in the case of my Shadowrun 2nd Edition Core Rulebook). To me, the books included in this bundle are still the gold standard in game writing and worldbuilding for a roleplaying game setting. The bundle includes not just the core rulebooks and the supporting sourcebooks for Shadowrun 1st Edition but also classics like Universal Brotherhood, Harlequin, Corporate Shadowfiles, Shadowbeat, and more. The add-on expands the collection into Shadowrun 2nd Edition with all the core books plus sourcebooks still useful in Shadowrun to this day for history and worldbuilding such as Aztlan, Tir Tairngire, Portfolio of a Dragon: Dunkelzahn’s Secrets, Threats, and a lot more. And seriously, if anyone has any questions about any of the books in this bundle, feel free to ask me in the comments or on social media because I am always ready to talk about some of my favorite game books ever published and have read every one of these cover-to-cover multiple times.

Not only did I get to talk about Shadowrun earlier, but Humble Bundle has extended their Introduction BattleTech bundle for another two weeks! It really is a special holiday! This bundle features everything you need to play the tabletop wargame BattleTech along with its faster-play variant BattleTech Alpha Strike along with a library of lore sourcebooks invaluable to anyone playing the roleplaying game versions BattleTech: A Time of War or MechWarrior: Destiny. Not only that, but the top-tier pledge level includes the physical BattleTech Beginner Box with two plastic minis, cardboard tokens for other ‘Mechs and vehicles, a map, pilot cards, reusable record sheets, and more to jump right into the fight.


That’s all for this week! If you know of any bundles or sales starting soon, please contact me on the EN World Discord, tag me on Mastodon, or send me a message here on EN World. Discount percentages have been rounded to the nearest whole number and are based on the standard retail price provided by the site. Note: Links to Amazon, Humble Store, Humble Bundle, Fantasy Grounds, and/or DriveThruRPG may contain affiliate links with the proceeds going to the author of this column.
Click to expand...

Darryl Mott is a tabletop gaming and media journalist with bylines from outlets including Ain't It Cool News, EN World, and Zombie Orpheus Entertainment. He also makes videos for YouTube and does live streams on Twitch as well as doing post-production and editing for the Morrus' Unofficial Tabletop RPG Talk podcast.
F

Hey Darryl, thanks for all the great freebie tips. One thing, you may want to change Glenn Huston's description from "adventures" to adventure hooks or encounters. To call them adventures is a bit generous since there are no maps, stats, etc. I don't mind throwing $6 bucks to a creator (I bought them all) I just don't want anyone else to think they are getting full 20 page adventures. Thanks again!
Last edited: Dec 4, 2022

The pdf preview for the Witcher RPG is really messed up. None of the text is readable. I don't mean I don't like the font, I mean it's literally not readable - it comes out as garbled placeholder thingies instead of text.

jeffh said:
The pdf preview for the Witcher RPG is really messed up. None of the text is readable. I don't mean I don't like the font, I mean it's literally not readable - it comes out as garbled placeholder thingies instead of text.
Click to expand...

Showed up fine to me. Maybe it's a problem with your PDF reader? 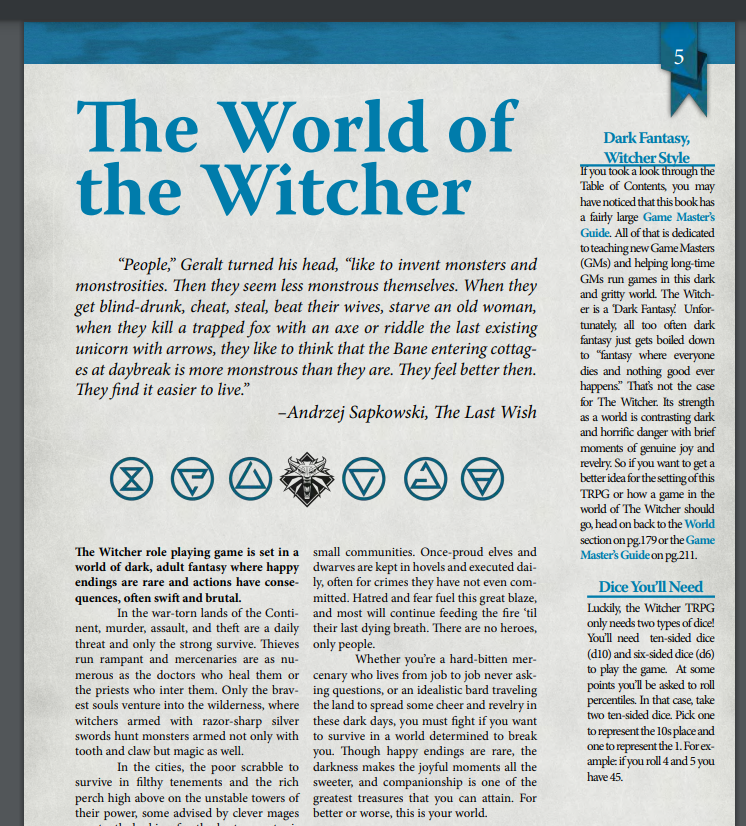 Huh. Well, in the one built into Firefox, whatever that may be, it's hot garbage. Or it's possible my download of it got corrupted somehow.

jeffh said:
Huh. Well, in the one built into Firefox, whatever that may be, it's hot garbage. Or it's possible my download of it got corrupted somehow.
Click to expand...

Yeah, I just tested it on my end. The screenshot's from Chrome, but when I went to Firefox it turned into a garbled mess. So whatever's happening is something between the PDF and Firefox.