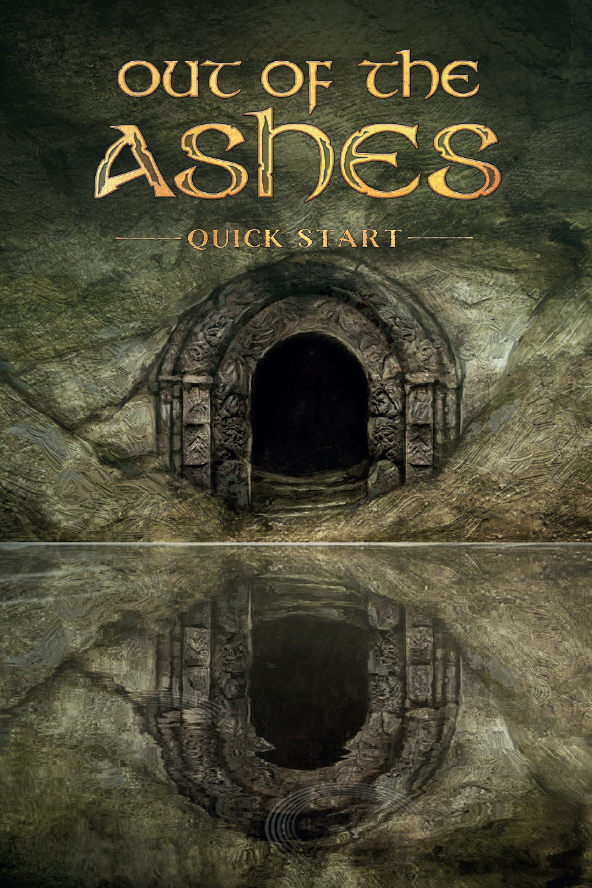 Starting out on Itch.io, Alton “Sir Chicken” Wayne released There’s Treasure Hidden in Snake Head Cave, an adventure for the Challengers of Vanth “gonzo science” setting for MÖRK BORG. Old map, buried treasure, monster catacombs, yadda yadda, you read the title and the system, you know exactly what to expect.

Over on DriveThruRPG, Ubique Publications posted Welcome to Grimsbury: Player’s Guide, a roleplaying game of English folk horror. Think The Wicker Man (either the original or the NOT THE BEES! remake), classic Doctor Who, Children of the Stone, and the like. There’s also a Spotify playlist to set the mood and a Discord server to find players and games.

Modiphius released a quickstart for Out of the Ashes, a post-apocalyptic fantasy RPG set after the Great War and the good guys won, but left a world broken and corrupted from the battle. The system is an evolution of the Liminal RPG from Paul Mitchener which was originally Kickstarted back in February 2021.

For players of Hunter: The Reckoning, we have the setting book Caldene detailing a small town in Alberta, Canada, by Blake Ryan. The book can also be converted for use in Hunter: The Vigil, Mage: The Ascension, or Werewolf: The Apocalypse or used for any cold or sub-arctic area.

Old School Role Playing released a new adventure for the Cepheus Engine (the system that powers Traveller), All That Glitters is Gold. The players are sent after a criminal hiding on a desert planet by a respectable looking woman willing to pay well for his arrest (or corpse), but they’re going to have to work to earn their bounty.

And if you want a sci-fi adventure but can never find one for your system of choice, Raymond Towers has a system-agnostic adventure Non-Retrieval. The mission seems simple enough – bring the squad of Space Marines to the outpost, discover why it went silent, and come home. Of course, it’s never that easy, especially when your transport vanishes stranding you on the alien planet.

Over on DM’s Guild, Glenn Huston gives us a third level adventure called Shrine Stalker. The party must deal with a creature ambushing people at a nearby forest shrine.

Bards are the artists of the D&D classes, and Guilherme Zorzon has a new take on the class that explores that with the College of Brushes. You see everything as a blank canvas waiting to be shaped by pattern and shape, translating this ability into controlling the battlefield.

Gnomes rarely get much love, and John Beardify looks to remedy that with The Book of Gnomes featuring five new gnome subraces to bring more variety to the secret world of the gnomes.

I know spooky season is over and many would find this counts, but Fayeloft has a new full player class for 5e in The Clown. There are also three full subclasses including the Circus Clown, Rodeo Clown, and Mime. Because this column goes out on Sundays, there are likely to be a lot of big sales next weekend as Black Friday starts, so keep an eye on sites like Amazon for big discounts on RPG products.

Bloat Games collected the Hack the RPG Games Bundle. Rather than a typical generic RPG, Hack the RPG is designs specifically to make it easy and fun to create your own roleplaying game using a fast, loose set of rules from a combination of Black Hack and The Blackest of Death Game System. The bundle comes with the core rules along with three example RPGs made with the system ranging from urban fantasy to pulp tomb-diving adventure to 80s cartoons.

Rosethrone Publishing put together a collection for the adventure A Shadow Over the Greatwood for the Swords & Wizardry system along with accessories to help run it. The adventure itself is a sandbox adventure for level 5-7 characters as wild animals start encroaching on human civilizations bringing fears of what lurks in the forest to drive them out. The bundle also includes a three maps of the area annotated for GMs, for players, and an unlabeled map.

If that’s not enough Traveller for you, the second bundle is the Traveller Great Riftv featuring the 402-page setting book The Great Rift and the 320-page campaign book set there, Deepnight Revelation. The bonus collection adds on an additional nine adventures and sourcebooks.

Green Ronin Publishing and Bundle of Holding have a super bundle for you with the Mutants & Masterminds Earth-Prime Bundle. I apologize, that pun was beneath me. Anyway, the Starter Collection features the Basic Hero’s Handbook stripped-down core rules along with the Rogues Gallery collection of supervillains and the campaign setting Freedom City. The bonus collection adds on the full Deluxe Hero’s Handbook, the Atlas of Earth-Prime gazetteer, and the teen superhero sourcebook Hero High.

Twin Sails Interactive has a bundle full of digital board games and DLC expansions based on tabletop board games. The highest-tier features a total of 37 Steam codes for Ticket to Ride, Carcassonne, Splendor, Smallworld, Game of Thrones: The Board Game, Blood Rage, and Mysterium along with expansions to add more options to the games.

The Give the Gift of Pathfinder and Starfinder bundle from Paizo and Humble Bundle has been extended! The base level gets you digital copies of the beginner boxes for Pathfinder 2nd Edition and Starfinder along with a selection of adventures, the second tier adds on the Pathfinder 2e Core Rulebook and Bestiary, the Starfinder Core Rulebook and Alien Archive, and even more adventures with select flip maps, the third tier is a full 41-item library of books for both systems, and the top-tier level adds on the physical edition of the Pathfinder Second Edition Beginner Box (shipping extra).

This is a great chance to grab the LevelUp Books at a steep discount. While I have not yet looked at the "Advanced 5E" bits in the Adventurer's Guide, and was impressed more with the solidity than the flair of the Monstrous Menagerie, I am finding the Trials and Treasures (DM's Guide) to be worth the price of admission alone. It's a far more modern, organized and beginner friendly guide to how we play RPGs today than the 2014 Dungeon Master's Guide was, and I am salivating over digging into the work done here to greatly expand and deepen the Exploration pillar of play.