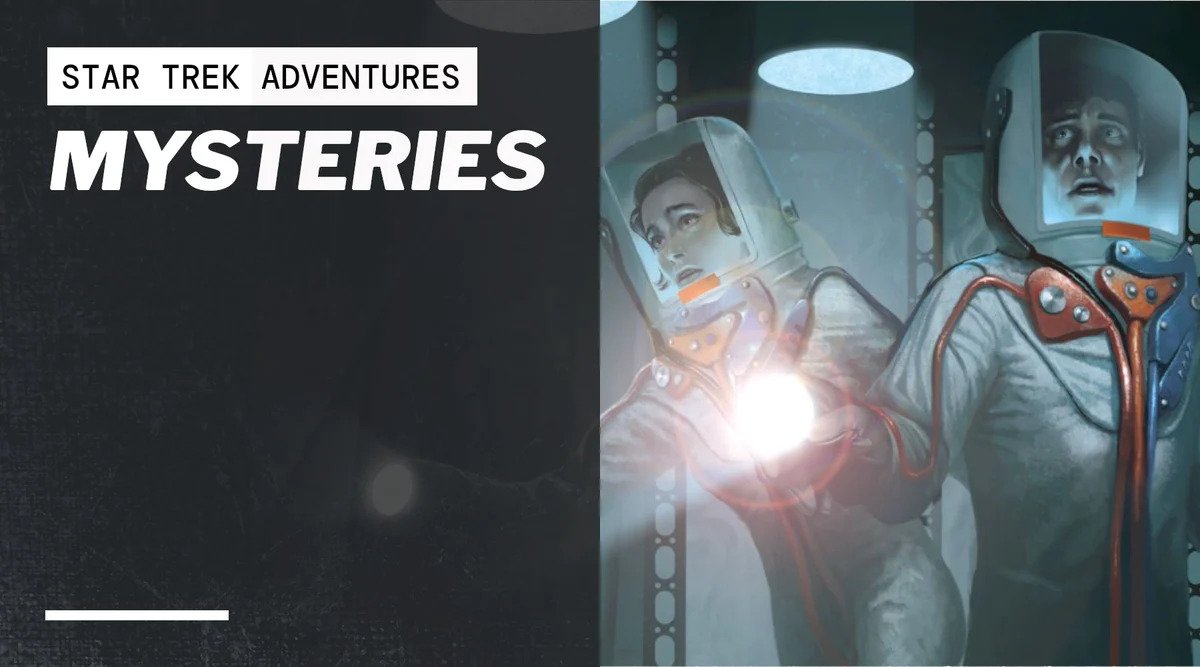 Modiphius released a new Star Trek Adventures Briefs with ten short mission prompts, this time themed around Mysteries. Set in the TOS era for Starfleet crews (though can be modified for other campaigns), the ten adventures focus on the strange and wondrous things in the galaxy and challenges the players to solve the mysteries behind them.

The woodlands aren’t quite that peaceful in the Magpie Games RPG Root as various animal factions fight for control. This Quickstart bundle includes all the basic rules to try out the game, pre-generated characters, and three adventures to run: Pellenicky Glade, Bertram’s Cove, and Talon Hill.

Gildor Games has yet another free release for the sci-fi RPG Elemental, a new adventure titled The Probe. There’s a neat bonus for this one though: Rather than boring read-aloud text, the adventure links to YouTube videos of scenes from the adventure rendered in full detail for a more immersive tabletop gaming experience.

Tom Gray released the roleplaying game Sexy Hairdresser Vampires, which I think sums up what to expect just from the title. This Lasers & Feelings hack places the players in the roles of sexy hairdressers who are also vampires facing a new terrifying ancient evil each Wednesday.

Over on Dungeonmasters Guild, Amonshi released The Legend of the Ice Lady, an adventure for 1st-4th level characters. “Explore the mysteries concealed in an icy mountain, including yetis, a magical castle floating over the clouds, and the legends of a powerful fey being that dwelt there in ancient times.”

If you’ve ever wanted a more gritty playstyle for your D&D games, Anthony Castillo has you covered with Rules for Sword and Sorcery. This book of suggestions and rules variations will help you emulate the style of Conan or Fafhrd and the Gray Mouser to D&D with new rules for combat, healing, magic, economy, and more.

If you want some new Warlock options, J. Gabriel Ronkainen has Timeless Patron, a new patron from beyond time and space with six new Eldritch Invocations. Also a note from the author: “All past and future proceeds for all of my titles on DM's Guild store after the WOTC's licensing fee are permanently donated to the Red Nose Day charity! ”

Glenn Huston released Terror in the Dark, an adventure for 3rd level characters. The players must investigate the caves where first a child and then a pair of seasoned survivalists disappeared and find out what happened to them and what may have taken them.

It's another big map week! Each of these is either free or Pay What You Want with the suggested price in parentheses.

Well, we’ve got a lot to get through here so let’s start with OneBookShelf’s big Black Friday/Cyber Monday sale. The DriveThruRPG sale has discounts on 64,815 items while the Dungeonmasters Guild has discounts on 15,727 items.

The D&D Beyond Cyber Deals sale has discounts on almost everything across the entire website from Dungeons & Dragons books to virtual dice to subscriptions. In fact, the only thing I could find on the site that isn’t discounted is pre-orders for Dragonlance: Shadow of the Dragon Queen.

Paizo is running the Accessorize Your Game sale on minis, game cards, GM screens, T-shirts, and more including “non-mint” game books. This sale also stacks with other discounts including Paizo Advantage.

The Steve Jackson Games webstore Warehouse 23 has their big holiday sale. In addition to discounts on various products, there are also freebies based on the size of your order starting at $20 and adding more items up to $125.

There’s also a huge bundle of third-party Fantasy Grounds material on the DMs Guild in the Unseal the Deal 2022 Bundle. This bundle collects 14 sourcebooks and adventures for 5e in MOD format ready to be imported into Fantasy Grounds.

And of course Roll20 also has a Black Friday sale going with discounts on books and bundles from Cyberpunk RED, Savage Worlds, Scion, third-party 5e material, maps, tokens, and special mention for the EN Publishing War of the Burning Sky campaign.

Dreamscape Designs has provided a discount code for orders of their products through Lulu. Use the code JOYFUL30 for a discount on BLUEHOLM Prentice Rules, BLUEHOLM Journeyman Rules, BLUEHACK, and The Necropolis Nuromen.

Goodman Games has a code for their webstore for discounts on Dungeon Crawl Classics, Mutant Crawl Classics, Xcrawl, and more. These codes work on top of the existing sales on the site as well! The code GOODHAUL2022 is good for 40% off Goodman Games items while the code 3PPHAUL2022 gets you 20% off third-party items. You can use both coupons on the same purchase so no need to place two orders to get both Goodman Games products and third-party products, but only one coupon code will apply to any given product.

The 2022 Black Friday Bundle on DMs Guild features five volumes of Almanac of the Hells, the 5-7th level adventure Academy of Devastation, new options for goblinoids and thri-kreen, a new take on martial class options, and more.

And, of course, the Humble Store has their Black Friday sale going on as well. Pick up big discounts on licensed tabletop RPG video games including Cyberpunk 2077, Pathfinder: Wrath of the Righteous, the port of the arcade classic Dungeons & Dragons: Chronicles of Mystara, Total War: Warhammer, MechWarrior 5: Mercenaries, BattleTech, Shadowrun Returns, and Shadowrun Dragonfall plus hundreds of other video games. Also, 5% of your purchase price goes to charity!

There’s also a nice mix of stuff on the Cornucopia 2022 bundle from Bundle of Holding. The Starter Collection features Wolves of God (a dark ages England RPG from the creator of Worlds Without Number), Jiangshi: Blood in the Banquet Hall (a game about Chinese immigrants running a family restaurant and fighting off hopping vampires), and Wanderhome (a pastoral game about animal travelers). The Bonus Collection adds on Hard Wire Island (retrofuture cyberpunk in space), Defiant RPG (supernatural aristocrats defending their Holdings), ARC Doom (stop the apocalypse that’s ticking ever closer on a real-world Doomsday Clock), and Viking Death Squad (the name kind of acts as a good description here).

If that’s not enough Traveller for you, the second bundle is the Traveller Great Rift featuring the 402-page setting book The Great Rift and the 320-page campaign book set there, Deepnight Revelation. The bonus collection adds on an additional nine adventures and sourcebooks.

The Give the Gift of Pathfinder and Starfinder bundle from Paizo and Humble Bundle has been extended! The base level gets you digital copies of the beginner boxes for Pathfinder 2nd Edition and Starfinder along with a selection of adventures, the second tier adds on the Pathfinder 2e Core Rulebook and Bestiary, the Starfinder Core Rulebook and Alien Archive, and even more adventures with select flip maps, the third tier is a full 41-item library of books for both systems, and the top-tier level adds on the physical edition of the Pathfinder Second Edition Beginner Box (shipping extra).


That’s all for this week! If you know of any bundles or sales starting soon, please contact me on the EN World Discord or send me a message here on EN World. Discount percentages have been rounded to the nearest whole number and are based on the standard retail price provided by the site. Note: Links to Amazon, Humble Store, Humble Bundle, Fantasy Grounds, and/or DriveThruRPG may contain affiliate links with the proceeds going to the author of this column.
Last edited: Nov 27, 2022
Click to expand...

D&D Beyond will have some books marked down to $19.99 on Monday.