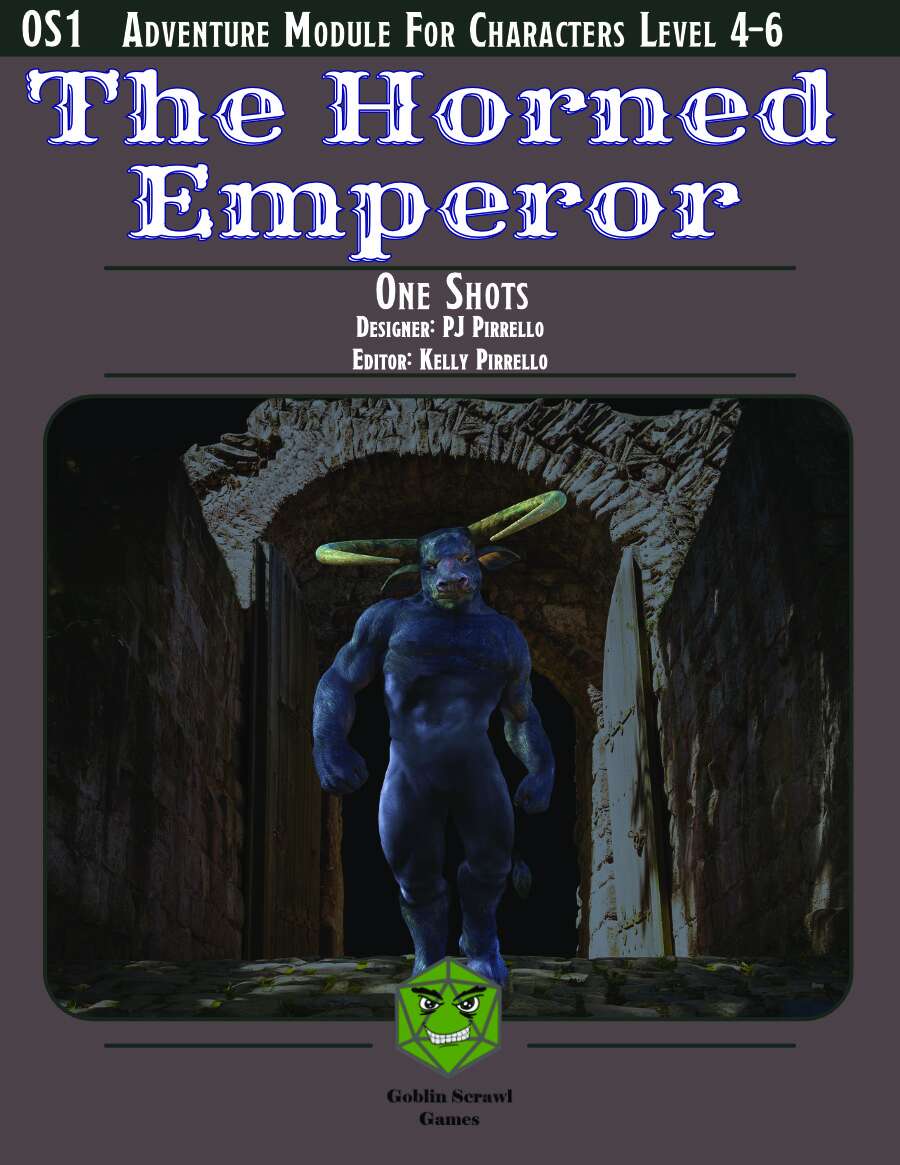 With the spooky season upon us, it’s time to make sure you’re ready for your horror games. And Knightmap has four modern day maps ready for your horror games. Camping Horror, Forest Horror, House Horror, and Street Horror are all available in 4K JPGs for a 40x30 map with versions with and without grids and mist effects. And if you like these, there’s a collection available with Cornfield Horror with multiple maps of cornfields with different weather effects available for $1.99 (80% off).

Goblin Scrawl Games released The Horned Emperor, a 5e adventure for a party of 4th to 6th level characters. The minotaur king of a long-dead goblinoid empire was sealed in his timb to prevent him from reigning from beyond the grave before being lost to time…until now. The bundle also comes with complete stat blocks for all monsters to cut down on cross-referencing and a VTT-ready map.

You know I love my random table products for their use in brainstorming and quick prep, and Christian Blair has a great one with D100 Desert Encounters & Events. The collection of 100 events vary in complexity and challenge with both combat encounters and random events to use for possible adventure hooks.

Keeping track of consumable items can sometimes be a pain, but Flash Hammer Creative Studios has a solution with the Alchemist Shop – Player Set. This set of ready-to-print cards can be cut out and used to keep track of who has what potion when along with a generic-rules description of their effects (though it may require some adapting for your fantasy RPG system of choice).

I don’t know why, but for some reason creators on Dungeonmasters Guild seem to run in tends with a lot of related content popping up at the same time. This week, we got a ton of new classes and subclasses from a wide variety of creators. All these titles are Pay What You Want with the suggest price listed at the end. 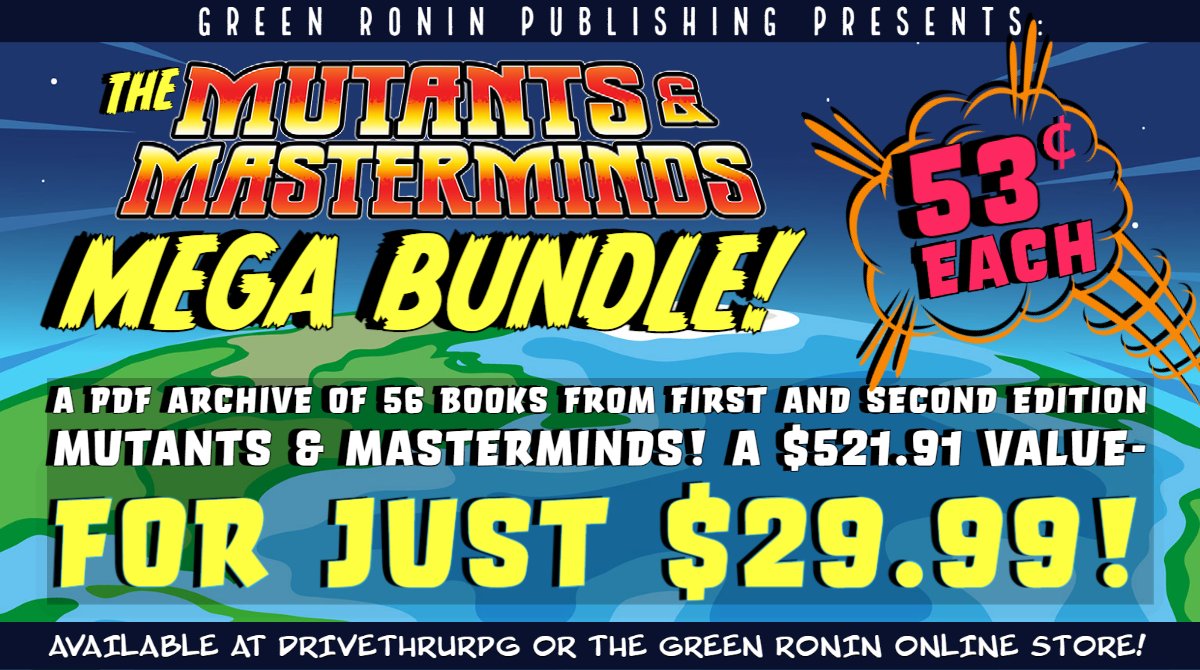 Green Ronin Publishing released a megabundle for Mutants & Masterminds that lives up to the name with 56 PDFs from both first and second edition. The bundle includes the core rulebooks for both first and second editions, the Freedom City campaign setting for both editions, and a giant collection of additional sourcebooks, adventures, campaign settings, and more.

Roll20 also has their own megabundle, this time with Paizo for Pathfinder 2nd Edition. The Pathfinder Mega Bundle includes Pathfinder Bestiary 1, Pathfinder Bestiary 2, the stand-alone adventure The Fall of Plaguestone, the adventure anthology Troubles in Otari, a short one-shot adventure Dinner at Lionlodge, and the first adventures in two different Adventure Paths: Extinction Curse: The Show Must Go On and Strength of Thousands: Kindled Magic. You can also pick up the Pathfinder Core Rulebook on sale separately at Roll20 for $19.99 (66% off).

Color Spray Games is celebrating Hispanic Heritage Month on Itch.io with a bundle of work from creator Simon Moody. The bundle features ten RPGs from a variety of genres and inspirations including stone age fantasy, borderpunk, survival horror, souls-lite, and even a musical RPG.

The DriveThruRPG September System Sale is onto its third week with the Year Zero System. Pick up some amazing games from Free League including Alien RPG, Tales from the Loop, Vaesen, Twilight: 2000, and a lot more including sourcebooks and adventures. 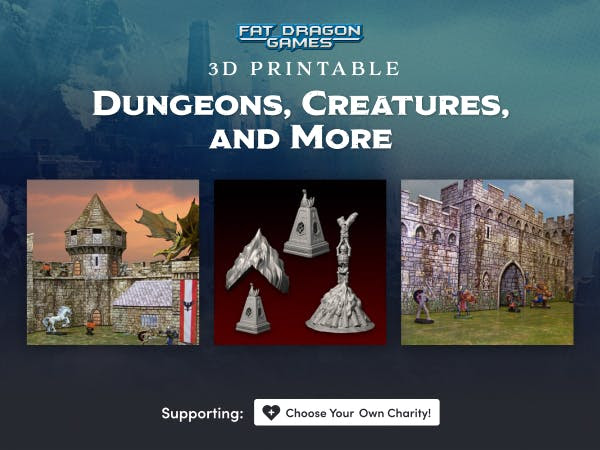 Over on Bundle of Holding, the newest bundle features “acid-fantasy” adventure RPG Troika! The Starter Collection includes the Troika Numinous Edition Core Rulebook along with three third-party adventures and campaigns, while the Bonus Collection adds on three more adventures plus the six issue compilation Aetherjack’s Almanac.

Green Ronin brings us a bundle for True20, the streamlined d20-based RPG derived from Mutants & Masterminds. The Core Collection gets you the True20 Revised Corebook and the True20 Bestiary with everything you need to play, while the Bonus Collection adds on three True20 role handbooks along with expansions for fantasy paths, true sorcery, and cybernetics.

3D printer owners, are you ready for another huge collection of ready to print STL files? The Humble Bundle 3D Printable Dungeons, Creatures, and More Bundle from Fat Dragon Games features terrain, minis, buildings, accessories, decorations, and even plans for a holder for minis to ease painting. The bundle comes in three tiers but I’m not even going to attempt to summarize what’s included as each of the items is itself a bundle of related STL files making for the “58 items” listed as the top tier purchase a misnomer as it includes hundreds of designs.

The Black Library is back on Humble Bundle with a collection of Warhammer 40,000 audio books and fully produced audio dramas. The lowest level gets you five full novels including the first books in the series Vaults of Terra, Watchers of the Throne, Dawn of Fire, and Dark Imperium series plus the novel Eye of the Night and a sampler collection, while the second tier adds on an additional seven titles (including the second books in each of those series) and the top tier contains a total of 21 books finishing out all those series plus a lot more.

Humble Bundle and Cubicle 7 is ready to help you have adventures across time and space with their Doctor Who bundle. This isn’t the 5th Edition version, but the BBC-licensed custom rules system built specifically for adventures in the TARDIS. Even the base $1 level gets you the first edition core rulebook for the custom rules system along with three adventures while the $10 level adds on the Aliens & Creatures guide and sourcebooks for the first three incarnations of The Doctor and the top-tier $18 level gets you the Twelfth Doctor Edition of the core rulebook, sourcebooks for all the Doctors up to the Twelfth, books for Companions, UNIT, and the Black Archive, and a lot more for a total library of 28 books.


That’s all for this week! If you know of any bundles or sales starting soon, please contact me on the EN World Discord or send me a message here on EN World. Discount percentages have been rounded to the nearest whole number and are based on the standard retail price provided by the site. Note: Links to Amazon, Humble Store, Humble Bundle, Fantasy Grounds, and/or DriveThruRPG may contain affiliate links with the proceeds going to the author of this column.
Last edited: Sep 18, 2022
Click to expand...

The link for "Classic Spelljammer Ships" is wrong.
It should be: Bolongo said:
The link for "Classic Spelljammer Ships" is wrong.
It should be:

Been a few weeks since a copy-paste error caught me. Fixed it now.

Just so you know, the "Classic Spelljammer Ships" link is still wrong up the page. It goes to a Warlock Patron.

Also, thanks for providing all of us the info you put together every week. I always look forward to it and am grateful for your efforts.

That M&M bundle has a number of books never offered in PDF form, going to have to get that.

The M&M and Doctor Who bundles are quite tempting. Lots of great stuff there.

Adventurer! This Apocalypse Engine 5 Bundle is our fifth offer of tabletop roleplaying games Powered by the Apocalypse – that is, based on Vincent and Meguey Baker's landmark indie RPG Apocalypse World. Since our last Apocalyptic offer in May 2020, new PbtA games have hit the hobby with great...