RuneScape, the game that started as a browser-based RPG in 2001, is coming to the tabletop! Two games have been announced -- a boardgame and a tabletop roleplaying game, both slated for a 2022 release. While the boardgame will hit Kickstarter this year, the RPG will not, and will instead head straight to stores.

According to Wikipedia, RuneScape is "recognised by the Guinness World Records as the world's largest and most-updated free MMORPG" with over 200 million accounts. 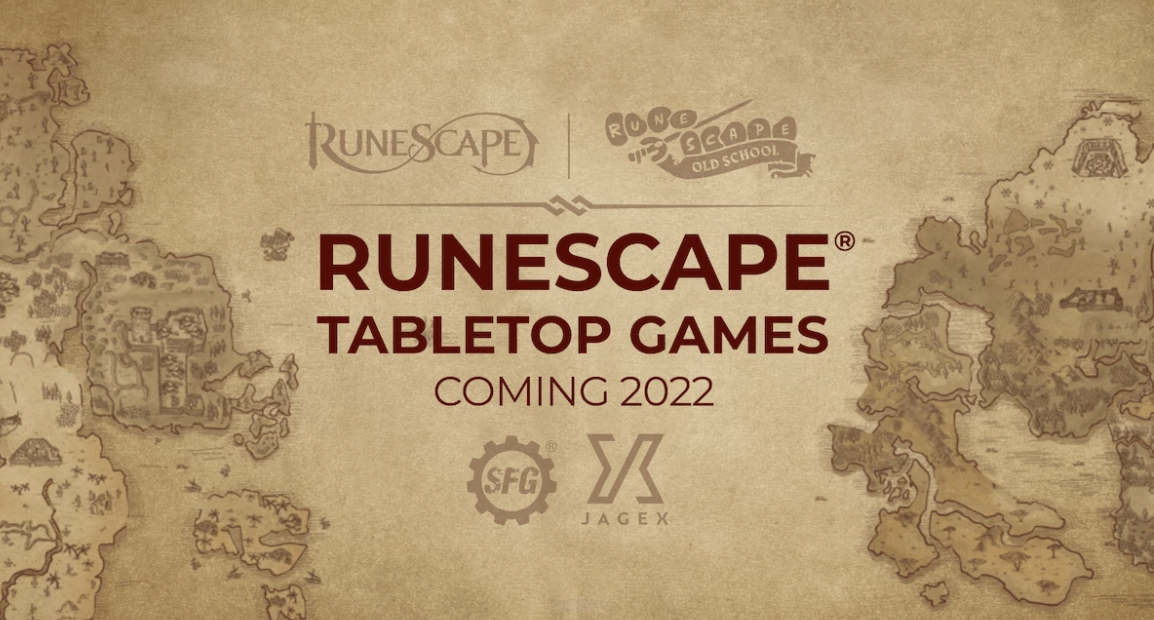 Ready your rune armour, put on your party hats, and get ready to roll, ‘cause RuneScape is finally coming to the tabletop!Steamforged Games is over the (Zanaris) moon to be partnering with Jagex to bring RuneScape to the tabletop — not once, but TWICE.Head off on thrilling quest-based campaigns...


RuneScape, one of the most popular and longest-running online role-playing video game franchises for PC, MAC, and mobile, is coming to tabletop gaming with two brand new games launching later this year.

Jagex, the leader in developing and publishing deep, community-driven video games and home to RuneScape, has teamed up with tabletop-gaming powerhouse, Steamforged Games, to create both a board game and tabletop roleplaying game (TTRPG) core book inspired by RuneScape’s rich fantasy world of Gielinor. Both games will make their debut in 2022, with the board game launching on Kickstarter and the TTRPG heading straight to stores.

Both games are set to delight RuneScape and Old School RuneScape’s player communities with fresh-but-faithful adaptations of classic quests and characters that weave iconic elements of the games into exciting tactile experiences reimagined for tabletop gaming.

The games will draw on adventures, characters, and locations from across RuneScape’s rich 21-year long history, with the board game taking between one to five players on quest-based campaigns through Gielinor. They will craft and upgrade equipment, upskill their characters, cook special recipes, engage with NPCs, and test their skills while exploring different regions of the world, with a variety of enticing side quests to distract and entertain them on the way.

The TTRPG will consist of a lavishly illustrated, hardback core book containing rules for players to run a RuneScape tabletop roleplaying game, in which they can build their own characters, explore Gielinor, and create unique and exciting quests. The TTRPG core book is also fully compatible with the fifth edition ruleset of the world’s favourite roleplaying tabletop game.

The RuneScape games will mark Steamforged’s twelfth adaptation of a video game for tabletop. Past adaptations have included the Monster Hunter: World board game, which grossed £3.4million on Kickstarter in 2021.
Click to expand...

I remember my kids playing this and watching it evolve over the years. Interesting! I’ll have to tell them.

It's most definitely not the world's oldest MMO that's still running. Both Ultima Online and Everquest 1 are still going, and both started before 2000.

I've never player Runescape, but I'd definitely like to see a Guild Wars 2 TTRPG. There are some homebrew mods for 5e out there, but none of them really captures all the classes or setting yet.

As someone who's sunk an immeasurable amount of time into every iteration of Runescape, and still hasn't reached the current level cap, I'm very excited for this.

Sonny said:
It's most definitely not the world's oldest MMO that's still running. Both Ultima Online and Everquest 1 are still going, and both started before 2000.
Click to expand...

I think they meant the world's oldest free MMO.

So what system is being used for this tabletop adaptation?

That is what's in the title...
I wonder if the TTRPG is a response to decline in the MMO....

Looking at their list of releases on RPGG, their portfolio isn't impressive - around 20 products in 3 lines, all D&D 5E derivative, two being Anthropomorphics.
Their web and twitter show those plus several CRPG to TTRPG crossovers... lost of minis.

That RPGG is lacking their crossovers in the database speaks poorly of them. (Because it means no one was impressed enough to bother entering them, perhaps even to buying them - RPGG is most useful for the database.) It implies being rather obscure.

The only thing I know about Steamforge is that they used to have a competitive miniature game called Guild Ball that literaly replaced Warmachines in my area - not a small feat to do. They had tournaments and events. Then one day they announced the end of the game saying it had become too competitive. Which is weird because they launched the game saying it was designed for hard core competitive play... made everyone very angry.

Now they have the GodTear miniature game. Not trusting them.

I never played Runescape. I loved playing Ultima Online but there's only so much time in the day. So back in the 00's I was playing 2e D&D, Ultima Online, Total Annihilation (later TA Kingdoms), and then got heavy into 3e by the time Runescape would have had a chance to squeeze in. The timing just wasn't there. I didn't run into Runescape again until recently. We hired a new night security guard to man the cameras at our warehouse and I saw him playing Runescape on his laptop. For the longest time I thought people playing Runescape was a meme or like a name nerds would drop to one-up each other, "I play EQ." "Oh yeah? I still play Runescape."

I suppose 5e would be an easy fit. Runescape is basically just killing things and getting money. That's murderhobo D&D right there.

I hope it includes rules for searching for rare trees to repeatedly chop down so I can grind my Woodcutting skill to lvl99. /s

Podcast #185: Homebrew and Hacking: Crafting New Heritages and Cultures for Level Up 5e