We at EN World love our indie RPG crowd and the wide range of interesting games produced with resources far more limited than a major company can access. Supporting the indie crowd is as important as ever, especially in these tougher times. 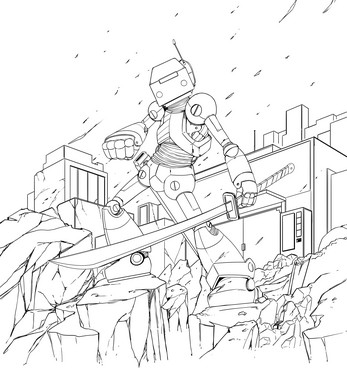 Made in DNA has provided us with a copy of their Name Your Own Price (PWYW) after-human RPG, Samurai Androids. Samurai Androids is a minimalist RPG; you won’t find a lot of excess and minutiae that you might find in a more robust design. The playtest version provided us is only around ten pages, but those pages contain the heart of the game. Everything a GM and players needs is right there.

As you can imagine, the aesthetics are minimalist. My copy has only a single piece of art and that is the title graphic. But that is the point of a minimalist creation. Instead of focusing on the visuals aesthetic then, I want to talk about the setting of Samurai Androids. Described as an After-human Japan, it is a world of urban decay and chaos, though how much is left up to the discretion of the Game Master (GM). Japan’s population had been on the decline for some time, a nod to a real-world issue that nation faces. The creation of worker and companion robots begins in earnest in 2075, but after some time, the human population died out leaving the androids alone in their hellscape. My impression is that after-human Japan is a cross between a neon-noir and a digital Japan, recreated in a semi-feudal state. Think of it as Samurai Jack but with all androids. This minimalist backdrop is an excellent canvas onto which the GM and players can paint their own version of the apocalypse. It also avoids issues of Orientalism, as it pays homage to the aesthetic without trying to make a detailed post apocalyptic Japan.

Aspects of character follow their own aesthetic. Androids have I/O parts and their brain is a Kernel. Each has cartridge slots for additional skills. This evokes the idea of hardware, reinforcing the idea that the android characters are not human.

Samurai Androids is a game of options. This is evident in every part of character creation as well as the conflict resolution. Characters have a choice of Chassis and Occupations, the latter of which provides them with a single skill. In terms of resolution, the d10 is the die of choice and, depending on options, can be used in d10 or d100 (%) form. Androids (players) can attempt any task, called Situations, but if they have the Occupation Skill OR a Cartridge it will give a bonus. Cartridges are skill slots, something most cyberpunk genre fans will recognize. Tasks are resolved by rolling low. There was a little confusion here in the rules, where it was stated that the character must roll low and yet lower numbers are easier. I suspect this may have been a version conflict, but the rules do mention lower is better and I had no problem with some practice rolls.

Combat runs along the same lines. Initiative is rolled on a d10 before combat occurs. It goes from highest to lowest. Combat tests are easy enough and each android rolls against every opponent it faces. High roll wins and the defender gets all ties. Damage is then dealt, although an android Samurai can only die if their Kernel is destroyed.

Minimalist games are fun to dive into, though they are not for everyone. Samurai Androids works as a framework that you can build your own “all the humans are dead” story around, but it offers you choices even within the framework. I definitely think it makes for a great beer-n-pretzels RPG you can break out on short notice. Made In DNA has a short story and some other updates and supplements available for the game from their itchi.io site.

P
Various ways of setting up and starting RPG play
2