The lesser of two stars in a binary system, Frentellis B suffered a system-wide disaster shortly after the broadcast of the Signal. The indigenous race, the Crustecar, long at war with the wranglers and living ships of Frentellis Prime, were saved only by the return of colonists from nearby systems. The reduced clans have staked claims in the debris belt orbiting the star, now augmented by thousands of derelict ships of all stamps and technologies, continually refreshed by the ongoing Drift anomaly. This graveyard of ships, a scavenger's utopia, is known as The Breakers' Yard.

This stand-alone star system set integrates well with The Frentellis Prime star system set for those groups wishing to spend more gaming time in this sector. It also fits perfectly into the Earl Grey, Hot adventure for Starfinder!

Star System Sets offer new planets to explore, dangers to overcome, lifeforms to study, and cultures to document. Modular enough for any campaign, each double-sided card presents a complete ruleset for ease of reference, allowing GMs to fill in the blank spots on their star charts. Card types include Race, Planet, Character Options, Equipment, Monsters, and Mini-Adventure. 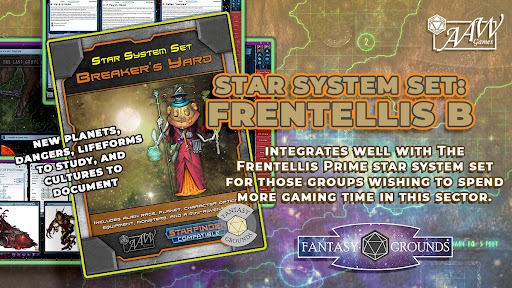