Starfinder RPG - Starfinder Adventure Path #40: Planetfall
With the discovery of an uncharted, resource-rich, and uninhabited planet in the Vast, several factions begin a joint settlement effort, and the heroes are given the chance to be the scouts and administrators of one such charter. As they explore the surrounding wilderness and grow their new settlement, they must contend with all manner of problems, from wild animal attacks to dissatisfied settlers. And the planet holds mysteries beyond counting!

"Planetfall" is a Starfinder Roleplaying Game adventure for four 1st-level characters. This adventure begins the Horizons of the Vast Adventure Path, a six-part, bimonthly campaign in which the heroes are at the forefront of exploring and charting a world filled with mystery. This volume also includes a new system for expanding a fledgling settlement on a new planet, a player's guide, and a selection of strange alien creatures.
desert 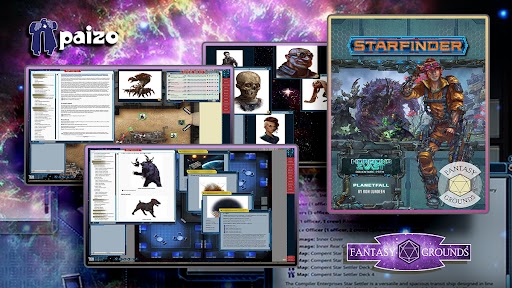